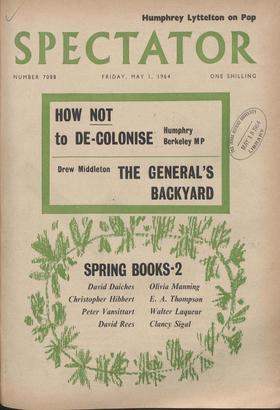 The Way Out for Cyprus

O NE of the few bright spots of the Cyprus crisis until recently has been the com- parative moderation shown by both the Greek and Turkish Governments, and their refusal to...

IDEOLOGICAL DISPUTES continued and faction fights flared up: with the revisionists winning a compromise in the battle over Mr. Heath's price-fixing Bill, Mr. Quintin Hogg...

What is a Majority?

T HE House of Commons this week debated with restraint and without a division the situation in British Guiana. Whatever their reser- vations about Mr. Sandys's proposals for an...

T His country has got itself into something of a mess over town and country planning. In recent years economic and human pressures have produced an alarming complexity of prob-...

Picking and Choosing By DAVID WATT A PART from his celebrated apercu on the sub- ject off his old chum Selwyn Lloyd's fitness for high office, the passage of Lord Kihnuir's...

How Not to De-colonise

Z ANZIBAR is an example of how not to de-colonise. From start to finish (if we have seen the finish) the British Government un- characteristically has made every mistake that...

The Long Years of the Dictator

By ELIZABETH MORRIS D R. ANTONIO D'OLIVEIRA SALAZAR was seventy-five on April 28. For thirty-two years he has been Premier and effectual dictator of Portugal--no other...

From DREW TN the United States or in Britain nothing 'whets political appetites like the illness of a party leader. Ordinary public servants suddenly discover talents for...

From PETER ROWLEY NEW YORK T HE day after my return from England to New York I got a , postcard from the Daily Princetonian, urging me to subscribe and assuring me that my...

I thought there was a particularly interesting piece in the Nation the other day on the Bay of Pigs fiasco. The writer was Jean Edward Smith, a former regular US Army officer,...

Light Through the Tunnel A series of nine essays by

WITH a slight fall-off of entries, the Academy's Summer Exhibition, open- ing this week, has merci- fully 'been thinned out a bit. Still, it gets in 1,218 exhibits, more,...

Assuming you care and assuming you can afford the trifling sum of twelve guineas for the latest editionof Debrett, you can find out from the tables of precedence that .a Master...

Tailpiece If I see a Bill before the.House of Commons

backed both by Mr. Stonehouse and by Sir Cyril Osborne I raise one eyebrow. If the same Bill is supported by Mr. Francis Noel-Baker and Mr. Geoffrey Hirst, I raise the other. If...

In the leafy month of June What will prove a likely tune? What the thrilling, roguish.note To bring the last triumphant vote? By October harvest's in, That's a healthier time...

As readers know, Quoodle is not uninterested in most kinds of sport. A home engagement I am looking forward to reading about is next Sun- day's title fight between Rowse and...

Campus Politics I was glad to see that a seminar

on the United Nations and British policy will be held in Leeds University later this month. Under the auspices of the Foreign Office as well as the university, an impressive...

The Police Under Pressure By R. A. CLINE AT the heart of our democratic constitution A lies an enigma. If you regard efficient and expeditious administration as the highest...

A Night Out With the Mods

By RICHARD GOTT D RIVING south towards the roundabout at the opening to the M l. Two figures, elegantly dressed, waiting for a lift. Mods. They clamber in, and we drive on,...

America and the Kennedy Round

From CHARLES A. CERAMI WASH INGTON W E ER the 'Kennedy Round,' opening on May 4, succeeds or not, the preparations for it have created some innovations of lasting...

By RANDOLPH S. CHURCHILL FREEDOM from the press; and now we must add freedom from television. To no one can this vital freedom have seemed more significant than it did to the...

By HENRY FAIRLIE I HAVE thought of putting an announcement in the Personal Column of The Times: 'Henry Fairlie wishes it to be understood that, between now and August 4, he has...

SIR,—Henry Fairlie's comment on the trial of Stephen Ward made

one or two fair points, but was as a whole one of the most tendentious pieces of Tory apologetics I have read in a long while. He argues that the prosecution of Ward and the...

SIR,—Mr. Mursell invites me to justify the statement that our processes of law are 'ramshackle and cry out for reform.' It seems incredible that anyone would need such...

SHL—Your leading article last week suggests drastic measures in the event of a unilateral declaration of independence by Southern Rhodesia—sanctions against their exports, and...

SIL—Miss Emery's letter in last week's issue only rubs salt in my wounds. If 1 had been a don, my equation of 'will' with the sexual organ, and 'spirit' with semen, in...

SIR,—Well, I'm sorry Christopher Booker wasn't feeling well. If he had been, he might have noticed that during the pullover programme, my colleagues in the background were hard...

SIR,—Mr. Edgell claims his version of the paragraph from the

Advertising Standards Association Report is an over-simplification. I call it a plain falsification. To me the clear meaning is: 1. Not all the com- plaints were investigated....

SIR,—Mr. Cooper is puzzled as to how the presence of Liberal candidates in by-elections may have helped the Conservatives. As my letter made clear, the polls which show that...

S1R,—It worries me that Mr. Sparrow does not even mention the most dismaying feature of these terrible punishments. A term of thirty years in prison (forty in the case of Blake)...

OTHERS ABIDE SIR,—John Drinkwater (who, incidentally, has for- gotten him?)

played Henry IV and not Henry VI in the Thirties. (The Falstaff was George Robey.) I would not have mentioned this trivial fact had not your reviewer, Mr. Martin Seymour-Smith,...

SIR,—Mr. Oliver Martin in his review of Max Caul- field's The Easter Rebellion states: 'without doubt this was as unpopular a rising as Ireland had ever known. One of the heroes...

SIR,—The name is, of course, Hroostschoff, phonetically speaking. It is spelt in the Cyrillic alphabet with an 'X' as in Xarkhov, Xemnitz or Xristofer. So everybody's right and...

THE LANGUAGE OF THEOLOGIANS

Sta,—I have been reading theology for almost fifty years and as a result of that experience my 'immedi- ate answer to Sir W. M. James would be, 'They don't.' But perhaps I ,...

attention to 'examples of two kinds of corruption of the language.' The final sentence of the paragraph on 'Absentee Voters,' with the substitu- tion of 'will' for 'shall,'...

SIR,—I have been commissioned to write a book on the sharp practices of doorstep salesmen, mail-order advertisers and the like; and should be most interested to hear from any of...

there have been many untruthful attacks on South Africa, may I reply briefly to what he considers to be a truthful complaint—that the whites 'batten on the misery' of their...

SIR,—The Times leader 'A Few Plain Words' would appear to have been splendidly vindicated in your last issue by the quite pitiable attempt of the nor- mally intelligent and...

PURPOSE IN POLITICS SIR,—Natural disapproval of Mr. Fairlie's polemics would

normally be tempered by the knowledge that journalism would be a very dull' business if every writer built his reputation simply on clarity of ex- pression, precision of thought...

anyone of both sexes' What a' strange Brave New World is in- habited by Mr. Randolph Churchill! I. M. H, TOBIAS 106 Hill Farm Caravans, Whipsnade, Dunstable, Beds

Othello. (National The- atre.) — Macbeth. (Mermaid.) — Juno and the Paycock and The Plough and the Stars. (Aldwych.) MUCH of this Othello is beautiful. It is also disturbing...

I Fidanzati. (The En- gagement.) (Acad- Ermanno Olmi's second feature film goes far beyond the social comment and comedy of his first, 11 Posto, but it has the same reticence,...

The Art of a Decade

By NEVILE WALI. IS THE enormous inter- national exhibition of Paintings and Sculptures of a Decade: 54-64, org- anised by the Calouste Gulbenkian Foundation, which has flowed'...

By CHARLES REID True, there are flaws. The worst of them is the blustering four-bar Prince Hal tune which, for want of any valid answering motif, repeats itself incontinently,...

Is Goodness Gracious ? By DAVID DAICHES TN the course of his long academic career at 'Cambridge Basil Willey has put all students 43 '..f English literature and history in his...

Oodles and Oodles Letters to a Sister. By Rose Macaulay.

Edited by Constance Babington Smith. (Collins, 25s.) WHAT service is rendered the dead, one wonders, by sorting through discarded papers, casual corre- spondence and unfinished...

It settles on the lot of us. My wife, Long sad face gazing into the dark, Steelgrave's huge bald skull Seized in a rigid hand, the art student Asleep, head clewed aside, like...

The End of Empire

By E. A. THOMPSON T book* at once challenges comparison with Rostovtzeff's famous social and eco- nomic histories of the Hellenistic world and of the earlier Roman Empire. But...

The Limits of the Possible

Cozzens. By D. E. S. Maxwell. (Oliver and Boyd, 5s.) ALTHowl' prior to the publication of By Love Possessed in 1957 James Gould Cozzens had en- joyed a respectable although...

UNTIL about ten years ago nobody in Moscow or Peking lost much sleep about African prob- lems. There was a handful of linguists and anthropologists in Russia who published their...

ISM A POPULAR fictional character is the rags - V riches millionaire who comes to regret his weal ° and its corrupting influence on his family. Dav id Howarth's new book has...

By CLANCY SIGAL CNN a recent trip to America I stayed too long kfin New York. The hold of the city was enough to impede me; but not enough to inspire. I saw sufficient of the...

The White Fathers is Julian Mitchell ' s fourth book, and one can see him settling comfortably into the adroit manoeuvres of 'contemporary ' fic- tion. This work deals with a...

The Shell and BP Guide to Britain. Edited by (Phoenix, 21s.) Wax the best months of the year ahead of ' 15 and weekends and holidays to plan, this attrsc' tively produced...

A Tide of Picture Books

'To be Dead is Best'

It was a lovely stew. Great chunks of meat, As soft as cushions, beaded with golden fluid, Smelling of thyme and pepper. No one at home Ever made me a stew like that, I said to...

By NICHOLAS DAVENPORT. THE professional investors in the City are frowning on the ebullience of the equity share markets. They think that the rise since July, 1962, when this...

By CUSTOS T HE market thoroughly approved of ths . divorce between ICI and COURTAULDS whim had been an unhappy marriage or rather liaise° , ICI is handing over its 374 per cent...

By LOTHBURY O VERALL crude and product sales of British Petroleum during 1963 improved by 7.7 I 3 er cent and with operating costs up by only 5 7 per cent, the group net income...

By ALAN BRIEN AFTER many years in the generalisation business, I find myself left with only one that I can trust—all generalisations are inac- curate. The prime task of...