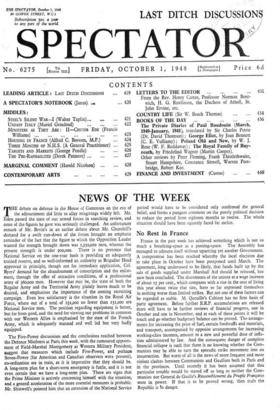 No Rest in France

France in the past week has achieved something which is not so much a breathing-space as a panting-space. They Assembly has managed to adjourn itself without upsetting yet...

T HE debate on defence in the House of Commons on the eve of the adjournment did little to allay misgivings widely felt. Mr. Eden passed the state of our armed forces in...

Mr. Menzies had some thoroughly apt and sensible comments to make on western union and federation when he spoke at an Empire rally on Tuesday. The extreme partisans of...

Nobody would suggest that there was anything innately improbable about a plot to assassinate a South American dictator, but the dis- covery of one in Argentina has come at such...

The tempo and scope of Communist mischief-making in Indonesia are increasing. An insurrection in East Java, based on the important town of Madiun, has broken out and is making...

From Ottawa to Washington

There were a certain number of questions concerning trading relationships between the United Kingdom, Canada and the world which could not be settled during Sir Stafford...

The first report of the Girdwood Committee on the cost of house- building, published on Thursday, is of considerable general interest. It is, on the whole, a gloomy document....

W HERE, after all the speeches and Notes of what may prove an historic week, do we in fact stand ? There has been the identical Note from each of the Western Foreign Ministers...

I shall- be surprised if Barbara Ward's new book, The

West at Bay, which is published this week, does not take a high place in the literature of international affairs, for there are few men, and I think it can safely be said no...

The fish-fryers are up in arms over controls—not, be it

noted, over the imposition of controls, but over their threatened removal. Hitherto licences for the opening of fish-and-chips shops have been required, resulting in a...

" Once again we face a state of peril and

dread. . . . Do not blame humanity for this. And do not blame God ; and do not lay exclu- sively the blame at any special door. The cause is clear. It is atheism ; the general...

The African Conference sitting at Lancaster House this week is

a singularly interesting event. Nothing df the kind has ever taken place before. Last year there was a conference of African Governors, and no one questioned the value of that....

It is, I take it, the function of the Liberal

Party to keep nicely poised between the Conservatives on the one hand and Labour on the other. On occasion they achieve the nicety a merveil. Take the Parliament Bill, for...

It is good sometimes for proud spirits to be broken,

and The Spectator, no doubt, is apt to get above itself now and then. But chastening may come from unsuspected quarters. A department of this journal being in process of...

a reception given in his honour on Tuesday, is a remarkable figure. Little known so far outside India, he is one of the richest men in the country, owning a chain of cement...

By WALTER TAPLIN A FORTNIGHT ago a London publisher of Left-wing sym- pathies issued an advertisement in which he complained that orders for a book on the case for steel...

By MURIEL GRINDROD S INCE the general strike which followed the attempt on Signor Togliatti in mid-July, a deceptive calm seems to have settled on the Italian scene. Political...

II.-CHUTER EDE By FRANCIS WILLIAMS Mr. Francis Williams contributes today the second of his character sketches of certain Ministers. The view he takes in each case is, of...

By ALFRED C. BOSSOM, M.P. T HE destruction which France has suffered through repeated wars might have been expected to dull her people's traditional delight in good building....

By A GENERAL PRACTITIONER T HE new National Health Service has now been functioning for three months—long enough to indicate whether or not it is going to work, if not long...

By DEREK PATMORE I T is fortunate that the centenary of the founding of the Pre- Raphaelite Brotherhood should fall at the present time, for we are in a mood to appreciate the...

By HAROLD NICOLSON I WAS invited last week to attend, and to take part in, a debate organised by a group of serving officers. These ardent soldiers, whose ages range between...

A POLISH programme played by the Philharmonia Orchestra and conducted by Gregor Fitelberg at the Central Hall has been the only unusual musical event in a very conventional...

THE THEATRE International Variety. (London Casino.) WEARING with resigned embarrassment a red cap and blazer and looking for all the world like a tiny, sad, rather intelligent...

AMONGST the many exhibitions that mark the end of the silly season pride of place must go to the Picasso lithographs at the Arts Council's gallery in St. James's Square....

SIR,—In complaining of the failure of students of the Stone Age to realise that there might have been an earlier Wood, or Palaeoxylic, Age, Sir John Graham Kerr does not...

THE CASE OF DR. DERING

SIR,—I agree with Mr. Nicolson's view, expressed in his interesting article in The Spectator of September 17th, that the Home Secretary deserves great credit for taking an...

Stn,--I should like to add a word in support of

the Rev. Henry Carter's plea in The Spectator of September 17th for international responsibility for the whole refugee problem. When I was recently in Austria, I learnt of the...

SIR, —The Spectator writes with less than its usual fairness and objectivity on the question of Hyderabad. The Nizam was indeed given the title of "Our Faithful Ally," but...

EUROPE'S REFUGEES Ste,—Is there any real issue between Mr. Polanski and myself regarding Displaced Persons who remain in camps in Germany? I think not. I am as eager as he that...

Sm,—During my recent visit to Bulgaria and Czechoslovakia I took the opportunity to visit some of the Greek children who are being sheltered and cared for away from the horror...

YEATS AND THE OTHERS SIR, —Miss Kate O'Brien, in her breathless

account of Yeats's burial under Ben Bulben, makes two statements which call, I think, for question. In the italicised introduction to her article, for which, perhaps, she is not...

A LLOYD. GEORGE MEMORIAL SIR,—May I add the following to

the statements that appeared in a recent issue of The Spectator? The query of the suitability of memori4ls to Prime Ministers is beside the point. This appeal is for a worthy...

COMPENSATION DELAYS wonder whether this is a subject which may

interest you and your readers ? An old lady, now 84, was a preference shareholder in a family concern by which she secured a small but sufficient income. In 1941 the factory in...

A number of cuttings- from the correspondence to local papers has reached me, all protesting with sentimental fervour against the destruc- tion of hedges. War against hedges...

A great gardener plants his lilies among his heaths in order to shade the base and allow the flower the sunlight. I duly copied ; but the heaths grew too tall ; and in removing...

There has been a scare—in Europe as in North America—that wild fowl, meaning duck and geese, were seriously diminishing. New laVys and, to some slight extent, a new interest,...

HOW TO TREAT FRANCO SIR, It is with the greatest

satisfaction that I have read in The Spectator of September 24th an article I have hoped to find week by week for the last three years: How to Treat Franco. " The present absurd...

MR. BEVAN AND HIS CRITICS SIR,—I have read with much

interest, tempered by more than a little scepticism, the character study of Mr. Bevan in The Spectator of Septem- ber 24th. One gets somewhat fatigued with a verbal tour de...

AT a meeting of a local council, when a housing estate was under discussion, one member urged that trees should be planted. The first comment was that they must be "ornamental...

JUST TO REMIND readers overseas that copies of THE SPECTATOR are available for Christmas and New Year Gifts AND to invite them to take out subscriptions for their friends....

THE HUNT AND THE TRAP SIR,—I would point out to

Sir W. Beach Thomas that when in 1931 a Bill was introduced to make steel traps illegal it was defeated largely by the efforts of the British Field Sports Society. If poison and...

me. I am intermittently pestered by my neighbour's fowls extending their Lebensraum. I was assured by the local constabulary that it was my, and not the owner's, responsibility...

The Dilemma of Vichy PAUL BAUDOUIN, a director of the Bank of Indo-China and a well- known financial expert, was made an Under-Secretary of State and Secretary of the War...

George Eliot. By Joan Bennett. (Cambridge University Press. 10s. 6d.) THIS admirable examination of the mind, the work and the life of George Eliot is divided in two parts. The...

Ego 9. By James Agate. (Harrap. 18s.) AT one point in this, the last instalment of what his publishers call Mr. Agate's autobiography, the diarist refers to Ego as a work of art...

The Wagners and Hitler

THE very wealth of scholarship on Lincoln and the Civil War justifies the publication of Professor Wheare's able book. The views of modern American scholars on the causes of the...

The Case of Mr. Crump. By Ludwig Lewisohn. (The Bodley Head. 10s. 6d.) How very much worse, one sometimes comforts oneself as the competent dull sentences slow-march across a...

London Echoing. By James Bone, with Pictures by Muirhead Bone. (Cape. 18s.) THERE were, and are, three brethren Bone. One took to the sea and is now Sir David ; one took to...

SOLUTION TO CROSSWORD No. 495

[A Book Token for one guinea will be awarded to the sender of the first correct solution of this week's crossword to be opened after noon on Tuesday week October 12th. Envelopes...

By CUSTOS THERE have been several instances in recent months of company profits falling lamentably short of prospectus estimates, but in no case has the discrepancy been more...