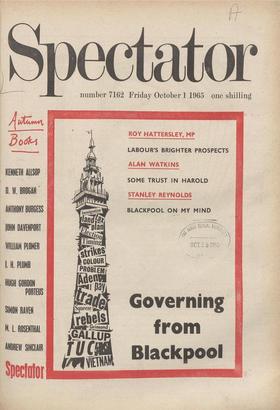 JUST LIKE THE OLD DAYS: the Government declared direct rule in Aden and the aircraft - carrier Eagle moved down the Suez Canal to be in attendance. Mr. George Thomson, Minister...

PVHE Prime Minister was rough on the I Liberals on Tuesday. This was plainly not because he spurns their assistance. He is in , no position to do so. But Mr. Grimond at...

Now for Reform From SARAH GAINHAM BONN T HE cries of triumph and disaster have died down into the jumble of voices resolving_ diverse demands into a government coalition;...

Towards a New Foreign Policy KEITH KYLE • Also Charles Reid's report on the 'Spectator's' inquiry into opinion among Promenade Concert audiences. One year's subscription to...

Mirror Images By CHRISTOPHER BOOKER M R. CECIL HARMSWORTH KING, SiXty-four, and Mr. Hugh Cudlipp, fifty-two, are, as everyone knows, the most important figures in the largest...

The Chinese government presents Its most distinguished compliments And begs the honour to insist That you're an ex-colonialist. With deep regard we stigmatise Your well-bred...

Some Trust in Harold By ALAN WATKINS 'g R. REGINALD MCKENNA,' said Bernard Shaw on one occasion, 'apparently be- lieves himself to be the Tsar of Russia—a very common form of...

The Prospect Grows Brighter . By ROY HATTERSLEY, MP F OR the Labour party the outlook has not been brighter since before the general elec- tion. The pound seems safe at last...

A PLACE IN MY MIND

Honky-tonk and Black Poetics By STANLEY REYNOLDS L GENDS by definition are larger than life. This makes it always surprising to find that, say, Mae West, that Empire State...

Conference Town Blackpool, so I hear, is not the most

popular of conference resorts, either with journalists or with politicians. For one thing, the train service is at best dilatory; then there is the impossi- bility of getting...

Conductorless Opera Sitting down before Nigerian opera as sampled at

the Commonwealth Arts Festival, white legisseurs sighed admiringly. Here was something Europe simply cannot do. The sample was Oba- Koso ('The King Does Not Hang'). In this...

Wingless Words This season of mists is also, aptly, the

season of oratory: and even partial exposure to the political conferences so far reminds one of the mediocrity of most public speaking today. Per- haps, since more and more...

Wilson has been complaining to fhe BBC about the television treatment of the ,abour , conference. He objected, apparently, to r. Clive Jenkins, the left-wing trade union te....

Domestic Strife I haVe only just discovered the extent (and

I T is hard to take the new British strong-arm methods in Aden very seriously. I prefer to see them as a prelude to Britain accelerating her departure. It is. after all, very...

Sin, 1 am sorry that Mr. Hogg, who is a friend of Lord Butler's and myself, finds that like Lord Butler I am a source of embarrassment to my friends. I have never been...

The War in the Commonwealth

SIR,—Mr. A. Yasamee views India with such a 'distempered appetite,' that his letter (Spectator, September 17) makes little sense, if any. To begin with, that absurd statement he...

Sell up the London Jails

By GEORGE HUTCHINSON TN tackling London's new housing programme, IMr. Richard Crossman, thoroughgoing as ever, has undoubtedly contemplated all sorts of ways in which he might...

SIR,—Mr. Desmond Donnelly is the perpetual 'Charley's Aunt' of British politics. On what possible basis is his assertion made that they are moving 'in favour of a progressive...

fail to sec how D. C. Watt can say Hitler

is as much a part of Europe's intellectual history as, say, Marx. Some of Marx's writings may have a strong emotional appeal but surely have deep in- tellectual foundations,...

SIR, —Ni g el Fisher's article on Mauritius (Spectator, September 17) was quite fair and in line with what he publicly stated in Mauritius a few weeks ago. But he is inaccurate...

SIR,—It would appear that Alan Watkins, having heard Mr. Grimond's first speech at the Liberal Assembly, paid no attention to the electoral reform resolution that followed. If...

SIR,—lt was never my intention to get involved in a sex war, neither do I subscribe to the trite phrase quoted by Claire Rayner—If-women-ran-the-world-...

SIR,—Mr. Knox Cunningham in his letter (Septem- ber 17) about the pigeons losing their safe seats at Westminster shows unnecessary concern that King Hal's living 'crown' has...

SIR,—The Government's recently published National Plan contains an interesting analysis of Britain's economic structure. But as there is no provision for either carrots or...

SIR,—Miss Holland will need no help from any or us in defending her friends among the motel aristocracy from Mr. Gray. if the notion of he' championing their virtues is slightly...

SIR,—I must protest against Dr. A. L. Rowse's absurd protest

(September 17) against your editorial blaming Britain for the imbroglio in the Indian sub-continent. Dr. Rowse places the onus of blame on Pandit Nehru. But is it not natural...

SIR,—Why is Mrs. Knapp so sure 'that grand ex- ponent

of the English language, Sir Winston Chur- chill, would have flinched at the use of the word "frivial" '? Has she forgotten his own wartime in- vention of the word 'triphibian,'...

Sut,—Once upon a time, as all good stories should begin, however incredible, a man parked his car in a lay-by and started to read the Spectator. On the back window was a label,...

Stn,—It is quite true, as Mr. Hattersley says (Sep- tember 3), that in my original letter I did not answer his 'crucial question' as to whether integration is possible without...

No Substitute D RAMA 'is no doubt a sore point at Broad-' casting House. After all, it must cost a good deal, considerable resources of equipment and manpower must be deployed,...

Drums Over Elsinore T HEY have come in all sizes and shapes and at every sort of level, the Commonwealth films, and at all hours of- the day and night, from Donald Campbell...

Ring Well Sung T HE first half of Der Ring, with twenty-five parts sung by the Covent Garden resident company, leaving only three for foreign im- portees, would have been a...

Mr. Standfast By SIMON RAVEN 9 TIKE world,' proclaimed Lord Birkenhead in I 1923, 'continues to offer glittering prizes to those who have stout hearts and sharp swords.' This...

IN one place or another, more than 2,000 of Southey's letters have appeared in print since his death in 1843, some in garbled form. From a large number still in manuscript,...

The Winning of the West. By Theodore Roose- velt. (Premier Books, 6s.) Outlaws on Horseback. By Harry Sinclair Drago. (John Long, 35s.) 'BULLY' was one of Theodore Roosevelt's...

Thu engaging achievement of this you-are-there documentary is almost to convince the reader that no one was there. No paltry feat, for quite a lot of people were in Paris on...

B y ANTHONY BURGESS As a sixtieth birthday present, Arthur Koestler's works are being brought out in a uniform collection, very well printed and bound, though rather expensive,...

What's New? By M. L. ROSENTHAL 1TERATURE, said Pound, is `news that stays news,' But most news about literature is of the more transient kind, gossipy or political or both....

At flashpoint leaves fall, Light, air, shell, in after-seasons; Where I lived the British well-being of children out of sight, Towns, mining valleys, a child bouncing on...

Winter is coming soon. I know because It always does. Hush. You can feel the chill wind blow, Carrying snow, Carrying dark. The branches lean And let their leaves down. I Look...

Primary Sources I in the quiet and oak Cores of the house stripping by (To rest my eyes' over-reading) The mellow of a candle. My bed Expectant, comprehending. I glimpse From...

NEW PAPERBACKS : The Spy Who Came in from the

The Admiral as Historian

By D. W. BROGAN I HAD better begin by 'declaring my interest,' as they say in the House of Commons. I was one of the first pupils inflicted on the first Harmsworth Professor of...

in Creative Translation. By J. P. Sullivan. (Faber, 35s.) EzRA POUND'S nontage to Sextus Propertius is handsome enough as an act of homage. As a poem in its own right it has...

The Invisible Government. By David Wise and Thomas B. Ross. (Cape, 30s.) MODERN states, especially large and aggressive ones, are increasingly influenced by the opera- tion of...

SAUL BELLOW is Number One now. In a recent interview a well-known American novelist quoted him as saying. 'There are those who didn't like Herzog. but since the big critics...

The Fabulous American Boom By NICHOLAS DAVENPORT S A V1NG the £ has probably meant saving us all from a slump in world trade. Devaluation of the t , would have been...

• By CUSTOS HEN the recovery in the gilt-edged market 'W VV had pushed the price of War Loan up to 57 and the yield down to 6/ per cent, it was everybody's guess that the...

By LOTHBURY HE results from Louis Newmark, the watch 1 importers and electronic group, for the year ended March 27, 1965, are most encouraging. Pre-tax profits are up from...

By LESLIE ADRIAN MOTORING Madness takes on as many shapes as Proteus at the top of his Virgilian form. It encom- passes the whole human range, from Bank Holiday tragedy, for the...

Another Part of the Forest By STRIX `Lucy,' I said when I came in for luncheon, 'have we got a thermometer in the house?' 'Yes,' said my daughter. 'It's hanging up on the wall...

Greenwich Morning By DAVID ROGERS "'THURSDAY. Early morning. Still dark, but the I park gates are already open. Shadows on the wet grass. We slip quickly past Wolfe's house,...

By ALAN BRIEN I HAVE often boasted that I could sleep through any- thing, if necessary.. It was necessary this Tuesday morning in my favourite city of Dublin and I think I have...