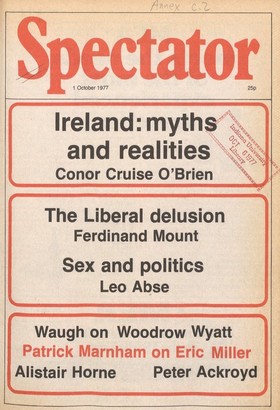 Facing North from the South

Our dumb friends Ferdinand Mount Brighton At 7.30 a.m. there were only two men on Brighton beach. One wore earphones and a rubber suit and walked slowly along the *foreshore,...

Americans, who generally think of language as some arcane disease of the throat, are now rediscovering the abstract noun. Instead of swallowing medicine, they receive...

Suffer the little children Auberon Waugh The most remarkable — some may find it encouraging — aspect of recent queerbashing outbreaks in Swansea University College and Red...

Richard West Johannesburg The captain of the Northern Transvaal, Thys Lourens, waxed biblical over his rugby team's victory last Saturday over the Orange Free State: 'I want to...

Nicholas von Hoffman Washington Like a summer romance, the Bert Lance affair lasted too long. After three extensively televised days of testimony before a Senate Committee,...

An emperor for Ethiopia?

Brian Dixon Colonel Mengistu Haile Mariam's record is unsurpassed in the recent, annals of black Africa. Directly or indirectly, he has been responsible for the deaths of three...

Conor Cruise O'Brien It is, on the face of it, odd that the question of Northern Ireland could have been treated as a non-issue in the recent Irish general elections. All...

Leo Abse Almost all Labour candidates for the coming election have now been chosen: but, despite the efforts of Transport House, the selection committees have in the...

LADY CLARKE OF TILLYPRONIE'S COOKERY BOOK; almost anything by or about John Oliver Hobbes. Recording of Constant Lambert s ballet suite The Prospect Before Us, Write Spectator...

Patrick M arn ham In his novel, The Way We Live Now, Trollope presented one of his finest characters, Augustus Melmotte, the Jewish financier who had been hounded out of Vienna...

Logie Bruce Lockhart Great debates bring casualties. Every time that someone suggests education should be more practical, or more geared to the needs of industry or 'national...

Madness in the air Nicholas Davenport I have a theory that as the world gets madder the price of gold goes up. Did not the hot air being breathed at the IMF meeting cause gold...

Sir: There are undoubtedly Conservatives who relish the thought of, in the words of your editorial of 17 September, 'cutting the unions down to size.' They see trade unions as...

Sir: It would be a tragic mistake, I feel, if

the Conservative Party were to accept the fallacious and almost cowardly attitude towards the closed shop proposed in your editorial of 17 September. Those Conservatives who...

Sir: Rhodes Boyson does really try hard to please, but 'could do better'. In his article Educational jollies (24 September) he says: 'A system to be successful must work with...

Sir: Taki Theodoracopulos tries to serve his misrepresentations with a sour sauce of humour (17 September). Indeed I deny the existence of Epikouriki. As I wrote in the...

Sir: Is it not curious that your medical and scientific readers have provided no informed comments of any kind upon the important letters from Mr Carr and Ms Dalin extolling the...

Sir: 'The Bantams' were a special force recruited by the British Army in the First World War. It was composed of soldiers below average height. I am a professional writer...

No champagne for Woodrow Auberon Waugh What's Left of the Labour Party? Woodrow Wyatt (Sidgwick and Jackson £4.95) The wrapper of Mr Wyatt's new book, which might more...

Alistair Home Audacity to Believe Sheila Cassidy (Collins £4.50) If there is one thing I learned in four grim years of study on the Algerian War, it is that physical torture is...

Alastair Forbes Prophesying Peace James Lees-Milne (Chan° and Windus £6.50) 'This diary', wrote Mr Lees-Milne in the entry, dated 1 October 1945, on the last of the twelve...

Elisabeth Whipp Hospital Polly Toynbee (Hutchinson £4.95) Everybody loves a hospital. It's a giggle, a touch of drama and a good cry. Soap operas mop up every possible angle of...

Sebastian Faulks Lorenzino Arvin Upton (Bodley Head 23.50) On the wall of the gents in my local pub someone has written 'Time leaves its iron grimace', and underneath another...

Benny Green Debussy on Music ed. Richard Langham Smith (Secker and Warburg £6.90) The way of a musician is hard indeed, and he has to take his compensations where he can find...

One-woman Clancy Sigal The Story of Adele H (Odeon Haymarket) Exorcist II: The Heretic (General release) Even in these liberated times many women find it hard, even...

Lost worlds Ted Whitehead Saki (Apollo) The Plough and the Stars (Olivier) 'Not that I ever indulge in despair about the Future; there always have been men who have gone...

John McEwen British Painting 1952-1977 (Royal Academy) The jubilee bonanza of British painting (Royal Academy till 20 November) has been chosen by a large committee and it...

Fact and fiction about Callas Robert Skidelsky Most of the obituary notices of Maria Callas, while fulsome, were neither particularly accurate nor perceptive; in her death, as...

Mysteries Richard Ingrams Television, which broadcasts from sittingroom to sitting-room, often gives the illusion of intimate...revelations when it is at its most...

Jeffrey Bernard I was talking to a Maltese ponce in the Helvetia in Old Compton Street the other day and it occurred to me to ask myself what the hell was I doing? That's not...