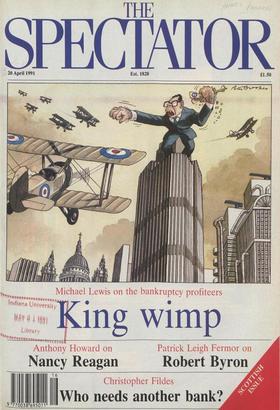 M r John Major decided to dump the Thatcherite principle that everyone should contribute to the cost of local services. Ministers hoped this would stop sugges- tions that the...

Mr Major comes under a withering hail of friendly fire NOEL MALCOLM A man from the Sun asked rather a good question about how Labour could accuse the Government of changing...

A.N.WILSON A , the Evening Standard Literary Luncheon last Thursday, Martin Gilbert, the biographer of Sir Winston Churchill made a remarkably eloquent speech about his hero....

The beauty, mystery and rightness of wild animals in captivity CHARLES MOORE D r Jo Gipps, who is the curator of mammals at London Zoo, wrote to the Independent on Monday to...

REVENGE OF THE WIMPS

triumphant victors in the middle-class war — the accountants NOT long ago I was sitting in a business library in the heart of the City of London when an old voice came...

Charles Glass finds that Iran is the Kurds' greatest benefactor Teheran MOST of the Kurds fleeing from Iraq are not at liberty to decide whether to remain at home or to...

Stephen Handelman meets survivors of foreign settlers in the Soviet Union of Stalin Karaganda WHEN Heimo Rautianen gropes for an English word, his mind races across half a...

THE TRIBES THAT DEAL IN DEATH

Andrew Kenny finds an enduring indifference to the killing in South Africa Natal JUST down the road from where I live is a small photographic shop run by a mass murderer. The...

A reader received the following letter from a firm of solicitors: Dear Madam, We have been instructed by your neigh- bour in relation to serious allegations of harassment of our...

Anthony Daniels visits a Prince among his men Monrovia AT THE side of the road, near the turning to Field Marshal Brigadier-General Prince Johnson's encampment in the Monrovia...

SPEAKS SCOTLAND WHERE IT SPOKE?

the press, past and present, north of the Border YOU could argue the case that, per head of population, Scotland has produced more first-class journalists than any other nation...

persist... IF ANYONE retains his faith in the benevolence or wisdom of bureaucracies, I should like to take him to the Orchard Farm housing estate, where so many of my patients...

HIS search for a suitably grand head office started off with Grand Buildings, in Trafal- gar Square. There he tried and failed to gazump Enterprise Oil. He resisted the...

NATIONAL misunderstandings are at work. M. Attali might reasonably regard himself as the epitome of the French intellectual. Just as reasonably, to Anglo- Saxon minds he seems...

THESE international agencies, as I warned when the Berd came to London, divide into fattipuffs and thinnifers. The International Monetary Fund, though sometimes greedy, is a...

Knock, knock! Who's there? Attali. Attali who? Attali and completely over the top CHRISTOPHER FILDES A SK Jacques Attali to lunch, and he will send his security man before...

Flight or fright Sir: I am angered by the accusations of cowardice being directed at North Amer- icans by the British press in general, and that notorious xenophobe Auberon...

Sir: On 23 March The Spectator published an article (`The apotheosis of Pilgerism') by a former British ambassador, Derek Tonkin, about our documentary film `Cambodia: The...

Sir: Surely a journal of your reputation should not print deliberately misleading information. I am sure that I was not the only reader promoted to dial the number for 'Luke...

Sir: It was with particular sadness that I learnt — through Jeffrey Bernard's Low • life column (16 March). — that Renate Sunkler, who was writing a thesis about him, had died....

Sir: I am late in seeing Mr Buchan's article (Well educated heads in the sand', 30 March). He misquotes me, not grossly but enough to change the tone of what I said and enough...

Sir: Having been a close friend of Claudie and Perry Worsthorne for over 40 years I was amazed to read in illiterate Alastair Forbes's Diary (30 March) that he visited Claudie...

Sir: I know nothing of the professional relationship between editor

and guest Di- arist but assume that it would lie in the power of the former to excise from con- tributions of the latter, items as gratuitous- ly offensive, spiteful and...

The road to Stornoway Patrick Leigh Fermor LETTERS HOME edited by Lucy Butler John Murray, f17.99, pp.407 I t was only in his twenties that Robert Byron thought much about...

Everyone called him the trashti, a name conceived somewhere between our languages. Speechless, perhaps an outcast, he would come at lucky intervals of seven days, pushing his...

My art's in the Highlands

Head to come off?

Charles Maclean INSIDE THE FIRM by Tony Lambrianou Smith Gryphon, £14.99, pp. 224 I nterested in hearing what really hap- pened that night? The long-knives night of 28 October...

Hugo Vickers DAVID TENNANT AND THE GARGOYLE YEARS by Michael Luke Weidenfeld & Nicolson, £20, pp.212 T he Gargoyle Club was created in the mid-Twenties, enjoyed its zenith...

Laying down the White's man's burden

No first degree for the first lady

Anthony Howard NANCY REAGAN: THE UNAUTHORISED BIOGRAPHY by Kitty Kelley Bantam Press, £16.99, pp.532 I t has never been much fun being First Lady. Eleanor Roosevelt was...

The two of us there, talking animatedly. He, trying to buy a way into our company? The pub bore perhaps? Grey haired, a flushed ravaged Complexion. Coat well cut; seen better...

Boswell in the dog-house William Cash APRIL 1791 was one of the blackest months in James Boswell's life. He was still brooding over the death of his wife, his scheme to get Dr...

Literary lacuna The novel that never was Rory Knight Bruce T here is a scene in James Hogg's 19th-century religious nightmare, Confes- sions of a Justified Sinner, when the...

Low tide for seamen Allan Massie ANEURIN Bevan once described Britain as 'an island of coal surrounded by fish'. Now the coal industry contracts and the fish are running out....

The Royal Ballet (Covent Garden) High tension Deirdre McMahon A gon, created in 1957 for the New York City Ballet, was the apogee of the cel- ebrated Stravinsky-Balanchine...

Feel the length Peter Phillips T he premiere of Francis Pott's Organ Symphony last week was quite an occasion. Westminster Cathedral was almost full, which in itself was...

Black on black Gabriele Annan A few weeks ago Christopher Hitchens published a fierce and funny piece warning everyone off The Bonfire of the Vanities on the grounds that it...

Well-scrubbed pots and pans Ursula Buchan I f a gap exists between the professional and the amateur gardener, there is a posi- tive mountain chasm dividing the average...

In defence of Nancy Taki New York My little boy, John-Taki, is dyslexic and goes to a special school. He makes up for his inability to read by using his imagi- nation not...

Read all about it Ian Hislop I f anyone says anything interesting in a television programme nowadays you tend to read about it before the programme goes out. On Panorama (BBC...

Marlyn Harris is away.

Bear effrontery Zenga Longmore L ast week, Omalara and I went for a stroll around that most unappreciated of public gardens, the lawns surrounding the Angel Town estate. Birds...

THERE are two sorts of countries; those where you can eat and drink well easily and those where it is only possible with Oomph. France, the old France, used to be so easy. In...

COMPETITION co y As RE GA z 12 YEAR OLD SCOTCH WHISKY Narrative train Tom Castro I n Competition No. 1672 you were asked for a sonnet beginning, ' Opposite me . . .', and...

In Kipling's opinion 'our England is a garden'. A poem on this subject, suited to our own day, please. Maximum 16 lines. Entries to 'Competition No. 1675' by 3 May.

Division of labour Frank Keating IN SPITE of West Ham United's progress to the Cup final being cruelly sawn off by an inept moment of knee-jerk refereeing, a mundane soccer...