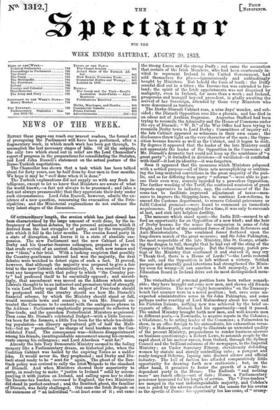 Of extraordinary length, the session which, has just closed has

been characterized by the large amount of work done, by the in- frequency of bootless debates, by the personal animation which it derived from the last struggles of party, and...

BEFORE these pages can reach our nearest readers, the formal act of proroguing the Parliament will have been performed, after a fragmentary week, in which much work has been got...

Parliament leaves the state of foreign affairs distinguished by nothing

that calls for lengthened remark; nothing that can vie in interest with the one main subject of Turkey. The Emperor of France has celebrated the Napoleonic fete of the 15th...

The tents at Chobham are this day struck, if fine weather has pre- vailed and they are dry. The Common will be bare again, and all the gallant fellows who have made a brief...

Tun records of the doings of our Queen are mostly naval. On Friday week, accompanied by Prince Albert and the Prince of Prussia, her Ma- jesty visited the frigate Gcflon. On...

The Convocation of the Clergy was prorogued in February last to the 18th of August. On Thursday, accordingly, nineteen members of the Lower House met in the Jerusalem Chamber,...

At the election for South Staffordshire, on Monday . , the Honourable E. R. Littleton was returned without opposition. He "entirely ap- proves" of the present Government. Mr....

Notice of the appointment of Dr. Higgin, Bishop of Limerick, Mr. John Hatchell, and Mr. Montifort Longfield, to be Commissioners of National Education in Ireland, appeared in...

FRANCE.—The fête-day of "Saint Napoleon," the 15th August, has been kept in Paris this year with magnificence unequalled. The Empe- ror, it is said, dictated the programme to...

SATURDAY. The prorogation of Parliament, by Commission, took place today : the Lords met for the purpose at two o'clock, the Commons half an hour earlier. Time and space...

The Queen has signified through Mr. Osborne, Secretary to the Admi- ralty, her Majesty's approbation of the exemplary conduct of the officers and crews in the late review. These...

The departure of the Emperor and Empress of the French

for Dieppe did not take place on Wednesday, for some unexplained reason. The preparations were complete, the railway-train ordered, when all was sud- denly countermanded. The...

The House of Lords, sitting on appeals, gave judgment yesterday,

in the case of "Egerton versus Brownlow and others." Our readers will remember that the seventh Earl of Bridgewater devised his estates to certain persons in succession and...

STOCK EXCHANGE. FRIDAY ANTEXX 00N. The symptoms of weakness which the English Funds presented at the close of last week prevailed to a greater extent at the commencement of the...

It is not probable that the extremely distressing case which

came be- fore the County Court lass Thursday will stop with that day's examina- tion. The following letter from Mrs. Norton appears in the journals of this morning. Several...

The Italian Opera at Covent Garden closes this evening, after a season unusually quiet and uneventful. What may have been its result with reference to the lessee's pocket we...

The Administration of the Earl of Derby, with Mr. Disraeli

Chancellor of the Exchequer, replaced Lord John Russell's Administration in Febru- ary 1852. It professed Protectionist principles, but promised to be guided by the opinion of...

It is generally understood, though it has not been formally

announced, that Grisi and Mario are on the eve of retirement, and will not reappear on our opera stage. They took leave of the publio for the season on Mon- day last, and...

The Lyceum has been opened this week for performances of

what is by courtesy called "English opera," got up by Mr. Allcroft. Auber's Fra Diavolo, with the help of Mr. and Mrs. Sims Reeves and Mr. Weiss, a very fair orchestra, and a...

THE CLOSED SESSION. PLEASANT must be the change for our Senators from Dr. .2Eolus Reid's capricious supply of best London atmosphere, with its odours stolen not from banks of...

ACTUAL STATE OF THE TUREJSH AFFAIR.

MINISTRILIAL explanations on the position of "the Turkish affair," before the close of the session, have been demanded, and rendered : but it cannot be said that they fully and...

Mn. COBDEN'S theory regarding the progress of trade in Turkey has the merit of originality ; which is no small matter in an age of dulness. Taking the natural and obvious view...

PROBABLY the statement of the Peterborough case will -suffice to cure the abuse that it exposes ; and it will not be the less effectual in this particular instance because the...

PEOPICEIIC visions of an altered state of society are very common. A book, if we remember rightly, has been written on the state of London in the year 2000. A distinguished...

A curious correspondence has been published between Mr. C. H.

Frewen and Sir John Shelley, both Members of the House of Commons. It arose out of an unusual proceeding of the latter in a debate on the Turnpike Acts Continuance Bill. The...

THE GREEK AND THE TURK.. A VOLUME under this title, from the well-practised pen of Mr. Eyre Evans Crowe, is the result of a brief visit to Constanti- nople, Greece, the Ionian...

A BErrEn book should have been produced by- an old sailor and an old colonist, whb, besides roughing it at the New South Wales Diggings as an adventurer, visited the gold-fields...

ALICE MONTROSE. * TEE design of this American novel is to

offer a sort of counterpoise to Uncle Tom's Cabin in a friendly way, by developing the ex- cellences of the South as well as the merits of the North. Either the fair writer is...

On the 18th June, at St. Paul's College, Victoria, Hongkong,

Boosts. The close of the season is indicated by the lessening number of publica- tions, as well as by their diminished importance. Captain Nolan's "Ca- valry," however,...