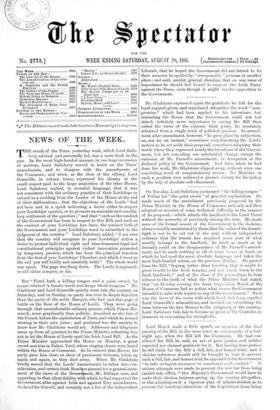 On Tuesday, Lord Salisbury exchanged "the killing tongue "- of

Friday for "the quiet sword" of graceful capitulation. He made much of the amendment previously proposed by the Prime Minister in the House of Commons, and only not then adopted...

But " Pistol hath a killing tongue and a quiet

sword, by means whereof 'a breaks words and keeps whole weapons." Mr. Gladstone and. Lord Granville quietly went into the country on Saturday, and on Sunday no party was ever in...

T HE revolt of the Peers yesterday week, which Lord Salis- bury advised and personally led, was a mere flash in the pan. In the most high-handed manner, in one long succession...

Lord Monck made a little speech, on occasion of the

finizd: passing of the Bill, in the same sense as our remarks of a fort- night ago, when the Bill left the Commons. He had con- sidered the Bill, he said, an act of pure...

Mr. Gladstone expressed again the gratitude he felt for the

loyal support given, and repudiated altogether the word "com- promise," which had been applied to his intentions, but reminding the House that the Government could not but...

Mr. Parnell raised the question as to the character of

Mr. Forster's administration of the Coercion Acts on Wednesday, in a speech which certainly proved that a good many of the sus- pects are not exactly those "dissolute village...

Mr. Forster's speech on Thursday night was a very impressive

one. Nothing could be more conclusive than his proof that those who had been imprisoned for inciting others to violence, had really used language of the most illegal and...

M. Ritchie's motion in the House of Commons yesterday week,

in favour of the policy of manufacturing a fiscal whip of small cords with which to scourge foreign Governments into Free- trade, did not come to much good. Mr. Ritchie proposed...

The Austrian Pester Lloyd openly advocates the annexation of Herzegovina

and Bosnia, asserting, truly enough, that the ostentatious pretence of occupation deceives no one :—" Pacifi- cation, that is to say, the satisfaction 'of the people with the...

Lord Granville announced on Thursday that the negotiations with France

for a new Commercial Treaty have been for the present broken off, owing to the refusal of the French Govern- ment to prolong the existing Treaty of Commerce for three months...

M. Gambetta is losing ground in Belleville. In one meeting

there, he had to be protected from the mass of electors ; and in another, when he faced them, they only hooted him. Yesterday week, he addressed a meeting held with tickets and...

The condition of President Garfield is one to inspire grave

anxiety, though the last accounts of him are decidedly better than those received early in the week. Inability to retain food and violent vomiting came on, ascribed by the...

In the second meeting, held on Tuesday, in a crowded

build- ing calculated to hold some ten thousand persons, M. Gambetta wholly failed to obtain a hearing. Great discourtesy was shown both to him and to his Committee, and be had...

The Liberals have lost two county Members this week, in

the death of Mr. Joicey, M.P. for North Durham, and of Mr. Lay- cock, M.P. for North Lincolnshire. We ought to keep both seats, and to keep them by increased majorities. In...

At the Ministerial Whitebait Dinner on Wednesday, which was held

as usual at Greenwich, some of the Liberals of Green- wich seized the occasion to present Mr. Gladstone with a carved- oak chair, as a souvenir of his former constituency. The...

If it be true, as was stated in a meeting

held in Edinburgh against the practice of vivisection, and addressed by Miss Cobbe with her usual eloquence whenever she speaks on this subject, that a licence to perform...

Mr. Chamberlain's speech was the speech of the evening, and

was a very powerful one. Quoting an able recent paper in the Economist, he showed how mach, under Free-trade, the consump- tion of luxuries by the poor had increased in this...

The strictly legal and political duties of the Lord-Advocate for

Scotland are to be separated in future, and only the former are to be entrusted to the Lord-Advocate, while the political function of representing Scotland is to rest elsewhere....

The Bishop of Manchester,—whom we have always regarded as the

very model of a Bishop in such a community as that of Manchester,—shows a bias on one question only. He is unfair to the Ritualists. He not only permitted the prose- cution, and...

THE LAST ACT OF THE DRAMA. W E had hardly revised the words in which we predicted the ultimate surrender of the Peers, when that scornful speech of Lord Salisbury in which he...

M. GAMBETTA AND THE FRENCH ELECTIONS.

T HE success which M. Clemenceau's party has obtained in rendering Belleville hostile to M. Gambetta, makes the result of to-morrow's general elections a matter for a certain...

THE ADMINISTRATION OF THE COERCION ACTS.

W E approve heartily of the declaration made by Mr. Forster and Mr. Gladstone on Thursday night, deeply as we regret the conclusion to which they have, as we believe, rightly...

THE POLITICS OF THE PAPACY.

T HE Papal Question has suddenly become interesting. To what extent this is due to the noisy demonstrations of Radical intolerance which have lately brought discredit on the...

THE VICTORIAN HOUSE OF LORDS.

A T a time when our own House of Lords, under the advice of the leading Tory Peer, has just shown itself so well dis- posed, if one may use a common figure of speech, to kick...

W HEN the Civil Service Estimates were under discus- sion in the House of Commons, Mr. Labouchere made an unsuccessful attempt to stop the salary of Mr. Lascelles, the British...

I T might be a great advantage to other people besides patho- logists and doctors, to understand better than we under- stand at present the modus operandi of that class of...

T HE words are soon written down, and are not very clearly or fully explanatory, but for lack of a better phrase, they may, perhaps, be used to introduce a really curious...

THE GRIEVANCE OF BEING OVER-ESTIMATED. 4 6 Ci_IVE a dog

a bad name, and hang him," is a well-known saying ; and the harm done by harsh and ill-natured judgments of our fellow-creatures is a theme too trite to need expatiating on. But...

BACON AND SHAKESPEARE ON VIVISECTION. [To THE EDITOR OP THE " SPECTATOR:] SIR,—I do not remember to have seen any reference to either of the above writers in the course of the...

[TO THE EDITOR OF THE " SpEcTATon.."] Sia,—Those among your readers whom you have already taught to consider cats capable of strong affection will, I think, be interested in...

[To THE EDITOR OF THE " SPECTATOR."]I SIR, — Will you kindly correct an error made as to my name in the signature to the letter on "Longer Life, or Slower Death ?" in last...

MR. WARD'S ENGLISH POETS.* THESE two volumes will probably attract more readers than the earlier selections. The poets of the eighteenth and nineteenth centuries are criticised...

ABBOTSFORD. AND this is Abbotsford ? For this alone The mighty Wizard blindly tempted fate, Risking his all to reign in feudal state ? 0 vanity, that one should sweat and...

FIFTY YEARS OF THE HOUSE OF LORDS.* Tins little volume

of ninety-five pages is a very opportune publication. Its aim, which it has fulfilled admirably, is to give a sort of bird's-eye view of the influence of the House of Lords on...

THE CAMPAIGNS IN AFGHANISTAN.* IT was only to be expected

that the recent campaigns in Afghanistan would produce a literature of their own ; but so far it must be admitted that very little has been added to the stock of our knowledge...

THERE is probably not one person in a thousand who does not occasionally long for a novel to read. The idler who is con- demned to solitude at afternoon tea finds company in the...

PERUVIAN BARK* " REPLENISH the earth, and subdue it :

every tree in which is the fruit of a tree yielding seed, to you it shall be for meat." From far off down the ages comes the echo of the voice which spoke through the Hebrew...

BRYANT, MOORE, AND LOVER.* IF the reader observes that Lord

Beaconsfield's curious phrase, "Men of light and leading," is misapplied when used as a motto for these biographies, we shall not be inclined to dispute the question with him....

mainly a defence of spiritualism. He has some very strange things to tell his readers, and he has the merit of being quite candid and outspoken about the matter which he...

The Orestes of Euripides. Edited by F. A. Paley. Cambridge

Texts, with Notes. (Heighten and Bell.)—A very handy edition of one of the most popular of Euripides' plays, a good example of what is called his later style, and particularly...

The Cruise of Ulysses and his Men. By C. M. Bell. (Griffith and Farran.)—The most romantic part of the Odyssey is certainly the story which Ulysses tells at the Court of...

In the Beginning. By R. H. Sandys, MA. (Pickering and

Co)— We wish Mr. Sandys had given us a few words by way of preface, as a clue to the drift and purpose of his book, which we really mast confess ourselves unable to divine. The...

Catharine of Aragon, and the Sources of the English Reformation.

By A. du Boys. Edited from the French, with Notes, by C. M. Yonge. (Hurst and Blackett.)—M. du Boys' work gives a minute account of one of the most far-reaching events in modern...

Boswell and Johnson : Their Companions and Contemporaries. By J.

F. Waller, LL.D. (Cassell, Petter, and Galpin.)—Dr. Waller thinks that " reparation " is due to Boswell; and he does say some- thing for him, defending him especially from the...

vols. (Hurst and Blackett.)—The ingenious novelist who has written this story has already produced a very considerable library of fiction. Practice doubtless makes perfect in...

The Poems of Lord Herbei t of Cherbury. Edited, with

an Introduc- tion, by John Charton Collins. (Chatto and Windas.)—Lord Herbert of Cherbury, despite his achievements as a Free-thinker, is perhaps chiefly known to fame as the...