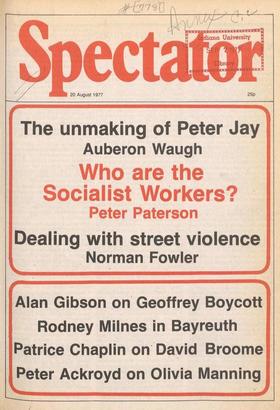 Victory at Coleraine John Grigg Last week was a triumphant one for Yorkshire (the English Texas), with Geoffrey Boycott's hundredth hundred in the Headingley Test, and Roy...

`I think the controversy hanging over our heads had some effect.' So the Australian cricket captain Greg Chappell explained his side's crushing defeat in the Test series against...

The news that the wife of the American Ambassador has observed a kestrel swooping onto her lawn to attack baby rabbits (Notebook 6 August) has been greeted with 'scepticism....

The lost leader Auberon Waugh Montmaur I do not own a television set in my French retreat, and so missed the NBC interview between Peter Jay and three of America's toughest...

Alistair Home On landing at Munich Airport, the two faces of modern West Germany immediately confront you. The first thing to catch my attention was the row upon row of...

A Calvinist in Washington

Nicholas von Hoffman Washington As long as it was possible to trick the Baptists and the Catholics into thinking of each other as natural enemies the odour of public piety...

Richard West On a bus in Johannesburg one day this year, a girl who had been looking over my shoulder at the Spectator, indicated a headline and asked: 'Excuse me, what does...

Norman Fowler Let us go back to October 1968. Then it was one or two figures on the right who were claiming that the anti-Vietnam war demonstrators should be banned from the...

Who are the Socialist Workers?

Patrice Chaplin David Broome's choice of an evening out is to go to the local cinema. He may soon have to choose something else as cinemas are Closing in Britain at the rate of...

Geoffrey Boycott, lonely hero Alan Gibson I have never thought that the Bard was quite right about names, though showing a fine carelessness about spelling his own. Names...

Sir: I can't help . wishing that Marina Warner would reread The Quiet American (Notebook, 6 August). After her moving description of the idyllic, perhaps simple, but altogether...

.Sir: 'At long last' wrote Nicholas Davenport (6 August) in praise of the 'unpegged' pound, `the Bank.of England has done the right thing.' And most of us, including those who...

Sir: It would be wrong to let Mr. Nigel Dawson's sour letter about Mr Simon Raven (6 August) go by unanswered. . 'Slipshod writing'? â Never! If he happened to be inaccurate...

Forward to the crash

Sir: Patrick Cosgrave's polemic of 6 August contains within it a number of contentious points expressed in his usual moderate fash ion. I refer in particular to where he...

Sir: Soon, probably much sooner than we think, unless the free nations suddenly display much more determination, realism, belief in the superiority of freedom over serfdom, and...

Sir: There are some times when I think that the instant analysis of the news which modern technology makes possible serves no good purpose. One such subject is Rhodesia's coming...

Sir: The other day I passed a shop which displayed for sale â at outrageous prices â specially designed paperweights in limited editions. For years I have been collecting...

Sir: Mr E. Robbins's comments on overseas aid (Letters, 23 July) purported to take us from the abstract to the particular, but soon developed into a dreary attack on socialism:...

Sir: Shiva Naipaul's Zambian ramble (1, 1 June) was most enjoyable. As a Rhodesian resident, I found myself full of glee at his delightful hole-picking of Zambia. One tends to...

Sir: Please convey to Bryan Robertson our congratulations and thanks for his article on Graham Sutherland. At last a critic's esi mate worthy of this man and artist. (Mrs)...

Peter Ackroyd A Danger Tree Olivia Manning (Waidenfeld and Nicolson Â£4.25) No one has noticed yet, but the fashion for war novels is coming back. The difference now is that...

Benny Green Tom Moore, the Irish Poet Terence De Vere White (Hamish Hamilton Â£7.50) Thomas Moore's toehold on fame continues to endure, but only just. I doubt if there is...

Tit for tat and tat for tit Rodney Milnes Innocent that I was, On my first visit to Bayreuth I looked forward simply to hearing Wagner's later works in the theatre for Which...

Ring triumph Geoffrey Wheatcroft When my colleague Rodney Milnes told me that he was going to hear the Ring at Bayreuth and asked if I would like to cover the English National...

Divine right John McEwen The world of the arts has long proved to be the last refuge of kings. Its subjects actually expect them to rule, encouraging them in their...

On the game Ted Whitehead Epsom Downs (Roundhouse) Once A Catholic (Royal Court) Add a radical writer like Howard Brenton to a radical theatre group like Joint Stock and you...

The discreet charm of filthy lucre

Marina Warner It is our ignorance that has kept the Dark Ages dark, not their lights. Between the year of the Peace of the Church in 312 and the coronation of Charlemagne in...

Authorised version Jeffrey Bernard It seemed a good idea to send Richard Ingrams to the races for some fresh air this week. I know that when I finished my television stint in...

Strawberries Richard Ingrams Visiting Newbury Races last week would make, 1 assumed, a welcome change from watching the television and what's more, it would be in colour. All...