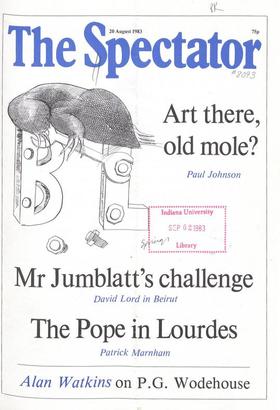 D uring the election campaign Dr David Owen described Mr Roy Hattersley as 'the acceptable face of opportunism'. After the election and Mr Michael Foot's decision not to seek...

The Shetland syndrome Jo Grimond N o cheer for the Government's perfor- mance so far: no sign that it is to tackle the causes of our distemper. if no sign now, no sign ever, I...

Charles Moore will resume his column next week

I f the Government gives the appearance, at the start of its second term, of being rather negative, of lacking the will to in- stitute great changes — apart from the disturbing...

David Lord Beirut There can be few countries in which a Saturday night's spectator sport con- sists of an artillery duel. But week by week, while the middle classes in Beirut...

The Pope in Lourdes

Patrick Marnham T here was some pathos in the fact that visit to Lourdes this week should have been P laced by a group of French anarchists in- 'lamed with anti-clericalism....

The Benefit Penny Bank, 17 Blooms- . bury Street, which was alleged to have a guarantee fund of £20,000, fully sub- scribed, and exclusively applicable for the protection of...

Nicholas von Hoffman Washington C ixteen-month-old Candy Thomas has a L./new liver, thanks to Ronald Reagan. During one of his recent weekly Saturday afternoon radio chats, the...

Richard West he return from exile of Joshua Nkomo, if not one of the most important events in Zimbabwe's history, will surely be one of the least well reported. This is because...

Christopher Hitchens San Francisco 'To leave San Francisco and cross the Golden Gate Bridge — an uplifting ex- perience in fog or in sunshine — is to enter Marin County. The...

On the Greenham bus

Andrew Brown P erhaps they're the last hippies. They're certainly the latest, and to understand them one must return to the first. 'The Merry Pranksters' were originally just...

John Stewart Collis R ecently I found myself on the South Cay, which is the smallest island, and furthest from the shore, out from Port Royal at Kingston in Jamaica. It...

Art there, old mole? Paul Johnson T he whole of history, and especially recent history, teaches us never to u nderestimate the destructive element in human nature. Do people...

Rise and fall of a fever

Colin Welch A n elderly friend of mine had an eye operation under local anaesthetic. Afterwards he was propped up in bed, unable or forbidden to move his bandaged head to right...

Sir; Mr Worsthorne's encounter with two undressed people on the

tube (Notebook, 6 August) seems to have provided the inspira- tion for an attack on all youth. I find myself as surprised at the antics of older people. During the same...

Von and games Sir: As someone who knew the late Frau Jonna Btllow and her gregarious get-ahead son Claus more years than I care to think of before that alleged 'rascal' chose...

'Sir: Since introducing my Right of Reply in the Media Bill 1 have found that newspaper proprietors and their editors do not like it — but that the general public in fact do....

Sir: I am writing more in sorrow than in anger. In my opinion Mr von Hoffman's ignorance can only be matched by his arrogance (13 August). Will such people never learn? Having...

Sir: Peregrine Worsthorne complains (6 August) of the two half-naked youths in the underground who dribbled malodorous hamburgers down their hairy chests, thereby abolishing the...

Francis King rr hese two collections of short stories, 1 the first by an American woman and the second by an Englishman, are totally dissimilar. Though Bobbie Ann Mason now...

The world of Ukridge

Alan Watkins M y father's library was small but for- midable: Ruskin, Carlyle, Froude and Matthew Arnold, Gibbon and Mommsen, that kind of thing, most in the old Everyman...

The sailors' lament Peter Ackroyd Querelle ('I8', Screen on the Hill) E xciting news, last spring, that there were long queues of Parisians waiting to see this film; bars...

Bookmarks Giles Gordon W anderin g around a book fair a felt months a g o, my eyes paused, as I browsed throu g h a bookseller's catalogue on his stand, at item 193: 'TYNAN,...

Monstrous Richard Ingrams by Weighell? The question reverber- ated in my mind after the latest of Dr Anthony Clare's Motives on BBC2. If a trade unionist is to be interviewed...

Speaking terms Maureen Owen T was rather alarmed to see that Dr 1 Anthony Clare had received such a spanking on transferring his psychiatrist's chair from radio to television,...

Lament Taki Athens Mo. 2 Boulevard Reine Olga is the add- l. ress of what used to be known as the Royal Athens Lawn Tennis Club. I say used to, because about nine years ago,...

Queer Street Jeffrey Bernard H omosexual, poof, queer, gay? I wa s brought up to use the word queer. And queers aren't what they used to be. 1 was discussing sex as usual with...

Morbid P. J. Kavanagh A couple of sixth-form schoolboys were sitting at our table the other day hav- ing breakfast, and one of them spotted a copy of the Spectator. 'Is that...

Wine Club Auberon Waugh A strange and rather mixed list for August. I swore to find a Hermitage offer after reading that it was the favourite wine of Conor Cruise O'Brien (a...

Waiting game Raymond Keene The uproar surrounding the fiasco of the Candidates' semi-final, has, ironically , created more publicity than if the matches had actually been...

Charles Seaton reports: Competitors were asked for verses entitled 'On Finding a Wheel Clamp on my Car.' This minor calamity doesn't seem in fact to have happened to any of...

No. 1283: Acrostic Set by Barney Blackley: Comments, please, on this journal and some of its regular features or contributors, in 12 lines of verse, the first letters of which,...

Solution to 618: Men of capital

T hirteen workers were sacked by the BL car factory at Cowley for deceiving the company on their job application forms. The workers, promptly dubbed 'moles', were suspected of...