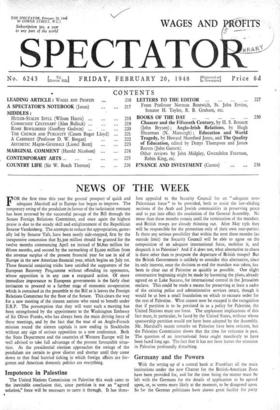 The United Nations Commission on Palestine this week came to the inevitable conclusion that, since partition is not an "agreed solution," force will be necessary to carry it...

F OR the first time this year the general prospect of quick and adequate Marshall aid to Europe has begun to improve. The temporary swing of the pendulum in favour of the...

Germany and the Powers

With the setting up of a central bank at Frankfurt all the main institutions under the new Charter for the British - American Zone have been provided for, and for the time being...

The result of the plebiscite conducted by the British Medical Association on the National Health Service Act creates a situation that must be faced without delay. It was...

The obduracy of the Government in the matter of the abolition of university constituencies is to be profoundly deplored. It cannot be said that the discussion of the question in...

The dispute in the Antarctic between Britain, Argentina and Chile must be taken seriously, though not as seriously as the congregation of warships in these waters might suggest....

The end of the domination of the Fianna Fail party in Eire is more conclusive than the creation of the coalition which now assumes office. Mr. de Valera has not been a dictator...

AT WESTMINSTER E XCEPT on rare occasions, the colour of Parliament

today is confined to the spoken word. Monday, however, was one of the rare but pleasing exceptions. The colour was provided by the traditional pageantry of the presentation of a...

Proposals to strengthen the bonds of the Commonwealth may be sure of a generally sympathetic hearing, but that is about all they can be sure of. We are conscious that while the...

The coal industry is not doing nearly well enough. The good performance at the end of 1947 was largely seasonal, and it has not been kept up. Average production in the first six...

N OBODY could deny that the official statements of the past fortnight have thrown much light on Britain's economic situation. But it is equally clear that, harsh as that light...

I mentioned last week, with some scepticism, Lord Samuel's sug-

gestion that a Meredith vogue, like the recent Trollope vogue, might be in prospect. It is not a matter on which much decisive informa- tion can be available, but the Oxford...

T HE action of the Evening Standard in publishing on Wednesday. afternoon the figures of the British Medical Association plebis- cite, which were not meant to be made public...

Rarely have I heard so remarkable a cumulative tribute as

was paid in the debate in the House of Commons on university repre- sentation this week to the late Eleanor. Rathbone. There was nothing premeditated about it. Miss Rathbone was...

the German official archives contains one singularly interesting entry. On April 24th, 1944 the German Naval Attache at Moscow cabled to the Naval High Ccanimand: " According...

There seems to be some trouble about blue-prints. Mr. Bevin

used the word wrong. (Here I must interpolate. I have been accused of saying " wrong " when I should have said ." wrongly." Not at all. " Wrong " is an adverb as well as an...

My observations last week on the inadequacy of the salaries

of Judges find appropriate comment in the statement made on Wednesday that Lord Citrine, who not so long ago was secretary of the Trades Union Congress, now draws £8,500 a year...

By WILSON HARRIS T HE wrathful reactions of the Kremlin tathe documents on Nazi- Soviet relations 1939-1941 recently published by the United States Department of State are...

By ALAN BULLOCK A HUNDRED years after its publication in February, 1848, the Communist Manifesto still makes - excellent reading. It is written with uncommon power, and the...

By GEOFFREY GODWIN L AST Monday, when I elbowed my way from the station and into the streets of Rome, the sun shone on what might well have been a Hollywood set. The sidewalks...

By LIONEL BRETT O N the Appointed Day, said to be the first of July, 1948, the mysterious powers the resultant of innumerable divergent ambi- tions, by which towns and villages...

By HAROLD NICOLSON I AM not a nervous speaker, but I confess that during the ten years that I sat in the House of Commons I was never able completely to master the terror which...

THE THEATRE " The Vigil." By Ladislas Fodor. (Embassy.) THE fact that the story of the Resurrection has been supremely well told elsewhere does not necessarily preclude further...

" The Red Stallion." (Gaumont.)—" Against the Wind." (New Gallery and Tivoli.) WHETHER Cinecolour is a cheaper brand of Technicolor I do not know, but, whereas the latter...

Two works by Stravinsky, new as far as this country is concerned, would have made an eventful week twenty years ago, but even his warmest admirers must admit that there is every...

Amusement was caused some while ago in the House of Commons as outside by the appearance of " black plover "—a bird that does not exist—on the menu. This phrase seems to have...

AT Oxford some while ago a more or less individual enquiry was set afoot into the vagaries of our population of four-footed animals. Some quaint results were reached especially...

In the Garden Has anyone explained how it comes about

that the winter-flowering shrubs, which are seldom visited by insects, are peculiarly sweet-scented? A single bough of Chimomanthus, or winter-sweet, scents the whole room in...

A Village Regret All country people, especially perhaps the cottage

population, regret the disappearance of the great country house and its park. It added as nothing else could to many . amenities, and was essentially a common possession. Its...

A ROOMFUL of Ardizzones is a pleasant relaxation. His peeps through the keyhole, round the plush curtain in the pub at the man in the bowler hat, over the gate with the two old...

SIR,—Mr. Hodgkin in his article on Palestine would substitute for

the old "illusions " a system of new myths more misleading than any of them. (1) Zionism has " grown," he says, implying that it has lost its innocence. The truth is that in...

Sta,—Mr. J. L. Barlow's illiberal letter in last week's Spectator must have shocked you, both as a man bred in a Liberal tradition and 23 ' the editor of a review with a long...

SIR,—Readers of The Spectator will be grateful for Edward Hodgkin's

objective exposé of intransigence on either side in Palestine. But the prospect of the role of an onlooker for Great Britain after next May should have been shown more clearly...

" THE UNHOLY LAND" StR,—Mr. Hodgkin's article on The Unholy Land gives the gloomy prospect of war as the only way out of the conflict. Having just returned from the land, I...

Sm,—It would be very helpful if you could persuade your

colleague Janus to instruct you as to the significance of the word " direction." The medical profession holds one view while you hold another. At present we may set up a...

sm,--It is depressing to find that your article The Doctors' Decision reiterates the ex cathedra statements made in your columns at intervals during the past few months and...

Stu,—You are accurate in your statement that a doctor is

completely free to participate or not participate in the national service, but for the specialist the choice is circumscribed. On the appointed day the hospitals he now serves...

Sta,—The letter in your issue of February 13th from Mr.

J. L. Barlow is amazing, amusing and illogical. He advocates that Northern Ireland, an integral part of the United Kingdom, be denied representation at Westminster because there...

Sia,—May I express my- deep appreciation of the trenchant and timely letter from Mr. J. Spedan Lewis. His main point—that we must shoulder the chief responsibility for the...

Snt,—Coal and oil are wasting assets, but ocean winds will blow for ever. Speed maniacs may class sailing-ships with stage-coaches as being too slow ; but real or artificial...

SIR,—Is there not a slip in your leading article on

The Doctors' Decision? You suggest the possibility of guaranteeing " every practitioner entering the service a fixed maximum of capitation fees." Should not " maximum " [It...

Snt,—The tables from The Economist, dated November 15th, 1947, quoted by Mr. Beck for comparative purposes in your issue of February 13th, 1948, are unfortunately chosen, in...

SIR,—As the active head of a large manufacturing business for over half a century, I have had to study human nature. But I confess myself puzzled by the general attitude of the...

Sm,—In your article on University M.P.s in the issue of February 13th you refer to Mr. Pitt's dying words, " How I love my country." Surely it was he who spoke the notable last...

am grateful for Mr. Cuttle's most appropriate tribute to the late Master of Downing. Admiral Richmond was actually an excellent example of the truth that the scholar can also...

Snt,—It has been drawn to my notice that in the third paragraph of page 183 of your issue of February 13th you state, " Nor does it seem congruous to the traditions of the...

Anglo-Irish Relations. By Hugh Shearman. (Faber and Faber. 16s.) THIS is a book in which the promise of the opening chapters remains unfulfilled.. What begins as a history ends...

0.H.E.L. It looks as if the new Oxford History of English Literature will vary as much volume by volume as did the old Cambridge chapter by chapter. But who would look for...

THE title and price of this monumental work, together with the legend, " Five hundred copies of this book have been printed and the type has been distributed," testify...

The Stature of Thomas Mann. Edited by Charles Neider. (New Directions. $5.) MR. NEIDER has collected an international body of writing, critical . and hagiographic, which...

When You Are Old

Old Age : Its Compensations and Rewards. By A. L. Vischer. (Allen and Unwin. 12s. 6d.) FOR twenty years Dr. Vischer of Basle has been in charge of furnished houses provided by...

The Magnet of Doom. By George Simenon. Translated by Geoffrey Sainsbury. (Routledge. 9s. 6d.) The Moot Point. By Peter De Polnay. (Hutchinson. 9s. 6d.) FROM every point of view...

" Fox a multitude of causes, unknown to former times, are now acting with a combined force to blunt the discriminatng powers of the mind." The words are Wordsworth's, written in...

[A Book Token for one guinea will be awarded to the sender of the first correct solution of this week's crossword to to opened after noon on Tuesday week March 2nd. Em'elopes...

SOLUTION TO CROSSWORD No. 463

The winner of Crossword No. 463 is THE Rev. CANON Farndon, Cheshire. MARCH 5th HOUGHTON, SOLUTION ON

By CUSTOS EXPERIENCE in the field of profit and price control, as distinct from taxing profits after they have been made, is so limited that one need not be surprised that...