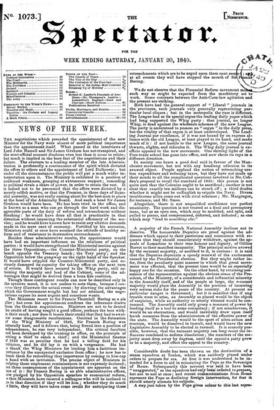 'NE negotiations which preceded the appointment of the new Minister for the Navy were almost of more political importance than the appointment itself. What passed at the...

We do not observe that the Financial Reform movement m

such way as might be expected from the machinery set to work. Some contrasts between the Anti-Corn-law agitation and the present are striking. Both have had the general support...

A majority of the French National Assembly inclines not to

dissolve. The honourable Deputies are proof against the ad- dresses which appeal to their patriotism and conscience with re- quests that they should considerately withdraw,...

Considerable doubt has been thr3wn on the destination of a

steam squadron at Toulon, which was suddenly placed under orders to prepare for sea. At first it was understood to be in- tended for a force to aid in reinstating the Pope as...

7 . 0as Queen held a Privy Council on Monday afternoon, at which there was e full attendance. Sir Francis Baring was presented, kissed hands on helpg appointed First Lord...

A remarkable turn is given to political debates in the

Austrian mid German Assemblies : while Austria is struggling in an equivocal regeneration, and embryonic " Germany " is tottering towards a premature dissolution, the leading...

A Court of Aldermen sat for despatch of business on Tuesday, but no matter of public interest was discussed. A Court of Common Council was held on Thursday, for the despatch of...

Sir Francis Baring's seat for Portsmouth having been vacated by his acceptance of a Government office, as First Lord of the Admiralty, he has solicited reelection by the...

The Lord-Lieutenant has appointed Mr. Pierce Mahony to the office of Clerk of the Crown to the Irish Court of Queen's Bench, vacant by the re- cent demise of Mr. Bourne. By the...

Decided symptoms of revived trade are reported from Glasgow and Aber- deen, and there are general indications over the whole country of increased employment and prosperity....

ffortign anb FRANCE. —Last week we mentioned the commencement of the

debate in the National Assembly on M. Rateau's proposition for the dissolution of that body on the 19th of March. The discussion, which began on Friday, came to an unexpectedly...

Tuesday's Gazette formally notified the appointment of the Right Ho- nourable Sir Francis Thornhill Baring, Baronet, to be First Lord of the Admiralty. The members of the patent...

SATURDAY. Anticipatory despatches of the overland mail bring intelligence from the Punjaub to the 5th December; from Hongkong to the 30th November. The news from the army on...

The Times mentions, in order to contradict, the reports that

the Treasury investigation, carried on by Mr. Gibson Craig and Sir Charles Trevelyan into the establishments under the three Secretaries of State, had met with some objection:...

Prince Windischgriitz has issued the following proclamation for the ex-

press behoof of the Hungarians: its savage cruelty confounds all distinctions of innocence and guilt- " Head-quarters, Nicola, 26th December 1348. "Any inhabitant who is taken...

Cape Town papers to the 22d November report a meeting

held by the inhabitants, to petition against the proposed introduction of convicts, what- ever the nature of their crimes. The arguments were temperate and ear- nest, the...

The President of the French Republic transmitted to the Assembly,

on Thursday, his nomination of three persons from whom is to be chosen the Vice-President of the Republic. The names were these—M. Boulay de is Meurthe, M. Baraguay d'Hilliers,...

It Is due to oar readers abroad to make them aware that we have been compelled to adopt therule of not taking in unpaid letters or packets by foreign posts, from corruponden Is...

STOCK EXCHANGE, FRIDAT AFTERNOON. The aspect of the market has been the same as for many weeks; a decided ten- dency upwards being observable. The settlement of the Consol...

The Marylebone Theatre has this week risen into some degree

of literary importance, through the production of a play written by Mrs. Mowatt, who acts the principal character. The story is pretty enough; and the tone of the piece reminds...

duced at the Princess's on Thursday. This piece, though constructed of very ordinary dramatic materials, has much musical merit, and was, when originally produced, almost as...

The season of the Opera Comique at St. James's Theatre, under Mr. • tehell's management, commenced on Monday. A contemptuous opinion of French music has been a vulgar error,...

The Hamlet of Mr. Charles Kean, with which he recreated

the Court on Thursday and the Haymarket public on Monday, exhibits him to more ad- vantage than any character which he has acted since the production of the Wife's Secret. As...

TO THE EDITOR OF THE SPECTATOR. London,16th January 1849. SIR—There does not appear to be any public opinion as to the exact nature of the Probate and Legacy duties, or their...

TO THE EDITOR OF THE SPECTATOR. SIR—In some previous letters you have permitted use to maintain in your 'Alumna that "by far the greatest improvement that could be made in...

THE GUARDS OF PEACE. Pne.cn abroad and at home is the object of two sections of the political world as distinct as it is possible for separate circles with a common object to...

THE VICE OF THE DAY.

IN the common run of worldly affairs, at every period, there is some overruling dogma which exercises an oppressive tyranny on the general herd of men. By "a beautiful provision...

THE CONFUSION OF THE POOR-LAW.

Fort three centuries have the estates of the realm been legislating against " sturdy vagabonds and valiant beggars," and still the peaceful citizen is defrauded by the professed...

Wa learn with deep regret that the reformatory settlement of Mettray, near Tours, is in danger of being broken up, through the disordered state of the national finances :...

ROBERT E. LANDOR'S FOUNTAIN OF ARETHUSA, * Tars work, by the brother of Walter Savage Landor, is a philosophical fiction, designed to test the conduct of modern society by the...

RENEWAL OF THE INDIAN MAIL CONTRACT. GOVBRNMENT took a course

doubly unusual in the negotiation respecting the renewal of the contract for the conveyance of the Indian mails,—first in throwing the service open to renewed com- petition when...

MR. THOMPSON'S AUSTRIA.. * ALTHOUGH well acquainted, as he thought, with

Germany, Mr. Thomp- son found when he entered Austria, that he not only knew nothing of that country, but that his supposed knowledge was erroneous. "Circumstances of a peculiar...

LAMARTINE'S RAPHAEL. * IN one of the French memoirs of Lamartine,

and doubtless in many Eng- lish imitations or translations, there is an allusion to something mys- terious in which the poet was engaged in very early manhood. Of course the...

SAND AND CANVASS. * MR. BRYAN has spent upwards of three

years in Egypt and Italy. In Egypt he was in the employ of the overland transit company before it passed from the hands of Waghorn and Co. : in Italy he lived among the artists...

Professor Woodcroft's Sketch of the Origin and Progress of Steam.

Navigation is a valuable book for those who wish to have a complete record of the different attempts that have directly or indirectly been made towards this great discovery in...

Although full of the faults that spring from the greenness

and suffi- ciency of youth, there is more promise in Ambarvalia than in the great mass of verses that continually come before us. Whether this promise is to run wild and waste...

Brampton Rectory, or the Lesson of Life,is a religious tale,

designed to uphold the doctrines of the Church of England, and the practical views of true Churchmen, equally against High Church and Low Church, the Tractarians and the...

Mr. Gosse is favourably known for a book on the

Birds of Jamaica, which combined a naturalist's scientific knowledge with vivid powers of delineating the habits and characters of the creatures themselves, as well as of the...

BIRTHS. On the 3d January, at Florence, the Lady Charles

Beanclerk, of a daughter. On the oth, at Larkhill, Liverpool, Mrs. 13. Heywood Jones, of a son. Bathe 12 th, Efford House, Hants, the Marchioness of Hastings, Baroness Grey de...