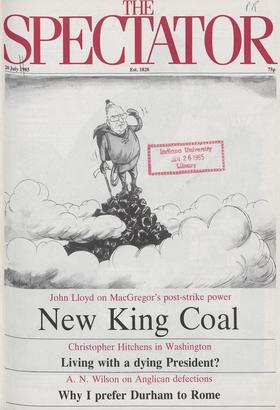 P resident Reagan went into hospital for a cancer operation: a small growth was removed with a portion of his colon, but his doctors claim that he will make a full recovery. He...

BURNING HATRED W hen is mass murder news? Three British children and their pregnant mother were burnt to death over the weekend after an arson attack at North East London. Had...

WEDNESDAY'S Daily Express devoted the whole of its front page to a 'picture e xclusive' about the killing of pilot whales m the Faroe Islands. 'Blood on the beaches', said the...

IT WAS daring of the feminists to hold their conference of the United Nations Decade for Women at Nairobi, the holy place of male supremacy. Indeed the mili- tant anti-feminist...

The cutting edge which Mrs Thatcher has never gained CHARLES MOORE I t has often been pointed out that it is a waste of time for anyone to try to alter the Prime Minister's...

I have a possibly dubious tip which may be useful to anyone enduring hospital menus. Recently sprung from Intensive Care, I remembered Somerset Maugham's advice that the only...

Time for all good men to climb on the Band Aid bandwagon AUBERON WAUGH T he 1980s will be culturally defined by Band Aid,' pronounces Ms Julie Bur- chill, the post-teenage...

John Lloyd on the efforts of Ian MacGregor and his pit managers of the Coal Board to destroy the power of the union ON THE walls of his colliery, pickets had written: `Bulmer...

THE CRIPPLING OF REAGAN

Christopher Hitchens suggests that Mr Reagan's cancer now makes him President only in name Washington THE QUESTION I had been wanting to ask did not come up until half way...

Mark Frankland on the Soviet leader's new populist style Moscow SOVIET officials sometimes rebuke for- eigners, above all foreign journalists, for paying too much attention to...

THE APOSTLES OF THE SLAVS

Timothy Garton Ash on they way communism has provoked religious revival MORE than 100,000 people gathered in the Moravian village of Velehrad earlier this month, to mark the...

Richard Bassett on how the Hungarian bishops are letting religion be ground down Pannonhalma THERE HAVE been Benedictines in western Hungary since the year 1001. Their greatest...

WHY I SHALL STAY AN ANGLICAN

A. N. Wilson prefers the advantages of truth to those of authority IT IS hard to write about bishops these days without being offensive. And I fear I will not be taken...

Broadcasting: Paul Johnson on the evils of a television cartel UNLIKE a great many people ; I have never seen the television serial Dallas. I understand it is quite dreadful....

The news from St Petersburg and Afghanistan is far from reassuring. It is admitted that there is another hitch in the negotiations. The Russians wish so to define the Zulfikar...

Of smoke signals, and the shape of things (maybe) to come JOCK BRUCE-GARDYNE lot of our members,' we were told last week by one of the CBI's in-house economists, 'had been...

THE bad news from Robert Flemin g is that he has lost a few hundred thousand pounds (chairman Joe Burnett-Stuart's breezy phrase) by settin g up as a freelance stockjobber. The...

WHEN IS a cartel not a cartel? Answer: when it's a g entleman's a g reement. No business could be more g entlemanly than commercial television, as witness the stiff upper lips...

THE Barclays affair is re g arded throu g h- out the City as the test case for g olden handcuffs. Can the buyer of a firm effec- tively bind its key people to stay? Con- tracts...

Sir: Paul Johnson in the 6 July issue of the Spectator suggests a possible case for pro- secuting television 'as an accessory after the fact of murder, kidnapping and aerial...

Sir: Can anything be done to save the word `theological' from going gaily into perma- nent loss of meaning? Increasingly, it is used by trade union leaders, politicians, and...

Sir: The anonymous (why?) author of the profile of Betty

Kenward (6 July) has been misinformed. Mrs Kenward's position nev- er at any time 'became a shade tenuous'. She was as highly thought of and as valued in the Seventies as she is...

Sir: Your profile of Mrs Betty Kenward (6 July) did less than justice to the subtleties of her remarkable prose style. Much of Jennifer's genius lies in the fantasy of...

Sir: A propos Dr A. L. Rowse's stimulat- ing letter (6 July), I regard myself as a second-rate person rather than a third-rate one, and I hope this evaluation will be accepted...

Sir: As the subject of 'mooning' at Greenham Common has raised its ugly head (?) in your columns (Home life, 13 July), may I submit to you an epigram (veiled in the decent...

Sir: I was also upset to find the 'gays' in the Salisbury and almost afraid to go down the steep stairs there to find the john. Unlike Alan Watkins (Diary, 29 June), I put the...

Research under attack: promise aborted by the misplacing of funds COLIN WELCH W ith his usual self-lacerating regret, Sir Keith Joseph in a recent interview deplored his own...

His full folly he would not confess to; He could not judge what showed his better sense; His vices — he was reckoned to possess few Were, like his many virtues, a pretence. C....

A true poet from the great world

Bohdan Nahaylo HOW DEMOCRACIES PERISH by Jean-Francois Revel Weidenfeld & Nicolson, £12.95 T his is a powerful and pugnacious work, even if the subject — the West's...

Delightful, but depravity's not there

Philip Glazebrook OXFORD BOOK OF AGES chosen by Anthony and Sally Sampson OUP, £8.95 L ike the album known to contain a photograph of yourself, the Oxford Book of Ages, with...

Modesty and moderation allow spills but no thrills

Patrick Skene Catling HERE LIES ERIC AMBLER by Eric Ambler Weidenfeld & Nicolson, £10.95 mysterious gas which may have caused all his car into a ditch beside the Lausanne-...

Learning to read you, twenty years ago, Over the pub lunch cheese-and-onion rolls; Learning you eat raw onions; learning your taste For obscurity, how you encode teachers and...

Lewis Jones STILL LIFE by A.S. Byatt ChattolHogarth, £9.95 S till Life is a romance of academe, of Cambridge in particular. Frederica Potter, the heroine, receives telegrams...

Albert Herring (Glyndebourne) Magical breakthrough Rodney Wiles do not believe it is an exaggeration to describe Glyndebourne's new staging of Britten's comedy as a...

Return to Oz (`U', Leicester Square Theatre) A paler shade of yellow Peter Ackroyd T hose who return to the haunts of their childhood generally discover that such places are...

Sporting life Noel Malcolm A ccording to Vatican Radio, the Holy Father recently gave an audience to a deputation of Spanish cyclists in which he `re-affirmed the value of...

Getting down to business Taki imagine that there must . have been some Spectator readers among the contri- butors to Live Aid, although not among the 1..9 billion that...

Saint Bob Alexander Chancellor S hould Bob Geldof be knighted or given the MBE? Should he be awarded the Nobel Peace Prize, or should he not? These are tricky questions which...

Jeffrey Bernard S he could be mad. Only time will tell. She has a book about the 50 worst movies ever made, with quotes from the dreadful scripts and the gem from Genghis Khan,...

Baby talk Alice Thomas Ellis I was sitting quietly in the drawing-room yesterday evening when I heard somebody calling my name in the garden, so I stepped on to the balcony...

No. 1381: Strong medicine Set by Jaspistos: Two poetasters, named Wilhelmina Stitch and Patience Strong, used to (and for all I know still do) write a daily newspaper column of...

Unpompous circumstance P. J. Kavanagh E dward Fitzgerald described marriage as 'standing at your work-table with a clear mind, and a big bonnet knocking at the door and asking...

Jaspistos reports: Competitors were asked for a poem beginning 'Jenny kiss'd me when we met' but, unlike Leigh Hunt's, expressing displeasure on the occasion. Jenny came in all...

To enable competitors to economise on postage, entries for one or more weeks of the competition and crossword may be posted together under one cover addressed `Competition...

Prime specimen Raymond Keene J on Speelman's performance at Taxco is the best ever by a British player in the Interzonal stage of the World Cham- pionship. Indeed, by virtue...

Auberon Waugh T he chief appeal of this offer is the first wine on the list. For 12 months I have been tasting first 1982 then 1983 red Burgundies, searching for a single...