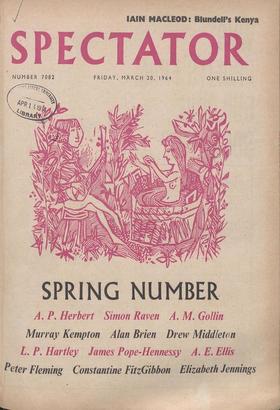 MHE condition of much of Britain is no 1 cause for self-congratulation. This is often the result of our coarse disregard, as a community, of the quality of our environ- ment. It...

Portrait of the Week— THE TORY REBELS trampling over the

Heath were winning their battle, with 150 amendments to the price-fixing Bill to help them. Off the Hogg's back may go Crossman, not the MP but his cousin, about to go down the...

Home In The West

By 3. W. M. THOMPSON O NE must give a Prime Minister his due. Sir Alec Douglas-Home goes down like a peppermint cream with the Tory womenfolk. Watching him. and his audience,...

Poor Old Jo By DAVID WATT AFren the whip,, corn. If the Liberals have been suffering under the knout applied to them in these columns last week by Mr. Henry Fairlie (and to...

By LAIN NIACLEOD rr ins is a magnificent book.* It isn't and I doesn't purport to be a full history of Kenya over the last forty years, nor of the tangled story of her march...

By DREW MIDDLETON PARIS ( - NNE people's view of another is usually sus- ceptible to a time lag of about ten years. British cartoonists were still drawing Americans dressed...

Slaughter of the Innocents

T 1111, voters of New Hampshire were the first Republicans to pronounce a judgment on the more active aspirants for a chance at President Johnson next November; and, within less...

The Broad Aims of the Party

From SARAH GAINHA m HANOVER HE Christian Democratic Union, the party 1 which has ruled Federal Germany for all its fifteen years, is hardly a national party at all in the...

The 'Spectator' at Easter

Next week the 'Spectator' will be on sale on Thursday. It is regretted that last week's issue was, for reasons beyond our control, late in reaching some areas. We apologise to...

The Winds of Change in Eastern Europe

By WILLIAM DEAN IF the dispatch of Ion Gheorghe Maurer, the J Rumanian Prime Minister, to Peking had been Mr. Gheorghiu-Dej's first independent move inside the Communist camp,...

Tailpiece Four cheers for the decision that Sir Michael Balcon

and his merry men are to run British Lion. The Spectator takes a modest pride in the part it has played in the result. At a celebration party' both Boulting brothers expressed...

Galloping Fever Two weeks ago, so a respected rival journal

assures us, the Labour Party in Parliament faced grimly up to the prospect that their long lead in the poll charts had disappeared. Ashen-faced they murmured in unison. 'we have...

Frustration is so much a part of the creative architect's lot today in this country that one feels a vicarious pleasure in the unique opportunity suddenly presented to Peter and...

Who Speaks for Me? I have just received my new

copy of the Auto- mobile Association handbook. It has been sub- jected to certain austerity measures, I see. For one thing, it will have to last for two years in stead of one as...

With the arrival of the first contingent of the UN force in Cyprus it looks as if the really critical situation may at last be over. It has given Way in fact to one of unending...

This in reply to those correspondents who ask me how my two chess games with Philidor are going. We have taken them at a very gentle pace and have only reached the El Alamein...

All this is nothing, however, compared to the complexitieS of finding a mediator acceptable at once to Cyprus, Greece, Turkey and Britain. The following are out anyone whose...

Winning the Presidency Just a hundred years ago, a few

days after Ulysses S. Grant was placed in command of the entire military forces of the United States, The Times at least had no doubt where lay the canker at the heart of the...

OCCASIONAL Paper No. 3 published by the Institute of Economic Affairs is an entrancing academic argu- ment about the National Health Service. On my left the redoubtable...

Keeping up with the Moonses

By A. P. HERBERT 'for you can take your mind off the Screatles 'for a minute or two I feel it right to bring you up to date about a kindred subject, the moon. The senior...

Strachey, Bonar Law and the Army

By A. M. GOLLIN UIFTY years ago this month the nation was 1 trembling on the edge of rebellion and civil war in Ireland. The Conservative leaders were outraged by the plans of...

The Unprofessional Punter By SIMON RAVEN, An understanding friend lent me the use of his spare bed and the domestic and culinary ser- vices of his resident mistress. Bread and...

Ste,--The leading article in your issue of March 6, concerning

university education, with particular reference to the universities of Oxford and Cam- bridge, displays a not uncommon indifference to the facts. Taking the latest UGC figures...

A TRIAL IN SPAIN

SIR,—During the recent murder trial in Barcelona allegations were made by two of the defendants of the duress to which they were subjected while in prison. A Spanish woman,...

SIR,—Poor, witless Mr. Fairlie! On the very day that he

vomits over a page of the Spectator, Mr. Grimond puts on a brilliant performance on tele- vision, and gives the lie to every fatuous word Mr. Fairlie spewed forth. Timing is...

SIR,—Unlike the three college teachers who, ex- pectedly, have written

in bristling haste to protest at your assumption that undergraduate teaching is not the important activity here and at Oxford, I find my- self delighted at the compliment you...

SIR,—For a projected biography of George Padmore, I would like to contact any persons who knew him and/or have letters or other papers which might be pertinent to my study. All...

SIR,—Your 'Spectator in Cambridge' writes that the old enthusiasm for

political debate is no more. He may be right that interest in party politics is waning, but he completely overlooks the significance of the University United Nations Association...

SIR,—Mr. Mackenzie reports that. a South. African journalist will appear on a subversion charge arising from a cable sent to the paper Contact, and con- cludes that 'the South...

SIR, —Ref. Quoodle's Tailpiece last week . . I invite your correction, but Miss Parker did not, I think, fwow up on account of C. Robin (whom, incidentally, I remember in real...

STUDENT COUNCIL SIR,—Christopher Makins's view of the Student Council at

Oxford is at least novel: 'Such a collec- tive body runs clean against the idea of co-operation between the Senior and Junior Common Rooms and thus contradicts the old system.'...

SIR,— Randolph Churchill falls into his own net. He swipes at three popular papers for reporting only the snob-appeal election of the new Oxford Union President, Lord James...

SIR,—May I—with the cautious disclaimer that I am not an economist—comment on Mr; Leybourne's article (March 6)? It would be most unwise for anyone to suppose that the Geman...

By CHRISTOPHER BOOKER I make no apology for exhuming the subject —for undoubtedly some of the ideas and inten- tions behind cinema-verite are from now on going to have an ever...

The Seagull. (Queen's.) - A Kayf Up West. (Theatre Royal, 'Strat- ford, E.)—The Royal Commission Rev u e. (Mermaid.) THE English like their Chekhov to be a study in decaying...

THEY say when Beardsley was all the rage Beardsley faces sprouted everywhere overnight: ' you couldn't walk down the street with- out finding his character- istics or...

Digging Up the Past

The Dutchman may be immature: its text may be naïve; the music's Weberian and other deriva- tive streaks may vex the purist (although they have never vexed me). But one thing at...

By JAMES POPE-HENNESSY V 1VID and successful biography depends upon three factors — the skill of the biographer, the intrinsic interest of his subject, and the quality and...

THESE are three good books, two scholarly, one journalistic, and all three readable and interest- ing. The Berlin Wall gives a competent summary of how and why the Wall was...

1 never saw so many people cry Before these months: or cried myself so much. There's little violence, very few here die, And yet a look, a sudden noise, a touch Can shake a...

Are You a Monster ?

By PATRICK ANDERSON Le't's start with the monsters. A monster, I should explain, is a human being so simplified, falsified and generally caricatured by the over- development of...

BOND, incredibly, is married: but not to worry, fans, it only lasts a few hours, after which it's the long box for Mrs. B, murdered by Ernst Stavro Blofeld of SPECTRE. Bond,...

I have been grave all afternoon; Full of responsibility, heavy With sense of failure; riffled an hour Through manuscripts, jotted and scowled, Achieving nothing. I forget What...

Philosophy and the Historical Understanding. By W. B. Gallie. (Chalk) and Windus, 30s.) RECENT philosophy of history has been very largely concerned with a question about 'ex-...

WHEN Aristide Briand recalled Talleyrand's tart observation that 'war is too serious a matter to be left to soldiers' in the middle of a war which had conspicuously baffled all...

We need nothing, to salute diminutive silences (Lapsed conversation, mute street, Flowery hollows between the chimes of a clock) But the sudden peace of themselves. Touch of a...

By A. E. ELLIS A Handful of Dust was published in 1934, six years after Mr. Waugh had written the best comic novel of the century in this, or probably in any, language. A new...

Fiasco in the Fjords

Norway 1940. By Bernard Ash. (Cassell, 42s.) IT is arguable that the Allied (but preponderantly British) campaign in Norway was less calamitous than it seemed at the time. The...

By CUSTOS E Quiff shares in the free world markets d are moving in a contradictory fashion. In America the Johnson bull market is firmly under way and is attracting funds from...

A Stake in the Country

By NICHOLAS DAVENPORT The Labour Party would solve the problem (a) by outright nationalisation of part of the wealth in private hands and (b) by giving social priorities to its...

y LOT iiBUR Y A GooD r-covery in profits for the year ended A September ,•.30, 1963, is reported from Lindustries, the group whose interests are in textiles, fabrics,...

Advise and Dissent By LESLIE ADRIAN ADvicE-GiviNo is an irre- sistible attraction But as with most sports. amateurism is having to give way to the profes- sionals these days....

By ALAN BRIEN If he were to run with the wolf-pack, it was felt, he must learn how to hunt. The time had come for him to be blooded. Even the lambs were complaining of his...