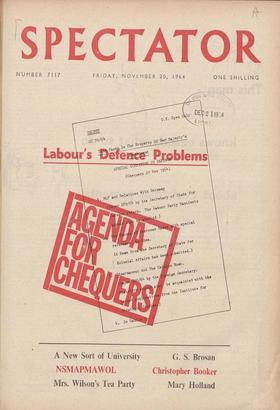 THE Government's decision to initiate a full-scale review of British defence policy at Chequers this weekend could hardly be better timed. Not only is the NATO alliance in...

FIFTY TORY MPS RUSHED to sign a Commons motion calling for a better deal for London com- muters, after rail drivers began a go-slow in support of a pay rise on top of their...

SARAH GAINDAM writes front Bonn: M R. GORDON WALKER talked to his German colleagues last Sunday, according to him- self, for rather less than half the time available about a...

When Will the Crisis Be?

PAUL LEWIS writes from Brussels: As the Common Market moves toward a Christmas which everyone has been predicting will turn out to be the most critical of its ex- istence, the...

DONALD HORNE writes from Sydney : â¢ Australia is not going to become a nation in arms just because Sir Robert Menzies has an- nounced that he is going to spend some more...

LEO BARON writes from Bulawayo With the chiefs' Lndaba and the referendum over, one would have expected Mr. Smith to allow the political temperature to subside. It has indeed...

The Way the Cabinet Works By ALAN WATKINS IN the past week the pattern of Mr. Harold Wilson's Government has become much clearer. It is now pos- sible to perceive, more...

Selling the Sun By RANDOLPH S. CHURCHILL satisfactory to the advertisers, . within the area bla bla bla' whatever that may mean. World's Press News adds this helpful and hope-...

A New Sort of University

By G. S. BROSAN O NE of the problems which led to the setting up of the Robbins Committee was that of the institutions of higher education outside the universities. It was in...

What Chance Has Mr. Brown?

By ERIC JACOBS THE task Mr. George Brown has set himself may well prove to be the major diplomatic exercise of this Government. Diplomacy is the right word, because the...

Bureau was set up to help those who retired or were retired as the dependent territories of the Commonwealth became independent. The Secre- tary of State for the Colonies in...

From MURRAY KEMPTON M R. NIXON seems to have surfaced as prime candidate to command the receivership of the Republican Party. The prize is worth having; politics remains a...

Leo Baron is well known to readers of the Spectator. A solicitor in Bulawayo (and, inci- dentally, a few years ago one of the most brilliant bridge players in Britain), he has...

Lorries on the Moors

If we can get the Ombudsman to work in time he might start by having a look at the proposal of the North Riding County Council to build a lorry route from Hetton-le-Hole to...

What is a Civil Servant?

Extract from leaflets issued this week by the Friends of Barry Goldwater in Britain: Barry Goldwater still leads the Republican Party and he has a very good chance of securing...

The Observer, in commenting on a letter of mine in The Times, misstates my view of the con- stitutional position following a government de- feat in the House of Commons. I was...

Absent With Leave By GILES PLAYFAIR Age has since taught me, of course, that paid non-jobs are by no means rarities in themselves. But if they are usually reserved, if not for...

There is chaos In Laos, And no man is an island In Thailand. The British do not give a damn What happens in Vietnam, And the Americans would feel much easier If only they would...

of Norwich, was made a Deacon of the Church of England, he was asked the question, `Do you un- feignedly believe all the Canonical Scriptures of the Old and New Testament?' His...

WORD-HAPPY SIR,âMany of your contributors have given their views on

Mr. Wilson's verbal chastisement of the Member for Smethwick, an incident that does not seem to prove much except that the Prime Minister, when it suits him, can dispense with...

SIR, â Mr. William Thornton's statement that it is 'probably inevitable' that teachers should know 'very little of what goes on in other teachers' class' rooms, and still less...

that motherhood is not the overwhelmingly (and sentimentally) elevating experi - ence it's cracked up to be. Women are supposed conveniently to forget the nastiness of...

LORD DEVLIN'S SPEECH SR,âLord Devlin's memory of his address to

the Winnipeg Press Club on October 16, as outlined in his letter of November 6, is accurate. His remarks were recorded electronically and a transcript gives these two following...

THE SOLDIER'S LOAD From Major-General I. R. Hartwell SIR,-1 feel

it is important to correct the unavoidable impression given in your article 'The War Which Cannot Be Won' that the weight of pack carried by the soldier during jungle operations...

REMEMBERING NEHRU From Earl Mountbatten of Burma SIR,âOn this, the

seventy-fifth anniversary of his birth, I have felt, as the last Viceroy of India, that I should initiate action in this country to com- memorate the memory of the later Prime...

THE MOVEMENT AND THE GROUP SIR,âI feel rather like Princip

the assassin after being beaten up at Sarajevo! Several large boots have been directed at my head, and now I lie in a pool of apostate's blood. The steel-tipped edge of Mr....

WELFARE AND BUREAUCRACY SIR,âThere must be some way of administering

the apparatus of the Welfare State more acceptably than the present system of Civil Service, or government bureaucracy, control. Before the Reformation, what are now broadly...

IN DEFENCE OF PSNOW

Sla,âPerhaps the reviewer of Corridors of Power Would be interested in the following article from The New African Review of Intellect and Culture, retranslated from the...

By CHRISTOPHER BOOKER First, there is the fact that, as the creator of TW3, one of the few real signs of new life in the BBC for two years, Ned Sherrin has been looked to as the...

DENYS LASDUN is an architect who speaks about his buildings with a clarity that builds bridges. Pre- sumably this is one reason why he was chosen to design the National Theatre...

By CHARLES REID Maw is a 'natural.' I am sure he has a clutch of valid operas in his knapsack. But in One Man Show both he and Mr. Jacobs get off rather on the wrong foot. The...

Topkapi. (London Pav- ilion, certificate.)â The War of the Buttons. (Paris-Pullman, 'X' cer- tificate.) Istanbul, where a gang of jewel-thieves com- posed of a...

In White America. (New Arts.)âHe Who Gets Slapped. (Hampstead Theatre Club.) THE theatrical objections to In White America are simple. It is an imitation of a television...

Turner and Sea-Myth By NEVILE WALLIS (NE all subjects none should be more en- trancing to English painters, one would think, than the infinite phases of the sea. As to the...

Political Power : USA/USSR. By Zbigniew Brzezinski and Samuel P. Huntington. (Chatto, 50s.) BRAVE men collect and publish the essays of the dear departed, who are then glad to...

Poetry of the Thirties. Introduced and edited by Robin Skelton. (Penguin, 5s.) IN some ways, the poetry of the 1930s seems even more remote from us than that of the Victorians...

Poetry : Big Gameâ IN this extremely rhetorical and ambitious

essay John Holloway sets out to consider the relation- ship of poetry to contemporary culture. The Lion Hunt of the title refers to the 'marvellous and terrifying work of art'...

All Power to the Soviets!

As Others See Us

She finding on his lips sour champagne, and he on her hair confetti, they enter that eclipse the novels promise. She in his eyes, he in hers, melt as the moon devours the sun....

By JON STALLWORTHY Thistles Half grown before half seen, like urchins in armour double their size they stand their ground boldly, their keen swords out. But the farmer ignores...

THE Vienna of 1931-34 is the setting of John Gunther's novel The Lost City, and the events leading to Nazi domination of Austria form a well-documented background to this story...

By CUSTOS T HE equity share markets are drifting down, as I anticipated, on the realisation that a cor- poration tax means 'double taxation' of dividends and a cut in dividends...

Second Thoughts on the Budget By NICHOLAS DAVENPORT The first idea does not depend simply on mak- ing a show of social justice. Everyone welcomes the higher pensions and...

By LOTHBURY A SUBSTANTIAL rise in dealing profits and addi- tional income received from two acquisitions made last year are mainly responsible for the big increase in pre-tax...

Desert Song By LESLIE ADRIAN But it is most encouraging to observe the way in which the gas industry, at one time apparently indissolubly tied to a clumsy, dirty and increas-...

By MARY HOLLAND Jr may be hard to recog- nise yourself as a tourist in a foreign country. It's even tougher to gather with a group of people who do your job and , realise that...

By ALAN BRIEN â¢ As an avid, engrossed, self-identified reader of Arthur Koestler's auto- biographies, I feel I know him very well. In many ways, he is the modern author I...