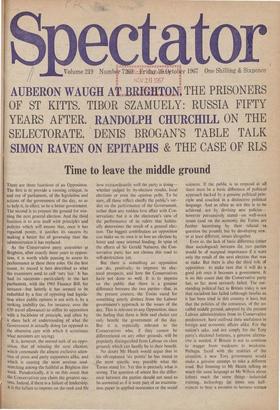 Time to leave the middle ground

There are three functions of an Opposition. The first is to provide a running critique, in and out of parliament, of the legislation and actions of the government of the day, so...

This is an era of agonising choices. The • preservation of beauty and amenity ; or more - houses and more motorways? More safety • on the roads from the drunken driver, or the...

As last year, we are once again conducting a confidential poll of all those attending this week's Conservative party conference. Its purpose is to elicit the opinions of the...

Labour relations were not at their best this week. Lord Carroll, president of the- Agy, said there was 'an accelerating development of peace-time fifth column activity in...

The re-emergence of Reggie

POLITICAL COMMENTARY AUBERON WAUGH Just what is our Reggie up to? In the prevalent mood of disenchantment with Mr Heath it was only to be expected that Maudling' supporters...

JUSTICE DIANA PRIOR-PALMER St Kitts is one of the chain of small islands that form the western boundary of the Carib- bean Sea. Three miles away, across the straight, is Nevis;...

CHRISTOPHER HOLLIS The demand of the Orcadians to join Den- mark, based on promises made by King James III of Scotland, is firmly rejected by the Shet- landers, who, citing...

EUROPE MARC ULLMANN Paris—M Couve de Murville, the French foreign minister, has a distinct edge over most of his ministerial colleagues: he studies the files. It would be an...

THE PRESS DONALD McLACHLAN They are great travellers, our trade union leaders. There is Mr Briginshaw far away in Japan, when he might be expected to be discussing wages with...

The quest for Soviet man

RUSSIA FIFTY YEARS AFTER-1 TIBOR SZAMUELY `Should all progress in Russia be carried out solely by the government, we would present to the world an unprecedented example of a...

CONSUMING INTEREST LESLIE ADRIAN One 'minor disadvantage of 'going European' is that it destroys our Old mnemonics withoui putting new ones in their place: Ever since...

MEDICINE JOHN ROWAN WILSON One of the most important men ih the world died a few weeks ago. This was Gregory Pincus, . the man who developed the contra- ceptive pill. In the...

From the 'Spectator. 19 October, 1867—A curious experiment seems likely to be tried in New Zealand. Mr. MacLean, the Superintendent of Hawkes' Bay, has introduced a Bill into...

TABLE TALK DENIS BROGAN I, like no doubt many thousands of others, have been reading with intense pleasure the second volume of Harold Nicolson's Diaries. On the general merits...

The case of RLS BOOKS

MARTIN SEYMOUR-SMITH Robert Louis Stevenson's posthumous reputa- tion has been a curious and somewhat unfortu- nate one. Within thirty-three years of his death seven collected...

RANDOLPH S. CHURCHILL The Selectorate Peter Paterson (MacGibbon and Kee 42s) Until the early 'fifties the large majority of the safe Conservative seats in England—say 150—...

ALAN ROSS A sunset at first so pale it's hardly there—• Merely a suffusion of pink over sandstone, A faint flushing of the wake— Then the egrets, as exact in formation As...

ART BOOKS FRANCIS WATSON To come across the signature of Bernard Leach among the current artbookware tweaks the antennae. Just so, one feels, did a recent visitor to an...

30s) Gunboats galore PETER FLEMING John Masefield once wrote an adventure- story called `coma'; this title, which baffled a public not yet habituated to the household use of...

Accident: The Death of General Sikorski David Irving (Kimber 45s). Historical who- dunit with a supporting cast which includes Goebbels and Stalin. Much fascinating research...

mum SKIRLING Simon Gray's new play, Wise Child, at Wyqd- ham's, deals with a pretty and suggestive youth • , much given to curling his hair in a handmirror. Jerry divides the...

BALLET CLEMENT CRISP The new ballet season is upon us, with the Royal Ballet opening last week amid the very pretty new paintwork at Covent Garden in its in- escapable Swan...

Star presence PENELOPE HOUSTON The best of Thoroughly Modern Millie is the beginning. Sternly booted feet, beneath a dole- ful grey skirt, creep down a hotel corridor. A...

TELEVISION STUART HOOD Involvement lies at the heart of any good tele- vision programme. The producer, the director, the reporter concerned should be obsessively interested in...

Looking 400 in the face MONEY

NICHOLAS DAVENPORT My heart goes out to John Bull as he builds up his £5,000 portfolio in a high-priced market which is likely, he fears, to crack (though `not seriously') in...

CHRISTOPHER FILDES That economics and fashion go together. is, I think, most clearly shown by the correlation between the hemline and the Financial Times index of ordinary...

What is the Government really after?

BUSINESS VIEWPOINT DAVID BARRAN Mr David Barran is the chairman of The 'Shell' Transport' and Trading Company. Britain's biggest company. He is also the .senior British...

CUSTOS The equity shares markets are still in a down- ward consolidation phase after their recent fantastic rise. The setback is moderate, for good company reports are...

PORTFOLIO JOHN BULL I must at once tackle the question of where to place my uninvested funds. There is no percentage in leaving them with my clearing bank. Interest rates are...

SAVINGS LOTHBURY Savers now have the benefit of a seller's market. There is not enough money to go round, and the price is rising. But prices rise at different times and in...

Sir: I wonder if your newly appointed correspon- dent, Mr Auberon Waugh, might be constrained to reserve his oddities for the features section of the SPECTATOR. His remarks on...

Sir: May a fellow member of the Social Services Group of the Monday Club be permitted to com- ment on Mr Alan Smith's letter (22 September)? It may be true that all parties are...

Sir: Mr Catherwood (13 October) asks whether the prices and incomes policy can face the sharp salary rise needed to pay international rates for our mobile talent. The answer is...

Sir: The tendency to draw misleading conclusions from statistics is

well illustrated by Mr Nigel Vinson's remarkable statement (Letters, 13 Octo- ber) that 'the chance of being killed by a car on the roads today is one seventh the risk it was in...

Sir: One wonders what evidence Auberon Waugh has for his

statement that 'abstentions, on balance, favour the Tory side.' It may be true, but it does not 'go without saying.' In my own home, at a time when the Conservative government...

Sir: Mr Auberon Waugh suggests that we are educating too

many scientists. I would go further and suggest that we are giving higher edu- cation to too many people altogether. Some of the 'rude mechanicals' who have been educated at...

seems to betray some curious and revealing prejudices. For in- stance. 'Many must be killed through the slower reactions of the over-sixty-fives—then why not ban the elderly...

Sir: Christopher Hollis (13 October) alludes, de- li g htfully, to the brevity of Lord Attlee's letters. I think I must have received the shortest one that even he ever wrote. I...

Sir: Lord Attlee's conversation may at times have been laconic,

but there is nothing unpredictable about the example Mr Hollis quotes (13 October). Prizegivings at South Shields, then as now, were held in the early afternoon and the best way...