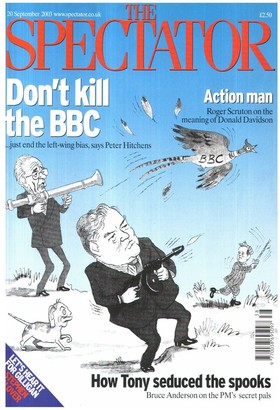 a voicelink to the second round of hearings of the Hutton inquiry into the events surrounding the death of Dr David Kelly, the expert on Iraqi weapons. He said that the...

Unfair to the Third World o appreciate the unique affection enjoyed by the British farmer, it is necessary to look no further than the bumf put out for British Food Fortnight,...

I recently passed into a new decade. With this passing has

come some rather surprising advantages, most of which are of a financial nature. My Senior Railcard, which costs £.18 a year and gives me a discount on all trains, has already...

To all intents and purposes, Theresa May might as well not exist

I was being fed and watered in the House of Lords by a Tory peer some years ago when he registered surprise at the arrival in the room of one of his colleagues. 'I didn't just...

T he rift between Cherie Blair and her former lifestyle guru

Carole Caplin raises a delightful possibility. Should it, as many have speculated, occur to Miss Caplin to write a memoir of her time at No. 10, she will have to find a way out...

Reform the BBC, don't kill it

The BBC is biased, and much of its programming is coarse and crude, but, says Peter Hitchens, it would be profoundly unconservative to privatise it livv hy do I now find that I,...

Nasty, brutish and on credit

Theodore Dalrymple has discovered Britain's spiritual centre, and finds it ugly, aimless and noisy lyv ho says the leisure class is no more? On the contrary, as a recent...

Mother Teresa is on the verge of canonisation, only six years after her death. Anne Sebba on why the Pope is in a hurry to create new saints T ourists in downtown Calcutta (or...

Haringey Domestic Violence Service was set up in 2001 as

a result of a multi-agency review of domestic violence services in the borough. . . . The Equalities and Diversity Unit is looking to appoint an enthusiastic, highly motivated...

My husband, when asked to buy some French beans once, came home with a tin of broad beans produced in France. So I was delighted when he got me a reprint from the Ohio State Law...

go out to work Work experience is more important than a good degree, says Rachel Johnson. That's why trendy offices are full of middle-class teenagers S o how many did you get...

The truth about meaning

Roger Scruton on the importance of Donald Davidson, the analytical philosopher who died on 30 August T here is a certain tradition in American philosophy that combines logical...

Bruce Anderson reveals the steps by which the intelligence services succumbed to the magnetic charm of Tony Blair T HE conventions of secrecy were maintained. Only , Richard...

Sven Goran Eriksson and David Beckham have launched a charity to brin g about world peace throu g h football, with Mr Beckham's immortal words: 'I think my advice to any...

1 n the scrubby Languedoc they used to make some

terrible wine, which only the French convinced that theirs is the best, while everyone else produces mere alcoholic grape juice could enjoy or even drink. That's changed....

Ross Clark says Peeping Tom has replaced Big Brother as the chief threat to our freedom. We should stop filling in questionnaires I occasionally worry that future scholars will...

Commentators are expressing shock at the Hutton inquiry's 'revelation' that Tony Blair consults a private cabal of chums about policy. Excuse the Roman historian while he...

Why all the hatred for Andrew Gilligan?

His story was essentially correct I t strikes me. as I follow the Hutton inquiry, that almost any human activity can be made to appear questionable, even dodgy. I think of my —...

The BBC has its faults, but the charge of political bias is hopelessly outdated

A decade or so ago, the ITN newsreader Sandy Gall could be seen scampering about the mountains of western Peshawar wearing on his head one of those ornate and inescapably...

From Dr Robin Moffat Sir: Your excellent leader (`Rape and justice', 13 September) rightly states that many accused men need protection from being publicly branded as rapists...

From Francis Bennion Sir: In his article on the government's Sexual Offences Bill (I was 12, she was 13', 13 September), Rod Liddle writes, 'The courts will be left to decide...

The sword of Islam

From Gerald Orman Sir: Charles Moore (Politics, 13 September) is quite right to be frightened by Islam, but his reason, that 'in its current form [it] does not appear to have a...

From John Jenkins Sir: Theodore Dalrymple (second opinion, 30 August) may remember his visit to the Strand Hotel in Rangoon under the SLORC (it was 'Restoration' not...

Too kind to Mussolini

From Richard Bowen Sir: I am glad to hear that Nicholas Farrell has fallen in with those Nazi/Fascist skinheads who behave themselves (Diary, 13 September), but there are...

His party, right or wrong

From Mark Taha • Sir: I entirely share Leo McKinstry's opinion of Roy Hattersley (`I prefer the tub of lard', 13 September). To me, he's an old Labour hack whose claim to...

From John Kinsman Sir: Peter Jones's column on the justifications for suicide (Ancient & modern, 13 September) implies that Dr David Kelly's suicide may have been a result of...

From Mike Smith Sir: In his essay 'Breaking the butterfly. (30 August) Paul Johnson speculated that one of the first butterfly paintings was done by a Frenchman in the 16th...

From W. Oise Sir: Regarding the article by Paul Michael Wihbey about the Alberta oil sands (`The end of the affair', 6 September), the proven reserves are immense, but the...

From Professor Katarina Tomasevski Sir: My attention has been drawn to Ross Clark's Banned wagon of 26 July. His text used a wrong title in inverted commas. I am not 'special...

From Franz Metzger Sir: What Andrew Gimson writes ('A sad case of schadenfreude', 13 September) is correct, but you managed to turn what could have been a balanced report into a...

The Iraq blunder will make Americans say, 'Never again!' And that's a pity

A charge should be laid at the door of those who urged America onward into Iraq this year, and it should come not from pacifists, United Nations groupies or Uncle Sam-baiters,...

Body artists may be the Michelangelos of the 22nd century

N ow that my huge book Art: a New Histoty is in the shops, the serious part of my professional life has come to an end, and my mood is elegiac. This book, which goes from the...

No one will ask us to vote on the euro after a, we might say No

lyv ell, plucky little Sweden, Its proud people were not too proud to take my advice. Rasta Nej, I told them, and they did, voting No to the euro sufficiently early and often to...

Strands of truth in a morass of chaos

Hidden turmoil of a teetering acrobat

The benign neglect of the metropolis

How the ballerinas were sent to battle

The real Duke of Omnium?

A nose for the needy

Deeper into a moral quagmire

Faulty connections and plenty of shocks

When revenge is sweet

Bill Alexander on why he is directing the RSC's new production of Titus Andronicus T he Elizabethans must have had a completely different attitude to physical violence. For a...

Roderic Dunnett The Ruralists: A Celebration of Three Decades Welsh Museum of Modem Art, Machynlleth, until 1 November I t was Laurie Lee, the author of Cider with Rosie, who...

Puzzled by the Don

On love and death

Mark S teyn eni Riefenstahl was a brilliant cine atographer and editor who could compose and edit anything, except, in the end, her own life. If only she'd been able to snip...

Balm for the soul

Charles Spencer W hen 'Olden but golden' began two years ago, I described Gene Clark's No Other (1974) as my current, all-time favourite album, After the column appeared, the...

Michael Vestey T often ask myself what it is about Italy that so attracts the English. There are several obvious answers: the art and architecture, the weather, the food. I...

Cooking up a wheeze

Simon Hoggart rr he cookery programmes are back, though when you settle down in front of them with your takeaway pizza or pot noodle, you'll notice they're changed. They're no...

Alan Judd I fa spare £110,000 is burning a hole in your pocket, you'll have to wait a bit before you blow it on the new Bentley GT coupe, since they have more orders than cars...

Robin Oakley A t only 42, the amiable face of / - 1.Southwell trainer Paul Blockley carries a weight of experience. Though he doesn't fuss about it, there have been knocks...

In times of conflict

Taki A n email from Sir Roger Moore concerningcerning two prominent Hollywood Hungarians whom I failed to mention last week. Did you know that Bernie Schwartz, aka Tony Curtis,...

Jeremy Clarke I spent last week in south Wales, staying in a cottage near the coast. On the second evening we walked to the local pub to see what it was like. We went across...

Petronella Wyatt A t dinner the other night in Washington I was sitting next to Robert Redford. Actually, this is a slight fib. I was in a restaurant called Nora's — which,...

A game for all seasons

MICHAEL HENDERSON T his is the week in sport when summer officially gives way to autumn. The cricket season ends and the football season rumbles on, relentlessly, mercilessly,...

Q. While staying in Provence recently, as the guest of

some friends from Suffolk, my host, albeit an Englishman to his core, appeared every evening in a different pair of monogrammed velvet slippers (stags rampant on coronets, HS...

Q. Can you define the space that my theatre ticket

reserves for my personal use? I'd say that it extends from the back of the seat in front to the back of my own seat in one direction, and to half of the arm-rest in the other....

Q. I have been virtually forbidden to touch alcohol on

medical grounds. I am rather at a loss as to which direction to turn since I intensely dislike Coca-Cola and allied highcaffeine concoctions. What should I do? Name and address...