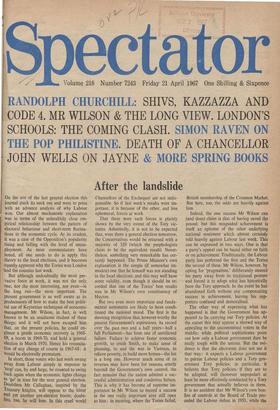 On the eve of the last general election this journal stuck its neck out and went to press with an advance analysis of why Labour won. Our almost mechanistic explanation was in...

Mr Wilson and the long view

POLITICAL COMMENTARY ALAN WATKINS 'Harold,' observed one Labour MP, 'has kept - the floating voters. It's only the Labour sup- potters - who stayed away.' The speaker was a...

DAVID ROGERS LONDON'S SCHOOLS At the champagne party held at County Hall on Monday night by the eighty-two victorious cLc Conservative councillors the main topic of...

CHRISTOPHER HOLLIS Macbeth—not MacBird- One has commonly heard, Did his master to death. So they say of Macbeth. But Miss Barbara Garson, Contriving a farce on The Tale of...

LATIN AMERICA MALCOLM RUTHERFORD The most curious fact about the meeting of American presidents which has just ended in Uruguay is that it was called by Lyndon John- son...

THE LAW R. A. CLINE Something like seven years have passed since it: was first suggested in this •column that the time of the High Court judges could be better employed than it...

Death of a Chancellor

D. C. WATT Dr Konrad Adenauer was not the kind of German to win very great appreciation in Britain. British opinion is always prone to judge foreign statesmen by the degree of...

J. W. M. THOMPSON Cultural festivals do not ordinarily stir me greatly: they tend to move a little too close to the packaging business for my comfort. Still, on Sunday the sun...

From the 'Spectator.' 20 April 1867—It is quite right, we suppose, to sell our wooden ships, if they are useless, but it is quite right also to get a good price for them. The...

TELEVISION STUART HOOD I have a terrible confession to make. In the days when I was a BBC executive I was asked whether The Forsyte Saga would be a good idea for a serial. I...

THE PRESS DONALD McLACHLAN Normally, there is little profit or amusement in comparing the treatment given by various edi- tors to one subject. But the PE.P survey of race...

PERSONAL COLUMN SIMON RAVEN A middle-aged and exceedingly left-wing acquaintance - of mine recently attended .- a Ladies' Night at a Cambridge college. 'The whole thing was...

C. B. COX The circus is in town,' sings Bob Dylan at the beginning of one of his best-known songs, and then he scornfully parades before us a macabre group of characters—Cain...

ANTHONY BURGESS May We Borrow Your Husband? and other comedies of the sexual life by Graham Greene (Bodley Head 21s) Mr Greene, who, being a great writer, is also a modest...

Metamorphosis of a book

DESMOND DONNELLY, MP The Life and Time of Ernest Bevin Volume II Alan Bullock (Heinemann 63s) When war came, Ernest Bevin was on the point of retirement. He had behind him a...

The torches of Florence

ANDREI VOZNESENSKY The American poet William Jay Smith has translated The Torches of Florence,' in col- laboration with Max Hayward, for a collection of Voznesensky's poetry in...

JOHN ROWAN WILSON An Analysis of Human Sexual Response edited by Ruth and Edward Brecher (Deutsch 42s) It is now nearly twenty years since Dr Kinsey surprised the world with...

ROBERT BLAKE Pollbooks: How Victorians Voted J. R. Vincent (CUP 55s) It is hard enough to find out why voters vote as they do today. The correlation between the social...

Prints of the Japanese buskin ARTS

A ITT BRYAN ROBERTSON The current interest of artists, abstract or figurative, in objects as devices and in their deadpan exploration, is matched by the films I mentioned last...

CUSTOS The new account opened on the Stock Ex- change with a firm tone in the gilt-edged market and a slightly better feeling in the equity share markets. The latter was due,...

NICHOLAS DAVENPORT Behind the scenes of our daily life a gold drama is being played which is as incompre- hensible to most people as the Japanese Noh Theatre. This is...

CONSUMING INTEREST LESLIE ADRIAN While we await the opinion of the learned judge as to whether fortified wines not made in Jerez de la Frontera may be dignified by the name of...

Sir: Mr Ivor Richard's reply (7 April) to Mr Powell's article is a splendid illustration of the weakness of the official strategic doctrine. His con- tention that 'nuclear...

Sir: There is surely a great difference between lik- ing Christianity as history and believing its pro- positions to be true (Michael W. D. White's letter, 14 April). Unless, of...

Sir: The two well written letters in the SPECTATOR of 14 April interest me very much. One is written by a man who claims he spent a few days in Brix- ton Prison four years ago....

Sir: May I comment on Mr Donald McLachlan's remarks about the Peter Simple column (14 April)? Dewing the ten years I have been concerned with this column—four years in...

Sir: Your correspondent C. R. A. Swynnerton (14 April) writes about my article on Turkey as one might expect from those who take a simple view of politics and assume a...

The language of politics

JOHN WELLS . 'I just love that great big smile of his. Is it really true that he's a bachelor? Mmm, I really go for him.' (Miss Jayne Mansfield, quoted in the Daily Express,...

Getting out of Aden

Sir: If Aden is to have genuine independence the British withdrawal must coincide with Egyptian withdrawal from the Yemen. To settle for less than this is to hand the area to...

Sir: Some of your contemporaries appear from recent comments to be considerably more worried about the future of the SPECTATOR than you are, judging from your recent note on the...

A letter to my son Sir: As a regular reader

of the SPECTATOR, Mr Simon Raven's satirical letter to his son and the deluge of criticism it unleashed interested me. So intensely disagreeable must have been the theme of the...