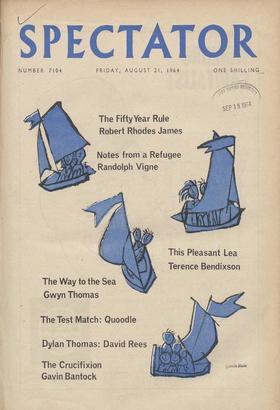 A CORRESPONDENT in last week's Church Times concludes his letter : This is a northern industrial parish. The churchgoers are few, the smells are horrid, the problems immense....

Portrait of the Week--

'THE RIDDLE OF WILSON'S vanished friends' was the leading press headline of the week, with one of the Great Train Robbers disappearing into thin air with twenty-nine and a half...

SARA!! GAINIIAM writes from Bonn: Some months ago, a well-known CDU poli- tician said to me that it was up to the British to deal with the Cyprus situation, and from his...

The View from the UN

ARNOLD VAS DIAS writes from New York: The thirty-eighth floor of the UN Secretariat building, where the Secretary-General and his group of close advisers follow the Cyprus...

AARON SEGAL writes from Nairobi: The Kenya Government has firmly com- mitted itself to economic development through encouragement of the private sector. Since by African...

Colourful Autumn By RANDOLPH S. CHURCHILL I looks like being a colourful autumn in 'Fleet Street. The colours will not all be gay; there will be some autumn tints. The...

MURRAY KEMPTON writes from Hershey, Pa: Senator Goldwater innvited those Republi- cans who represent his party's past and present to come here last week and pledge him...

By RANDOL PH VIGNE (Mr. Vigne arrived in England on August 13, having escaped arrest and a banning and con- fining order in South Africa, where the police were searching for...

By ROBERT RHODES JAMES I is evident that a deliberate and carefully 'planned assault is being prepared on the official restrictions covering the inspection of documents in...

By GAVIN BANTOCK (The following extracts are from Mr. Bantock's much longer poem, for which he was awarded the Hillary Memorial Prize for 1964. The prize is worth MOO and was •...

The Way to the Sea By GWYN THOMAS VEN now the rattle of a train means just one thing to me. It is the bizarrely entranced day each summer when we valley children poured in...

From BERTRAND DE JOUNENEL PARIS I N the language of bureaucracy, a Frenchman is un administre. The word, which came into use at the beginning of the last century, is not...

The Rate for the Blob

BY CHRISTOPHER HOLLIS Mr. Ted Dexter has repeated the opinion which he first expressed eighteen months ago in Australia, that the best way to get results in Test Matches...

more than one can say of the rest of the match, or indeed of the series. The rain that washed away the fifth day's cricket was in retrospect the right ending. When the...

I can only think of one real plus to English cricket from this season. Boycott has made his place secure, and looks like holding it for a long time. Barber looked short of...

The Gentle Rain The Australian innings was in its own

way as efficient and as dull as in the Manchester Test. Long before stumps on Friday one could almost hear Simpson calculating his dreary sum: 'A lead of over one hundred and...

A Spectator at the Oval

S a sucker for sentiment, a lover of cricket, .0b,a firm believer in happy endings, and as honorary organising secretary of the Frederick Sewards Trueman fan club, I was feeling...

SIR,—As one who has worked for the greater part of his ordained life in parts of the Anglican Com- munion where it is not the established Church, I should like to underline one...

SIR,—What exactly is James Tucker bitching about in his piece

on the Eisteddfod? Is it simply that he doesn't understand what's going on behind all those cowls and goloshes, or is he, in spite of his petulant incoherence, seriously...

SIR,—Could Gillian Hawtin kindly give,, 'chapter and verse' for •the

'money' Parliament provides' for the upkeep Of the Church of 'England? I cannot recollect* any ocCasion on which the Chancellor has made stich 'provision in his annual Budget....

SIR,—in a month of solemn memories, the corre- spondence following

the Bishop of Southwark's article seems strangely naive. For centuries the mausoleums of the Anglican Establishment have stood—pathetically, perhaps—for. the prologue to St....

SIR, —No money is voted by Parliament to defray the

expenses of the established Church. Its members, through direct giving, provide some twenty-Iwo million pounds per annum. This is in 'addition to the income of approximately...

Sm.—Your contributors to correspondence on 'Up- holding the Establishment' (August

14) well revealed the illogicalities in the arguments of that most muddled of men, the Bishop of Southwark, a South Bank ecclesiastic who hardly knows whether he is on the banks...

• our view the.' most workable solution is partition' (last

week's , editorial). - Before your other readers make up their minds,. I. hope you will let thern:consider the disadvantage of partition: . , 1. There are, I understand, no...

SIR,—We were exhilarated to read your leader 'The Outsiders' as

we think this is the first occasion on which a serious journal has pinpointed the crucial problem that faces the development of British in- dustry in the decades ahead. This...

SiasYou mention in 'Spectator's Notebook (August 14) that the South

African Postmaster- General was stung into a denial of your assertion of the previous week that some of your mail from South Africa had been interfered with. . The...

WHAT WILL JONES SWALLOW?

SIR,—After enjoying last Christmas the rare pleasure' of listening to Mr. Henry Fairlie opening a sale of work in his ancestral Nonconformist chapel, was interested to sec him...

SOUTH AFRICA seems to be necessary to make one thing

quite clear to your readers who have followed the correspondence on the advisability or otherwise of applying international sanctions against South Africa. In spite of the...

THE OUTSIDERS SLR, — As one of the unfortunate shareholders of Rolls

Razor, I find it difficult to share your enthu- siasm for the initiative and cfliciency (?!) of John Bloom which have enabled many households to acquire washing machines at an...

SIR,—You make a statement in your editorial (Spectator, August 14)

which seems to me highly dubious: 'It is futile to blame Makarios for the present situation in Cyprus.' But then you seem to contradict yourself by later admitting that,...

By TERENCE BEND1XSON Not that this matters. The point is they are there. They are the vanguard of a tide of city dwellers who are going to have more and more time to do as they...

SIR,—Simon Raven in his review of Mr. Mont- gomery Hyde's

History of Pornography writes, 'As Mt'. Montgomery Hyde points out, it [an amiable attitude towards sex] was the standard attitude of all educated men until St. Paul and the...

SI R> --- Surely Quoodle has missed the point in his er,iticisms of

the Guardian and its attitude to the U nited States. There are a great many people in was country who are tired and frightened by the American habit of gambling with our lives...

orthodox Christians owe a great debt of gratitude to Mr.

Henry Fairlie for his excellent article `What Will Jones Swallow?' A real debt of gratitude is also due to the Editor of the Spectator for printing this. Bishops have all...

By HUMPHREY LYTTELTON The latest intrepid explorer to try is Joachim Berendt, an intelligent, knowledgeable ,and methodical jazz critic from Germany. His book, The New Jazz...

Two of the symphony's five movements—the opening Adagio and the third (`Purgatorio')— needed little attention or none at all, having been wholly orchestrated, or almost so, by...

THE life-cycle of the Ballet Rambert reaches its period of gestation each year during its brief an- nual season at the Sadler's Wells . Theatre. Still denied a permanent tent of...

By IAN CAMERON SOMETIMES, in weeks when the movies aren't so good, critics find themselves pondering the cinema's conventions. The favourite is, of course, the tackiest of them...

Windy Boy and a Bit By DAVID REES H is wisdom was the perception of joy,' John Malcolm Brinnin has written of his subject in Dylan Thomas in America, '—an insight so...

A History of Chinese Literature. By Lai Ming. With a preface by Lin Yutang. (Cassell, 42s.) ONE afternoon in the autumn of 1934 I went and had tea in Cambridge with the first...

THE blurb of Anais Nin's new book repeats what various critics have written in the past about her work : Edmund Wilson has called her 'a very great artist' and Rebecca West has...

The Reminiscences and Recollections of Captain Gronow. Abridged and with an intro- duction by John Raymond. (The Bodley Head, 50s.) WAS there really a Pig-faced Lady,...

Industrial Progress in Poland, Czechoslovakia, and East Germany 1937-1962. By Alfred Zauberman. (Published for Royal Institute of International Affairs by O.U.P., 50s.) The...

IMF Prevarications B y NICHOLAS DAVENPORT Is it really necessary for the Finance Ministers of the Western bloc to fly round the world to attend meetings of the World Bank and...

By LOTHBURY O wit the past few years the Avana, Group has expanded its profits by the infusion of new money by way of rights issues. It seems it is still intent on expansion by...

Underground Movements By LESLIE ADRIAN About half a century ago it was realised that the big answer to a big city's circulation lay underground and,. as a result, London has...

Custos is on holiday.

Whether Dogs Can Fly By STR1X FROM now until after Christmas—in other words, during the shooting season —the number of persons who wish to travel from one point in the United...

By ALAN BRIEN The sumptuary laws, which prevented appren- tices and servingmen disguising themselves as gentlemen and gentlemen togging up as nobles, were expected to apply to...