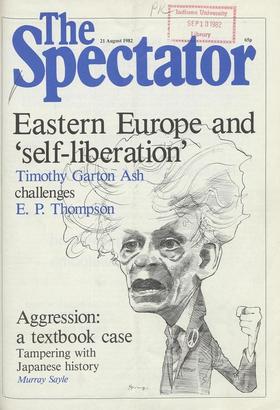 A greement seemed at last to have been reached for the withdrawal of members of the Palestine Liberation Organisation from Lebanon. The US mediator, Mr Habib, expected their...

Thoughts for the summer Jo Grimond T he silly season in the press and television fills most of the year now. It used to be confined to late July and August and described the...

T he 10th Earl of Tankerville is selling Chillingham Castle and the famous Wild white cattle which live within the wall- ed park. This is sad. The cattle, which can be savagely...

Meditations on St Lawrence A uberon Waugh Montmaur, Aude T hrough the heat and smoke of St Lawrence's martyrdom, over 1,600 years ago, three important truths emerge which might...

Murray Sayle A ny casual visitor to Japan these days (the rare, better-informed Spectator readers excepted) could easily be forgiven for concluding that preparations for World...

A fault on the supply side

The myth of 'self-liberation'

An open letter to E. P. Thompson D ear Edward Thompson, Over the last two years I have watch- ed with fascination the successive launches of your personal peace barrage. First,...

Richard West Stamford, Lincolnshire A plaque on a house in Stamford says: 'Here lived Lady Frances Wingfield who, claiming relationship with Oliver Cromwell, persuaded him in...

Confessions of a bookseller

John Chancellor M y brother, the editor, has asked me to write an article on antiquarian book- selling. He has done this, of course, mainly out of a desire to help an elder...

Alan Gibson T he Indians were a good side, without the bowling likely to get England out twice in a match. Still, they batted attrac- tively when the weather let them, and it...

Non-story Paul Johnson hortly before we went on the air for last L./ Sunday's live Face the Press pro- gramme, James Prior, the Northern Ireland Secretary, remarked that...

Parliament adjourned yesterday till 24 October, when the House of Com- mons (the Lords may probably not as- semble unless foreign affairs require attention) meets to deal with...

London's strength Tony Rudd T he strain of the world's developing financial crisis is showing up wherever there is a latent weakness in the system. It is a time for living in...

Sir: Richard West pokes fun, in his article 'No third world feminists' (7 August), at Western feminists with 'their crackpot ideologies' by drawing comparisons with the...

Sir: Patrick Desmond (14 August) says that Menachem Begin is 'a terrorist' in 'the classic European sense of one who believes in "the propaganda of the deed" '. This is a common...

Waiting for Ullsten Sir: Andrew Brown, in his report 'The Assyrians in Sweden' (7 August), suggests that Swedes believe the English to be `quarrelsome, bone-idle and...

Sir: As a New Yorker who constantly yearns for all American meals, I was pleas- ed that our breakfasts found favour with Simon Courtauld (Notebook, 7 August). 1 think it only...

well be right that pampered Western feminists are naive and imperialist when they try to foist their views on the third world. But isn't he being a little pampered himself when...

In the name of sport

Sir: Richard Course is quite right (Letters , 14 August). Certain myths surrounding fox- hunting should be exposed. May we start, with the one propounded by his League. That is...

Mary Kenny T here are fashions in social history as in everything else, and the present fashion concerning the history of the family is to claim that, until modern times,...

Hugh Massingberd The Man who was Vogue Caroline Seebohm (Weidenfeld & Nicolson £12.50) H ard on the heels of the recent life of Clare Boothe Luce comes another American...

Hugh Lawson Tancred I t is always appropriate for a people like the British, who are abnormally prone to imagine that the solution to their economic — and other — problems can...

Miranda Seymour Close the Door Behind You Ray Salisbury (Andre Deutsch £7.95) D rucker is, to say the least of it, an unusual man. A highly successful economist and management...

Edinburgh Festival time Allan Massie evertheless' is a great Scottish word. Muriel Spark once skid she became a Catholic on the 'nevertheless' principle, and she writes her...

Blue-pencilled John McEwen G iorgio de Chirico died in 1978 at the age of 90 and now, in the usual museun i way, along comes his memorial exhibitio n (Tate Gallery till 3...

Island story Mark Amory The Tempest (Stratford) Moliere (The Other Place, Stratford) T he Tempest tends to get poor reviews partly because the lines suggest an island so...

Forgotten images Peter Ackroyd T he Armenian film-maker, Sarkis Parad- janov, was by all accounts considered in his early years to be nothing more than a gifted trifler. And...

Rambling Jeffrey Bernard H elp! Help! I'm drowning in memorabilia. I want to jump into to- morrow but how big is the drop the other side of midnight? I'm sorry to go on about...

List to starboard 7 'aki Spetsai I t is no longer up to Mrs Thatcher and the generals. Peace was declared this week at Aegean conference. There were high ' el talks, and even...

Jaspistos reports: Competitors were asked for a poem in the form of a curse called down by a customer on the head of someone providing bad service. What sparked me to set this...

No. 1232: Selling the Bard Set by Jacomo: Since Hamlet is the name of a cigar, why not Lady Macbeth soap or Gloucester parachutes? You are invited to compose an entertaining...

Smiles Raymond Keene T ony Miles has, at last, broken the hex Which in the past always seemed to af- flict his form in the British Championship. His final score of 9 points...

A prize of ten pounds will be awarded for the first correct solution Opened on 6 September. Entries to: Crossword 571, The Spectator, 56 Doughty Street, London WC1N 2LL. 1...