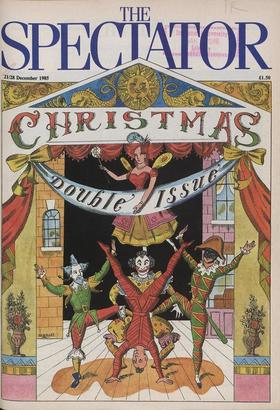 THE STRANGE STORY Perhaps in 50 or 100 years' time, when ignorance is more complete, it will be easier once again to Interest people in the story of Christmas. Corning to it...

The three wise social workers I n South Africa, six whites were killed and five others wounded when their truck was blown up by a land-mine close to the Zimbabwean border. The...

A Tale of Two Inner Cities FERDINAND MOUNT I 'm Oliver Twist's new case worker. Oliver, I have come to take you back into care.' `Yes, Miss.' Oliver looked in awe at this...

PEREGRINE WORSTHORNE A bout 20 years ago, I took Andrew Knight, who was then just starting on the Economist, to stay with Claud Cockburn in Youghal and as we drove away the...

Runcieballs revisited, or what to do with the Beveridge boys AUBERON WAUGH SIR William Beveridge would be 106 if he were alive today. This month, which marks the 43rd...

THE WIDOW AQUINO TAKES ON MARCOS

- Brian Eads on the battle between insurgent left-wingers and a repressive state, which makes the Philippines' coming elections unpredictable Manila THE award-winning novelist...

Hal Colebatch finds that horrifying mutilation has been re-introduced among Aborigines TWO young Aborigines aged 15 and 22 hitch-hiked out of the West Australian desert...

Richard West on the Nicaraguans' perilous passion for explosions Leon THE Nicaraguan national character might be described as explosive. Last week I related (`Murder outside the...

Michael Fry on the rise of laissez-faire economics in France TO ALL appearances, free-market econo- mics are taking France by storm. Their champions, clothing often really...

Christopher Hitchens on the fictional origin of an African nationalist name RETURNING from South Africa a few years ago, I wrote a comment about the adoption, by the More...

Zenga Longmore on the way South Africans entertain black tourists WHENEVER a white person deigned to speak to me in Harare, I knew he or she must be South African and not...

The wealth of the late Mr Vanderbilt proved to be even greater than we had anticipated. We suggested thirty-five millions sterling; but it appears that in the eight years which...

Outsider: A profile of Nicolas Downie, desert fighter and film-maker NICOLAS Downie's curriculum vitae would not easily find a designated pigeon- hole at his neighbourhood Job...

MIRAB ILIS The press: Paul Johnson on the amazing decline of union power THIS has been the most remarkable year for Fleet Street in decades, and 1986 promises to be even more...

On the record Who, this year, said: 1 do not even know what an ouija board is.' 2 (To Bob Geldof) 'I have executed people who plotted a coup against me, but I do not use...

THERE has been a lot of talk recently about statues

moving. Well, they do. I. know because I once spent Christmas in a niche. I had been shopping yet again on the endless Christmas round and I stopped at our local church, for a...

Take out a year's subscription . , --- to The Spectator and we will send you free Alan Watkins's `BRIEF LIVES' (worth 18.95). WU In its acerbic, witty and highly revealing...

A. M. Daniels finds what life is like for foreigners in a Bolivian jail La Paz THE gringo prisoners in San Pedro jail in La Paz, says The South American Hand- book, would...

Sir: Jock Bruce-Gardyne is an exchange rate watcher, when it comes to evaluating monetary conditions. He is even one of the band in the City and Whitehall that is pressing the...

Sir: Byron Rogers is very kind to me in your Christmas Books section (7 Decem- ber), but he is not quite kind enough to publishers. I was ill, but I am now writing again, and my...

Sir: I am truly grateful for Andrew Gim- son's article, 'Can women be priests?' (23 November). A layman of the Church of England, I also have 'huge reasons to say no'. It was...

Sir: I should like to comment on the `nightmare quality' of such sneery articles on women's magazines as Digby Ander- son's CA pinch of ground glass', 14 De- cember). They...

COOPED UP IN CARAVANS

Roy Kerridge on his visits to Venus and Levi, self-seeker and gypsy ON A cold, rainy winter's day it is pleasant to take refuge from the weather in a friend's caravan. If a...

Jeremy Lewis on the touchingly comic atmosphere of respectable lodgings AMONG the many agreeable features of English films made in the 1930s are those scenes set in...

architectural defects which might mar a childhood WRITING of that triumph of the miniatur- isation of doniestic architecture, the Queen's Dolls' House at Windsor Castle, A. C....

Ian Deary and Simon Wessely have discovered that the Prime Minister is remembered by lunatics THERE are very few laws in psychology and it is not easy to break them. We have...

PRESENTS FROM THE UPPER CLASS

Simon Blow on the reluctance of the rich to splash out STRUGGLING through a crowded Lon- don department store the other day, set me thinking about the attitudes of those who...

FOR WHAT WE ARE ABOUT TO PERCEIVE

Sebastian Faulks on a new abuse of language, afflicting even the otherwise literate EVERY now and then a word is misused so badly that it becomes a major public hazard. We all...

Fantasies on the road south Colin Welch A VISIT TO GERMANY, ITALY AND MALTA, 1840 - 1841 by Hans Christian Andersen translated by Grace Thornton Peter Owen, £12.50 A peculiar...

Inner cities but no real centre

Laura, the Sword of Damocles

Harriet Waugh MEN AND ANGELS by Mary Gordon Cape, f8.95 M ary Gordon's third novel Men and Angels is about love, duty, compromise and failure in love and the consequences...

Hugh Cecil THE LAUGHTER AND THE URN: THE LIFE OF REX WHISTLER by Laurence Whistler Weidenfeld & Nicotson, £14.95 R ex Whistler was one of the most versatile British artists...

YOUNG WRITER AWARDS i Following the success of last year's competition, The Spectator announces the launch of its second Young Writer Awards. These important Awards provide...

A crucial aspect of the past restored

To have believed the impossible to imagine! A god who turned himself into a son And implanted himself on our planet to rescue us: So ludicrous a dream, so grandiose Could not...

As I move, through autumn to winter, my life's house Is Edmund Waller's cottage of the soul. How chill, how pure, eternity shines through the chinks! Yet, while my fire still...

One and one make only just enough

Max Hastings SOMERVILLE AND ROSS: THE WORLD OF THE IRISH RM by Gifford Lewis Viking, £12.95 T he English conviction that the Irish are liars is founded upon our false expecta-...

Thorpe `too close' to MacMillan

Jann Parry KENNETH MACMILLAN: THE MAN AND THE BALLETS by Edward Thorpe Hamish Hamilton, f14.95 T here is no shortage of choreographers in the world: only of good...

I looked up the first page of A Question of Upbringing to remind myself of how it all started: the workmen warming their hands round the brazier, leading on to the thought of...

t is a great pleasure to write about Anthony Powell,

whether as man or au- thor. I knew him first as my fag at Eton. We met again later when we were both grown up and became life-long friends. If I remember rightly, he was an...

A nthony Powell was on Malcolm Muggeridge's Punch in the mid-Fifties.

I did small drawings and the occasional piece for them. Muggeridge was the first editor I met, though not the last, who preferred reading his magazine after publication. Anthony...

A quiz to The Music of Time

A buried love: Flecker and Beazley

The cream of the carol Peter Phillips Things are seldom what they seem, Skim milk masquerades as cream (W. S. Gilbert) I t is surely unfair to equate such splendid Christmas...

Don Giovanni (Coliseum) Ifs and buts Rodney Milnes A mong the many interesting things .about Jonathan Miller's new production of Don Giovanni have been reactions to it. It...

The Scarlet Pimpernel (Her Majesty's) Dracula (Lyric Hammersmith) Blood- Christopher Edwards W herever the theatre critic turns, at this time of year, there appear yet more...

The awards Peter Ackroyd 0 nce again it is that very special time of year, when all those cinema critics associated with the Spectator gather round to select the 'highs' and...

Remembered presents Giles Auty S weeping my garden last June I found the remains of a swallow-tailed butterfly. How rare such a discovery is these days, within a dozen miles of...

Boudoir bedeck'd Charles Campbell D ick Dives has had a bad year. His daughter has taken up a religion, which, while encouraging self-denial in its neophytes, manages to...

Parasites with personality Ursula Buchan ormally, Christmas trees come with all the designed, built-in obsolescence commonly associated with electric light bulbs. In the...

Christmases past Taki A s everyone who has spent Christmas in Beverly Hills, Acapulco or St Moritz knows, the grander the Yule party, the nouveau-er the host. There is no...

Programmed responses Alexander Chancellor H itherto, I believe, it has been the policy of the BBC to invite on to Sir Robin Day's Question Time only people regarded as...

Artful dodging Jeffrey Bernard T he Russians have got a lot going for them. In August the tank crew who sold their tank for two cases of vodka became immortal but were...

Enforced cohabitation P. J. Kavanagh P resumably, most of us dislike killing things. The occasional mosquito perhaps, in self-defence, but on the whole it makes us feel better...

Private hell Jaspistos I n Competition No. 1400 you were asked to describe your personal idea of hell, in prose or verse. Sydney Smith's acquaintance whose no- tion of heaven...

Eponymous Raymond Keene N ews of the world championship, Montpellier and Lucerne has crowded out coverage of one of the most important tournament of 1985, the Nimzowitsch...

:400/LORL2 J 1 ° 3 1„. THIS week's column is addressed not to regular cooks but those husbands who rarely work in kitchens but who would help their 'busy' spouses at...

Amazingly, this is the first time I have asked for them. Competitors are limited to three each, and they must be about living people. Entries to 'Competition No. 1403' by 10...

Party pieces by Mass A first prize of £60 and two further prizes of £25 will be awarded for the first three correct solutions opened on 13 January. Entries to: Christmas Jumbo,...

PORT has traditionally been regarded as a quintessentially masculine drink: this view was ratified by Dr Johnson's remark that `Claret is the liquor for boys, port for men'...