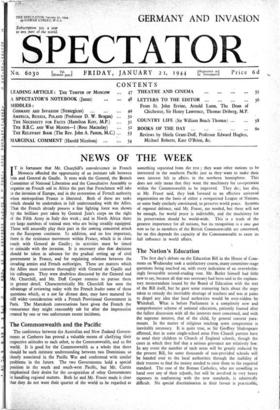 The first day's debate on the Education Bill in the House of Com- mons on Wednesday took a satisfactory course, many committee-stage questions being touched on, with every...

I T is fortunate that Mr. Churchill's convalescence in French Morocco afforded the opportunity of an intimate talk between him and General de Gaulle. It rests with the General,...

The Commonwealth and the Pacific

The conference between the Australian and New Zealand Govern- ments at Canberra has proved a valuable means of clarifying their respective attitudes to each other, to the...

Professor Bowley is doubtless right in saying that the amount of time lost by strikes during the war is far less than might have been supposed from the publicity given to it....

The Archbishop of Westminster

The splendour of the elaborate ritual which accompanied the en- thronement of Dr. Bernard Griffin as sixth Archbishop of West- minster was in contrast with the homeliness of his...

The Statesmanship of Mr. Cosgrave

For reasons of health Mr. W. T. Cosgrave has retired from the leadership of the party which forms the principal opposition in the Dail, and which supported him during the ten...

Too little attention has been paid in this country to the remark- able speech delivered last week in New York by Mr. Earl Browder, the leader of the American Communist Party,...

The Farmers and the Government

The action of the National Farmers' Union in appealing to the Prime Minister over the head of the Minister for Agriculture on the eve of a debate on the whole question of...

THE TEMPER OF MOSCOW

HE most deplorable aspect of the latest Russian statement regarding Poland is the effect it may have not on Russo-Polish but on Russo-British and Russo-American relations. On...

is no doubt folly for me to attempt to comment on him. Yet his characteristically dramatic reappearance in this country and in the House of Commons cannot go unsignalised. It...

By -STRATEGICUS but we cannot trust these reports ; and there are others that may be more reliable in the broad, but are equally unworthy of credence in the colour that is...

By D. W. BROGAN J UST after Munich the Editor of The Spectator allowed me to discuss with great freedom the damage done to our prestige in America by that settlement, damage...

THE NECESSITY FOR FACTS

By HAMILTON KERR, M.P. THE attack on Europe draws near. From the east, from the west, tt from the south, from the air, great blows are about to daze and break the German power....

By ROSE MACAULAY This is so with music, which can, like nothing else (except philosophy and religion), order the mind's crazy, incoherent chaos into a pattern. But what pattern?...

By THE REV. JOHN' A. PATTEN, M.C. It is a notable fact that so many leaders in world affairs place such high value upon the Bible and are ready to bear testimony to its...

FOUR years ago They came to this little town Carrying their bundles—women who did not know Where the sky would lie when their babies were born, mothers With children, children...

By HAROLD NICOLSON I T is old-fashionable, I know, to indulge in classical allusions; and among those who follow the advance of the armies in Italy there are few perhaps who...

Traced outlines of his northern fells And built the church across the lake From sullen peals of foreign bells. His dreams were faithful: a few miles Held all the earth he ever...

THE CINEMA " There's a Future in It " and

THE THEATRE Tint Span'sh playwrights, S. and J. A. Quintero,

enjoyed a brief vogue years ago through translations by Helen and Harley Granville- Barker, but such of their plays as I saw were slight theatrical pieces whose chief interest...

YOUTH AND THE FUTURE SIR, —Being a contemporary of Mr. Geoffrey

Rippon's I read his article on " Youth and the Future" in last week's issue of The Spectator with interest. I was President of the Oxford University Liberal Club just before the...

LETTERS TO THE EDITOR Sta,—Like many people, I have read and listened to numerous appeals for Christian unity, most of which were as sentimental and inconclusive as that of Mr....

Sin,—Mr. Rees urges the Churches to abandon "heresy hunting" but

does not explain why it should be regarded as right and proper for political parties to confine their membership to those who accept their basic dogmas, and wrong for Churches...

SIR,—In your article "Poland's Dilemma," published in your issue of

anuary 14th, you express the view that " the over-riding fact is that either Poland herself nor any other Power can prevent Russia from ing any Russo-Polish frontier that she...

Sta,—There is one rather important argument in your interesting discus-

sion of the Polish frontier problem which I find difficult to follow. You write: " The Russians say they are ready to concede to Poland any territory with an indisputably Polish...

A PRIEST IN A FACTORY SIR, —There is no reason why

a priest should not enter a factory whether engaged on war production or peace-time products. In fact, it is prob- ably a very sound policy for a priest to make contact with...

POLAND AND RUSSIA sm,—You say in regard to the Polish-Russian

controversy that there are faults on both sides. No doubt there are. That is usually the case in controversies. But your article, by its objective review of the salient facts,...

SIR,—Mary Paton is too unimaginative (surely civet, in the context she quotes, is a vivid new metaphor) or too limited in her choice of dictionaries: every one of the American...

Ste,—I have read Mr. Simpson's article in your issue of January 7th, headed " Methods of History." I am at a loss to understand why this charge of " debunking " is constantly...

GOOD easy prophets ask us to believe, as some urban politicians ask ti! to wish, that the great country houses will soon be dead as Dodo, Another point of view may be read in...

THE PRESS AND A GRIEVANCE

SIR,—In your issue of January 7th " Janus" falls below his normal standard of criticism. He accuses the Press of advertising the grievance of a man who started the Brains Trust,...

S IR, —I submit respectfully that Mr. F. D. Merralls's suggestion that we speak of "coventrating " instead of " hamburging " will not quite do. " To coventrate" is to devastate...

CATHOLICS AND THE SCHOOLS

S IR, —Catholics cannot accept the Agreed Syllabus, essentially Protestant In character, without offending their conscience and denying their faith. Because we claim to have...

The Czechoslovak People A History or the Czechs and Slovaks. By R. W. Seton-Watson. (Hutchinson. iss.) THE constant theme of Czech historians, if not of Czech history, is the...

THERE is an old Spanish proverb " Let death come to me from Spain," and certainly that country has often proved the grave of political adventurers. Cardinal Alberoni, a...

Tins book is, among other things, a timely reminder of the fact that economics are not the chief key to politics. East Prussia might be called the classic historical refutation...

Adventure in the 'Thirties

" MOUNTAINEERING used to be regarded as a rich man's game," says Mr. Shipton, and the illusion is not quite dead even now. I remember an August afternoon some fifteen years ago...

IN 1926 a small group of young people came to the conclusion that if the study of human biology was to become useful•in practice, it must be based not on the individual, but on...

Fables From Russia. By Ivan Krilov. Adapted by Stella Me Illustrated by Grace Huxtable. (Oxford University Press. 2s.) The Magic Jacket and Other Stories. By Walter de is Mare....

THE SPECTATOR" CROSSWORD No. 254

IA Book Token for one guinea will awarded to the sender of the first correct 50 lurian of this week ' s crossword to be opened after noon on Tuesday week, tibruary 1st....

SOLUTION TO CROSSWORD No. 252 ' SOLUTION ON The winner

By CUSTOS LIKE our leading industrialists, Britain's bankers are now showing themselves as being less concerned with the day-to-day adjust- ments of their particular piece of...