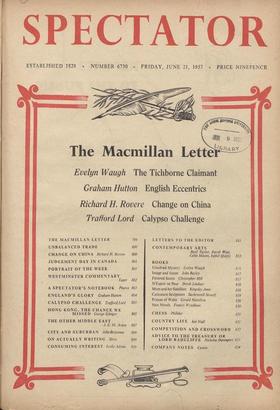 T HE first impression made by the Prime Minister's letter to Marshal Bulganin was a favourable one, and this was not entirely due to its style being better and more personal...

• T HE alarmingly large bill—£375 million—for imports in May following the unsatisfactory trade figures in April has now brought fears about the economic situation out into the...

By RICHARD H. ROVERE Our China policy over the years has been a product of Christian idealism and low politics. After Pearl Harbour, we had a bad conscience for not having come...

A GENERAL air of lassitude, attributable to the heatwave perhaps, has hung about inter- national affairs this week. In Washington, where the tem- perature has been up in the...

By a Correspmulent M aelean's Magazine was so ' sure of the outcome of the elections that its leading editorial of an issue which appeared on polling day informed its readers...

To begin with, I have now read full transcripts of the telephone conversations in the case. The first thing that strikes the reader is the outstanding incompetence of the police...

THERE HAS RECENTLY been a fine revival of the good

old hell-fire Socialism of yesteryear. My favourite specimens are Forward with its photo- graph of the Prime Minister 'gallivanting in topper and tails on Epsom downs,' as it...

MOST PEOPLE IF OFFERED a castle together with £250,000 to keep it up would probably accept it; some of them might even say 'Thank you.' But not apparently Members of Parliament....

I WOULD COMMEND IO those who,are mystified by the problems

THE SUPREME COURT'S judgement this week, in. those cases of

civil liberties, were well described by Mr. Alistair Cooke as 'a burial service for McCarthyism and few good words were spoken of the dead.' The judgements related to matters...

ONE POINT MADE by Macmillan in his letter to Bulganin

was that the Russians might cease to jam the Russian programme of the BBC. So they might. But I should not expect any great results if they did. For this service which was...

Otherwise and for many [divorce petitioners] the finding of the

court may seem to have little effect in reality, except when they come to be presented at court about which they worry, it is generally found, curiously little.—Henry Clinton, •...

wil4 perpetuate the Earl Marshal- ship in the Norfolk family and will enable the Duke of Norfolk to pay less tax. The first objec- tion is simply untrue. A'§ to the second, the...

By GRAHAM HUTTON g el ALL a dog Hervey,' said Dr. Johnson, 'and will love him.' Why? The Herveys were Earls of Bristol : cute, keen, crazy as coots; original, eccentric,...

Hong Kong, The Chance We Missed

By GEORGE EDINGER W HEN the Kowloon train stops at Lo Wu it is usually empty. A pity : for that border between the free world and the bamboo curtain is illuminating. On the...

By TRAFFORD LORD W E don't play cricket for fun,' said Sir Leonard Hutton, and his view is apparently shared to a man by the present England side, with the probable exception...

The Other Middle East

By J. E. M. ARDEN W HEN we say 'The Middle East' we are usually thinking of a physical area bounded on the south by the Sahara and the waters of the Indian Ocean; a cultural...

Two of the most attractive towns in the smith are Rye and Winchelsea. On the road to the second from the first you pass on your left about half a mile of ribbon development...

I have just returned from a motor tour of Umbria,

the Republic of San Marino, Ravenna, Perugia and Siena, going down white roads where ox-carts creak between the poplars, where the hills are like waves with surf on their...

By .STRIX T AM writing. I Looking over my shoulder, the ghost of my long-dead governess compliments itself on recog- nising the vestiges of the pothooks she taught me to...

By JOHN BETJEMAN AN old and distinguished Oxford Don I knew, who is now with God, used to say that if any wsthetic matters connected with building or tree- planting or...

By LESLIE ADRIAN A TEMPERATURE in the eighties is invariably the sign for the British male to emerge in an aura of moth-balls and an assortment of putty- coloured garments known...

JUNE 23, 1832 THE German Diet is busy concocting regulations to avert the danger of such another meeting as that which lately took place at Hambach; the sentiments expressed at...

SIR,—You rightly point out in your excellent edi- torial on the Middle East that Britain and America should throw overboard the policy of appeasing Nasser at the expense of...

SIR,—When I read Mr. Adrian's remarks about the food at

Glyndebourne in your June 7 issue I thought he was being rather pessimistic. Last year I remember having an excellent meal in the Mildmay buffet : Scotch salmon and salad,...

SIR,—May I add a further word on this subject, as I happen to be in Rome where the noise and amount of traffic seem to me to put London to shame? At the moment, however, 1 have...

be allowed to pass without comment. Cer- tainly one may picnic at Glyndebourne—in the car park. A pleasant enough place, where you need offend no one. I have done it often,...

SIR,—My admiration for Taper is almost unlimited, But Mr. or

THE ALBERT BRIDGE SIR,—Surely the solution of this problem is

to re- erect the present bridge in Battersea Park. Mr. Betje- man can then enjoy it in peace and it would provide a splendid monument to Mr. Morrison who did so much to preserve...

'THE MOON AND SIXPENCE'

SIR,—The melodic phrase Mr. Colin Mason refers to at length in his article on The Moon and Sixpence does not, as he so dogmatically states, occur for the first time at the end...

SIR,—COIM Brogan's excellent account of one per- son's impression of

a secondary modern school was, alas! only too true, and I Mink that it would be true to say that a goodly proportion of grammar- school pupils in many areas, particularly in and...

They are shrewd and good-humoured—' "Miss So - and - So is too good for us."' They are inde- pendent and resourceful—`A large number of them had interesting hobbies and...

entered a secondary. modern school in this town. I have learnt a great deal in that time : that five years was certainly not wasted. Of course, the concentration of children in...

your columns in calling attention to the extent to which secrecy prevails in local administration will be welcomed, particularly by those who have for years advocated amendment...

SIR,—While it will hardly be of value as material, it may interest Mr. Tahmankar (Spectator, June 7) to learn that the Rani of Jhansi was cut down by a trooper of the VIII...

SIR,—The freshness and quality of British food was sacrificed during the war as it was necessary to cen- tralise supplies to operate rationing. The continuation of controls by...

(Sadler's Wells.) 4acts —It's the Geography that Counts. By Raymond Bowers. (St. James's.)—Six Months' Grace. By Robert Morley and Dundas Hamilton. (Phcenix.) IT is almost...

The Key to Kelly THE huge, sparsely populated ter- ritories of the Commonwealth— Canada, South Africa, Australia, New Zealand—possess none of those conditions which are...

The Rising of the Moon. (Warner.) —How to Murder a Rich Uncle. (Gaumont.) — Lizzie. (London Pavilion.) THE Irish, of which I am one of the expatriate sort myself, have a good...

tir.41 1 A9 THE new production of L'Italiana in Alger! did not get Glyndebourne off to a very brilliant start last week. 4 - Rossini's opera is a lively runner without much...

Unsolved Mystery By EVELYN WAUGH IF has long been known to the almost limitless 'circle of his acquaintances that Mr. Douglas Woodruff was preparing a treatise on the Tich-...

THE decades after 1660 were Puritanism's testing time in England. During the civil war Puritans had fought what they believed to be God's battles; and God by blessing their...

runs extremely scholarly and interesting book turns on the material of 'romantic' poetry the same sort of searchlight that has been unremit- ingly focused for so long on the...

MONTHERLANT'S work has never failed to pro- voke bitter and violent controversy. By badk- ground and inclination a conformist, a believer in traditional virtues, he has, in a...

Mum and Her Satellites

IF the authors of this fascinating work are fair samples of our younger sociologists, then some of the contemporary cracks about that profession are going to look pretty silly...

rigures of Fun : The Caricature-StatueGes of Jean-Pierre Dantan. By Janet Seligman. (0.U.P., 21s.) Figures of Fun, fully annotated if less elaborately compiled, is the first...

Heirs Apparent. By Thomas Sidney. (Allan Win- gate, 25s.) THERE seems to be no doubt that the early Hanoverians had all the vices of the Stuarts but none of their virtues. The...

IT is a good thing that Mary McCarthy's first novel, The Company She Keeps, has been made available again; first published fourteen years ago, it has been difficult to get hold...

MADAME PRUNIER'S La Maison (Longman, 21s.) is a long way above most histories of individual lirms, which are usually resolute pieces of pub- licity in a thin disguise. True, the...

LEAF CURL A reader asks about the treatment of leaf

curl found in stone fruits in this sort of weather. Lime sulphur or Bordeaux mixture are preventives, leaf curl being a fungus disease, but the immediate action is to pick off...

'When we lived at X,' remarked the old man, 'we 'ad a fine ole time gettin' water. Every summer about now the well run dry or got so low you couldn't get muter. Landlord was a...

Green woodpeckers are oftener to be found feeding on the ground than in trees just now, for ant colonies are active in the heat and stream about grassy mounds like citizens in...

By IAN NIALL THE scent of freshly cut hay drifted down the slope to where I walked this evening. Flies were congre- gating under the overhanging trees, and I had to brush my...

SPECTATOR COMPETITION No. 381 Report by Papoose The usual prizes were offered for an astrological charm for incantation at the summer solstice. As R. Kennard Davis remarked...

SPECTATOR COMPETITION No. 384 Set by Guy Hadley A prize

of six guineas is offered for at extract from Lewis Carroll's posth14111014S master. piece, Alice in the House of Commons. Limit. 200 words. Entries, addressed 'Spectator...

ADVICE TO THE TREASURY OR LORD RADCLIFFE

By NICHOLAS DAVENPORT FRANKLY, I had no intention of • referring to the gilt-edged market \ • , again for some considerable time—: it is becoming a bore—but I cannot let pass...

By CUSTOS THE stock markets began the week with 'an end of the account' feeling. The gilt-edged rally faltered, gold shares went easier and copper shares turned weak. Oils had...