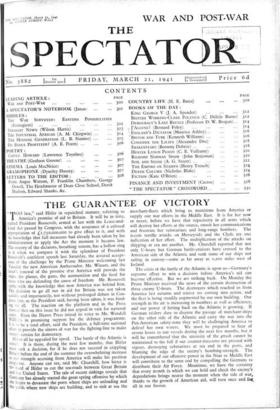 THE GUARANTEE OF VICTORY

T 00 late," said Hitler in sepulchral manner, referring to America's promise of aid to Britain. It will be in time, replied President Roosevelt, armed at last with the...

NEWS OF THE WEEK G ERMANY'S infiltration programme in the Balkans

is not going according to plan. The move into Bulgaria, success- fully accomplished, was not an end in itself. Much of its value to Germany lay in the fact that it exposed the...

As our columns converge on Addis Ababa, co-operating closely with, and substantially aided by, bands of Abyssinian " patriots " headed by British officers, the day when the...

India in the War—and After

The resolutions adopted by the Bombay Conference of Indian Moderates last week and those of the Chamber of Princes at Delhi on Monday and Tuesday bear no ostensible relation to...

Negotiations are in progress, as they should be, between the British and American Governments regarding the supply of food to unoccupied France. There are manifestly objections...

Meanwhile Parliament has had a Secret Session, a minor debate

on Service Estimates and a further debate on Recon- struction. Mr. George Hicks gave an interesting account of his new department, the Ministry of Works and Buildings. After...

On the wider aspects of the Ministry neither Mr. Hicks

nor Mr. Greenwood added anything to the carefpl statement made by Lord Reith in the House of Lords. Incidentally it is worth mentioning that Lord Reith sat through the whole...

An International Air Force The story of the Allied -

airmen who are now fighting or training in this country side by side with the R.A.F. will provide some fascinating chapters for the future historian. Among them are Czechs,...

The New Call-Up in Industry

Mr. Ernest Bevin's broadcast on Sunday shows that. the time has come, and the Government realises it, when our resources in nian-power are about to be strained to the utmost in...

Our Parliamentary Correspondent writes: The most im- portant eients this week have neither been announced in Parliament nor form part of domestic Government policy. President...

Subscr i ption 3os. a year to any part of the world

B OTH inside this country and outside it thoughts and energies are being directed to two distinct but associated ends, the prosecution of the war and preparation for the...

UT ITH air-raid fatalities on Merseyside and Clydeside alone on three nights this month totalling more than those for the whole country in the twenty-eight days of February...

While British and South African troops converge on Addis Ababa

from every frontier of Abyssinia it is worth while remembering that guerilla warfare against the Italian con- querors has been perpetual for the past five years. It has been...

Next to the new Ambassador, I suppose that President J.

B. Conant, of Harvard, is the most distinguished American now on an official mission to this country. President Conant, who is one of the leading chemists in the United States,...

Anonymity in journalism is on the whole on the wane,

but the foreign correspondents of papers like The Times and The Daily Telegraph remain still " Our Own Correspondent " simply. Occasionally they should be given in their own...

It is sad that M. Titulescu is dead. No one

who ever met him in any of the odd quarters of Europe where you were liable to meet him will ever forget him. His duels with Count Apponyi at Geneva on the perennial " optants "...

I have been discussing serving Generals this week with a

General of great experience and discernment on the retired list, who in the past has been in close and frequent contact with Sir Archibald Wavell and holds as high an opinion as...

By STRATEGICUS T HE main danger of the moment is that we should either exaggerate the importance of the military movements that are taking place in the Near East or should fail...

By WILSON HARRIS ts1 issue raised more or less casually in the correspondence columns of The Spectator last week is in reality of such °found importance as to merit examination...

By A. M. CHIRGWIN I T is not surprising that, amid greater preoccupations, the recent report on the Copper Belt disturbances in Northern Rhodesia has attracted little...

By L. B. NAMIER .1 N The Spectator of April 12th, 1940, Mr. Harold Nicolson, when discussing the argument which attributes the "apparent dearth of rising statesmen " to " a...

By A. E. PEARN T HE balance-sheets of the principal joint-stock banks have recently been published, and the figures so disclosed throw an interesting light on the criticisms...

Castle Howard, in Yorkshire, where the writer spent much of his childhood, was burned down last November. THIS is the dream—this is the nightmare— Here magic real, and the...

"Angels Over Broadway." At the Regal.--ii The Trail of the Vigilantes." At the Odeon. Few Hollywood films pretend to be more than entertainment; it is only rarely that they...

Beethoven and Bartok AMONG the great commonplaces in the repertory of music none has, I suppose, become more trite than Beethoven's Violin Con- certo. Even for the ordinary...

THE THEATRE New Faces." At the Apollo. How many years it seems since the nightingale first sang in Berkeley Square. The square was intact in those days, no bomb had fallen in...

Sta,—Dr. Vaughan Williams, in an almost perfectly cut cameo of Sir Walford Davies as the mentor of Everyman (in your issue of March 14th), puts in significant relief his...

SIR, —Your leading article of March 7th, " Which New Order? " is a most useful and constructive contribution to the War Aims con- troversy. As you point out, there is at present...

CONSERVATE SOCIALISM" ant sure that Mr. Hamilton Fyfe is right in forecasting great political and economic changes in the British Empire when the war is over, but 1 think he is...

Sta,—Recently reading a book published by William Heinemann, ion, by Sidney Whitman, German Memories, I came across the following statement of Prince Bismarck, which I think may...

A FRIEND OF LAMB Sta,—Your correspondent, Mr. T. B. Nutter,

must adduce stronger evidence (and cite his references) before he makes us lose our belief in a time-honoured story which has been accepted without question by such an excellent...

THE BAYONET IN WAR SIR, —The letter from Mr. A. C.

Taylor raises the question of the value of bayonets, and also refers back to "A Spectator's Notebook " of the previous week. Perhaps I can answer both criticisms together. Of...

" A NEW START WITH FARMING "

SIR, —Mr. Orwin is a great authority on agriculture and I had hoped that he would have carried his argument rather further in a third article. Nobody will dispute his view that...

article, " More School Problems," attention to the merits of the great secondary day-schools and yes them the praise which unquestionably they deserve. It is, hags, significant...

Sta,—As an Oxford man I am, I hope, as interested in the good name of Oxford as much as " Janus " or anyone else. But I also happen to know about the work which the Oxford Group...

SIR, —Mr. Herbert Worsley defends the B.B.C. report of Mussolini's recent speech. Emphatically, I do not. " Janus " is perfectly right— after the B.B.C. commentary (not news in...

I have been watching kingfishers all winter, and now a

West Country correspondent sends a series of interesting notes about them, discuss- ing mostly their coloration, but recording also how they come righ t up into the heart of the...

In the Garden The first flowers of the year have

gone. Tulips suddenly take the place of snowdrops, daffodils of the yellow crocuses. Every. rear Tulip kaufmaniana is an unfailing joy: large, delicate water-likes of...

Selling Surplus It became possible ; for the first time in

my gardening life, to sell some surplus vegetables. The experience may be useful to those who are attracted by the idea of a little summer pin-money. I put up six dozen leeks...

If there has ever been a bad number of The Countryman I have never seen it. The fourteenth birthday number is slim, but in all other respects as admirable as ever. Its range is...

Sta,—I have not seen the volume of drawings of Campden by F. L. Griggs, which is noticed by Mr. Graham Greene in your issue of March tath, though I have been familiar with the...

The Plain Man as King SPEAKING to one of his guests in the drawing-room of Buckingham Palace after the State Banquet to President Wilson in 1918, King George V expressed his...

The Making of the Labour Party British Working Class Politics,

J'accuse ! Andre Simone. (Harrap. 8s. 6d.) THOUGH the writer of the foreword of this book asserts that it is " told by a Frenchman," and that " only a Frenchman could Or ■...

THIS is another of those vigorous, aggressive, readable and useful tracts in whose production Mr. Williams' energy never flags. It falls roughly into two parts. On the one hand,...

A Selection from the Letters and Speeches of Oliver Cromwell. Edited by L. C. Bennett. (Nelson. 7s. 6d.) Miss BENtarr has edited a volume which will be welcomed by all...

From Ottoman Into Turk

Briton and Turk. By Philip Graves (Hutchinson. 12s. 6d.) I no not know when first currency_ was given to the Turkish proverb eski haman eski tas — "It's the same old bath and...

Consider the Lilies, being the second part of Edifying Discourses in a Different Vein. By S. Kierkegaard. Translated by A. S. Aldworth and W. S. Fernie. (C. W. Daniel. 4s. 6d.)...

Shakespeare. By Mark Van Doren. Wien and Unwin. 12s. 6d.) MATTHEW ARNOLD'S famous statement about Shakespeare that others abide our questions, but that he is free, may have...

(Oxford. 2I5.) IF Dr. Johnson had not been so fond of dinners and idleness and of the company of a woman who was able to appreciate his ponderous wit and endure his frightful...

The Man of Bedford Park

Soil and Sense. By Michael Graham. (Faber. 75. 6d. To most people soil is a dull subject, and perhaps sense is even duller, but from these two ingredients Mr. Michael Graham...

Readerswho experience difficulty in obtaining copies of TL I Spectator from

Journey Round an Album

Stoughton. 8s. 3d.) THERE is probably no better corrective for an over-addiction to crime-novels than to read half a dozen of them while suffering from influenza. Only the best...

The Defenders. By Franz Hoellering. Translated by Ludwig Lewisohn. (Routledge. 9s.) OF twentieth-century Europe it can at least be said, however wearily, that it is piling up...

By CUSTOS SOONER than the City—or the Courtaulds board—expected, Sir Edward Peacock has made a beginning in his unenviable task of selling Britain's "direct investments " in...

BANK OF AUSTRALASIA STRONG FINANCIAL POSITION THE CHAIRMAN'S REPORT THE following is a summary of the statement by the chairman, Mr. Edmund Godward, circulated with the report...

SOLUTION TO CROSSWORD No. 104