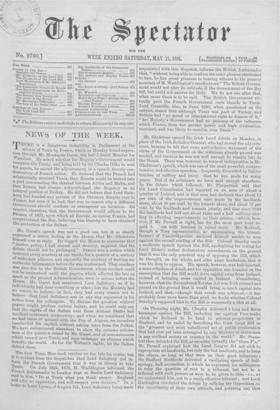 Mr. Guest's speech was not a good one, but it

so clearly expressed a latent feeling in the House, that Mr. Gladstone himself rose to reply. He begged the House to remember that " justice, policy, T had almost said decency,...

T�I HERE is a dangerous irritability in Parliament at the seizure of Tunis by France, which on Monday found expres- eion through Mr. Montague Guest, the half-Liberal Member for...

The first Tunis Blue-book reaches us too late for notice,

but it is evident from the despatches that Lord Salisbury did in- form the French Government that it was at liberty to take Tunis. On July 26th, 1878, M. Waddington informed the...

4. ** The Editors cannot undertake to return Manuscript in any

Mr. Gladstone opened the Irish Land debate on Monday, in

place of the Irish Solicitor-General, who had moved the adjourn- ment, because he felt that some authoritative statement of the views of the Government on the criticisms already...

On Thursday night, Mr. Chaplin delivered a long and fierce

harangue against the Bill, including one against Free-trade, which he declared to be fatal to peasant-proprietors in England, and he ended by describing the Irish Land Bill as...

M. Gambetta has carried the Scrntin de Lige through the

Chamber, by a very narrow majority. The project was brought forward on Thursday, and was denounced by M. Bardoux, reporter of the bureau to which it had been referred, but was...

The Bishop of Gloucester and Bristol presented to the Con-

vocation of the Province of Canterbury, on Tuesday, the Revised Version of the New Testament, in a speech explaining that it had gone through six, and in some sense even seven,...

When the House divided, there appeared for the second read-

ing a majority of 352 against 176, exactly two to on 0,—a majority very far in excess of the largest majority which this Government can usually command, and that, too, although...

Something like a social war is breaking out iu Southern

Russia. The common people are in great distress, and disturbed by false promises, and in Kiev, Odessa, and, it is said, twenty other towns, they are attacking the rich. As among...

Alexander III, has decided to adhere to the old ways.

Pressed by entreaties from Berlin, by some councillors, and by his own tendency to prefer" Russian "institutions—he has just restored the beard to the Russian Arm y, prohibited...

Lord Salisbury delivered a most important speech on Thurs- day,

at a dinner given by the Merchant Taylors. We have described the speech elsewhere, but its general effect was to condemn the Irish Laud Bill utterly as a confiscatory measure,...

Mr. Dillwyn brought on his resolutions for strengthening the. command

of the House over its own procedure on Tuesday night, in a speech candidly confessing that he had considered it his duty often to obstruct the carrying of important mea- sures...

The Sultan is striking down the great Pashas, one after

another. Mahmond Darned is in prison, and it is doubtful if he is still alive, as he has had " a stroke of apoplexy,"—a disease of Turkish prisons—and Midhat Pasha is a prisoner...

The Americans have been greatly interested of late in a

fierce struggle with the Republican Party. President Garfield thinks he has a right to choose his agents, and has appointed Mr, Robertson, a most qualified candidate, Collector...

The Americans are beating us again. This time, they have

invented a pencil which will make an indelible mark. The load in the pencil is not plumbago, but a composition ; it writes as easily as a pencil, and after a few seconds, the...

The House of Lords is very uneasy about the state

of Ire- land, and well it may be, as no public body in this country has 10 much to answer for as the House of Lords. Its rejection of the Disturbance Bill of last Session was,...

The Bradlaugh controversy is adjourned till after the Irish Land

Bill has passed the House of Commons. Yesterday week, Sir Wilfrid Lawson was appealed to by Mr. Labouchore, on behalf of Mr. Bradlaugh, not to press his motion at present ; Lord...

with more than usual ferocity, in relation to the tearing- down by the police of the Enniscorthy placards inciting the people to assemble in their thousands at Wexford, to see...

From Mr. Gladstone's reply to the deputation on the French

and Austrian sugar bounties, which he received on Wednesday, we may fairly infer that the Prime Minister agrees with this journal that the objections which there may be to the...

ENGLAND AND FRANCE. T T is impossible to speak too strongly of the conduct of those members of the Tory party who, with the Morally Post as their organ, and a connection of Sir...

THE PROSPECTS OF THE LAND BILL. A FTER eight days' debate,

the House of Commons has accepted the principle of the Irish Land Bill by an im- mense majority. In spite of the defection of Mr. Parnell and his 28 friends—who are, before all...

MR. GLADSTONE ON THE LAND BILL.

The first question Mr. Gladstone approached was that of con- fiscation and compensation. Where there was confiscation, he admitted and maintained that compensation ought to...

THE IMMEDIATE FUTURE IN RUSSIA.

T HERE is, we fear, little further room to doubt that the new Czar, after a severe struggle in his own mind and many conferences with all manner of advisers, has resolved to...

THE ROYAL COMMISSION ON ECCLESIASTICAL COURTS.

I N the Gazette of Tuesday all who care to do so may read the names of the Royal Commissioners appointed to " inquire into the constitution and working of the Ecclesiastical...

T HERE has been a curious misunderstanding in the public mind as to what was expected of the Revised New Testa- ment. Many appear to think that the Translators were bound to...

G THE ARABS OF THE DESERT. LANCING through a new volume

of poems which the author rather absurdly calls " The Love Sonnets of Proteus," we came upon this very fine and suggestive address to the Bedouins :— The " many-charactered "...

"T HIRDLY," said Paley, in giving his reasons for shifting from Dalston to Stauwix, "I began to find my stock of sermons coming over again too fast." Mr. Spurgeon, at a con-...

THE LAW OF THE OATHS' CASE. 1 4E have received the

following letter from a barrister of some standing :— " Sin,—I hope that I am a lawyer, and that, as a Liberal, I am not blinded by party spirit ; but I am unable to agree with...

THE IRISH LAND BILL. ere TRH EDITOR OF TICE 14 SPROTA,TOR.1 SIR, — The fable of the Sibylline Leaves represents the truth of Irish history, and in a special sense that of the...

[TO Tits EDITOR OF TI119 "SPEOTITOR.1 Sin,—If Mr. Romance would prove what he asserts, that th opponents of Vivisection are pursuing a harmless Will-or , the- Wisp (I quote his...

THE BISHOPS AND SUNDAY TRAINS. [TO TUE EDITOR OF TUE

4 , SPECTATOR :1 SIR,—Dr. Littledale is mistaken in saying that all the Bishops signed the memorial about Sunday trains. Bishop Hampden, of Hereford, did not sign it. The only...

[TO TTIE EDITOR OF " SPECTATOR."] SIR,—That there may be such a thing as law by misadventure —say, through some marvel of misinterpretation fallen into by an exceptionally able...

AMBIGUITY OF THE ORNAMENTS RUBRIC.

TRH ROYAL ACADEMY. [SECOND NOTICE.] IN our first notice, we spoke a little of the reason why the iucreased interest of the public in Art matters had not actually advanced the...

OLD DREAMS. WIIERE are thy footsteps I was wont to hear, 0 Spring I in pauses of the blackbird's song P I hear them not : the world has held mine ear With its insistent sounds,...

DR. WHEWELL.* Mits. STAIR DOUGLAS has shown much tact, judgment, and ability in the performance of a task which presented some un-• usual difficulties. It would appear that...

Tuns is a work of unique importance in itself, and in relation to the controversies of the time in which we live. There is no work in English literature which covers exactly the...

opportunities for considering the Ant, and the observer is occasionally wise in running away from that moral-pointing insect. While Major Serpa Pinto was still in the...

THOMAS BEWICK, the well-known engraver on wood, whose works have formed one of the most interesting of recent exhibitions at the Society of Arts, had the rare good-fortune to...

MANY profound reasons have been given why the study of modern languages does not take the place in education which has been held for nearly five centuries by Latin and Greek....

We have to acknowledge the receipt from the Clarendon Press at Oxford of the Text of the Greek Testament on which the readings adopted by the Revisers of the Authorised Version...

Decoration and Ficrniture of Town Houses. By Robert W. Edis.

(C. Kegan Paul and Co.)—This book contains the " Cantor Lectures, delivered before the Society of Arts, 1880, amplified and enlarged." It is a noticeable contribution to the...

Jewish Life in the East. By Sydney Montagu Sarnue% (C.

Began Paul and Co.)—Mr. Samuel gives us a very interesting view, stated with perfect candour, of the condition of his nation in Egypt and in Palestine. Naturally, the chief...

Samuel Pepys, and the World He Lived In. By Harry

B. Wheatley. (Bickers and Son.)—Those who have not time or inclination to grapple with the famous Diary may find a very valuable substitute in this volume, which gives within a...

Voyage of the Elizabethan Seamen to America. Edited by E.

J. Payne, M.A. (De Is Rue and Co.)—Mr. Payne has hero " selected I and edited, with historical notices," thirteen original narratives from the collection of Haklnyt. The period...

Memoir of William McKerrow,,D.D. By his Son, J. M. McKerrow,

B.A. (Hodder and Stoughton.)—Dr. McKerrow was pre.eminently what used to be called a "political Dissenter," a term which, in days not long past, conveyed to many minds, oven...

Helps to the Study of the Bible (Oxford University Press)

is a most convenient and useful volume. The contents are thus summarised in the title :—" Analytical notes and summaries of the several books ; lists of animals, birds,...

Memoir of the Rev. Henry Watson Fen, B.A. By the

Rev. G. T. Fox. (Religious Tract Society.)—This is a new edition of a book which was first published about thirty years ago. The subject of it was educated at Rugby, wont out as...

A Thousand Thoughts, from Various Authors. Selected and arranged by

Arthur B. Davison. (Longmans and Co.)—There is a freshness and novelty about this volume which books of extracts do not commonly possess. Mr. Davison has wandered far from the...

A Short Manual of the History of India. Vol. I.

By Roper Leth- bridge, M.A., C.I.E. (Macmillan and Co.)—Mr. Lethbridge's com- pilation will make an admirable class-book, and it is to be hoped that English schoolmasters will...

(Hodder and Stoughton.)—Mr. Walters has it for his object to tell his readers how they may "thrive," for he points out that " thrift " is something much wider than the " saving"...

Short Readings for the Christian Year, Part L, Advent to

Easter, by E. W. Bodley (Skeffington), comes recommended by a preface from the Bishop of Tasmania. The writer's plan has been to take a short passage of Scripture, commonly from...

Twelve Months with the Bashi.Razouks, by Edward Money (New- man),

is the second edition of a book which was published about twonty-throo years ago. It would be worth reading, if it wore only for the sake of seeing what a vast amount of money...

Principles of Rhetoric. By A. S. Hill. (Harper, New York

; Sampson Low, London.)—The title of this book sounds, perhaps, rather forbidding; but for all that, it is a book one may take up at a spare moment and open at random, with some...