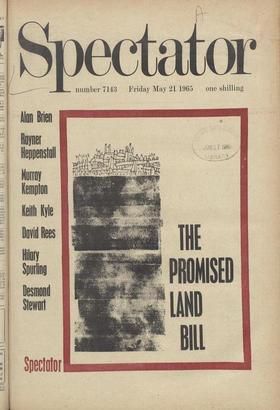 The Sound of Battle

I N any sudden change of the political weather the danger for an opposition is that it will be caught wearing the wrong clothes. The Tories who have been tempted out by the...

— Portrait of the Week A WEEK OF CEREMONY: the Queen

began the first State Visit to Germany by a British Sovereign since 1913, the Kennedy family came to London for the inauguration of the Kennedy memorial garden at Runnymede, the...

The Shadow of 1969 KEITH KYLE writes: The London NATO conference was a good conference, as these conferences go nowadays. This means that the French were not nasty to anyone...

The Strength of China BRIAN CROZIER • Amis and Bond SIMON RAVEN One year's subscription to the'Spectator: f3 15s. (including postage) in the United Kingdom and Eire. By...

PAUL LEWIS writes from Brussels : The Common Market was surprised by Mr. Wilson's decision to turn next week's EFTA ministerial meeting in Vienna into a full-scale inquiry into...

The weather is playing it English, which is the same as saying Rhineland weather, so that nobody can be sure whether it will rain or shine; and the crowds have taken a little...

TIM HEALD writes: Oxford University's reputation, never particu- larly stable, seems over the past few weeks to have plumbed depths unknown since the days of Gibbon. Apart from...

Wel- don's absurd theory of Organic and Mechanical States when it was applied to political systems, I do understand it when it is applied to magazines. There are (outside the...

The Promised Land Bill By ALAN WATKINS TN politics the problem of Ireland has been re- 'placed by the problem of land. It is a problem which at one time or another both main...

Spring is a little late - this year for the first quarterly issue of the 201h Century under its new owners. It is very welcome. The current issue is entirely devoted to Class....

One-Man Crusade The uncompromising individualist has a tough role in

British industry today. Such a man par excellence was Lionel Sefton, whose death at the age of sixty I learn of with regret. I had followed appreciatively his one-man crusade on...

Man Bites Scoop Why, I ask rhetorically (don't write to

tell me), does a no-news story suddenly become news? At Glasgow on Monday a girl student asked me if I would serve under Sir Alec, and I gave the same sort of answer as I gave...

Southern Justice Few people have commented on the trial of

Collie Lee Wilkins for the murder of Mrs. Viola Liuzzo in Alabama. Mrs. Liuzzo, you may re- member, was the white woman who was shot dead while driving with a negro during the...

Let Them All In The New Musical Express is not

usually part of my required reading, but having been urged to study one of its editorials by one of my younger constituents 1 find myself interested in the point. Briefly it is...

T Loot: back with pleasure on one particular 'sentence in the debate on the steel White Paper: We have seen also, in Scotland, the begin- nings of what will be a tidal...

From DESMOND STEWART CAIRO T lIE Cairo constants hug the memory: from the opened aeroplane the warmth that furs you; the swift-eyed walkers; the overcrowded streets that lose...

From MURRAY KEMPTON NEW YORK O N Sunday night. President Johnson is said to have called a Senator, restless but silent until now, to say that, if he would hold his tongue for...

Does the Kidney Squeeze Hurt?

By HILARY SPURLING I HOPE you can drink,' said my companion, I looking doubtfully at me on the steps of the Pub where he had promised to introduce me to I ommy Mann, undefeated...

f my brief letter on Gibraltar (May 7; too brief. 1 see, but would you have printed a long one?) disturbed any folk there; I regret it. I have been there, by land, sea and air,...

SIR,—Political Commentary' last week included the words: 'He was rather like one of those officious RAF air-sea rescue helicopters which swoop upon unsuspecting, and perfectly...

SIR.. —In the review headed 'Norman X' by A. Alvarez (May 7). the critic writes: `Violence and schizophrenia as values in themselves is not a con- cept original to Mailer or...

SIR,—I am editing the seventh annual anthology of Universities' Poetry, which each year aims to be a selection of the best student poetry available from the British and...

SIR,—Havin g been privileged to read an advance copy of Emyr Humphreys's outstanding new novel, 1 was happy to find your reviewer, Goronwy Rees, endorsing my opinion about its...

SIR,—If racial performance or achievement is to be the criterion, as Mr. Nkosi holds, and if we dis- regard the facts of racial evolution and history, then the least Mr. Nkosi...

SIR,—Leslie Adrian is too naive when he asks 'Why pay cash?' when account customers pay no more than cash customers at department stores. The managers of such stores are...

Sue.—The best game of rugby Quoodlc has seen this year (by which I take it he means 'this season') was the Rugby League cup final. Poor Quoodle. to have missed the Fiji v. Welsh...

§IR,—In speeches on the need to modernise Britain, the Prime Minister is fond of inveighing against the `Luddite' mentality. It is reported that railwaymen now threaten go-slow...

SIR,--I am grateful for all the favourable things that Mr. Martin Seymour-Smith says, in his review, about my Samuel Johnson: Selected Writings. But the de- cision to modernise...

TT doesn't look as though the BBC's late Satur- 1day

night problems are going to be solved by Hot Line. It's very much the usual celebrity- conversation nonsense, only instead of Mr. Andrews asking such questions as `Do women...

MUSIC The Taste for Lace

G LYNDEBOURNE is at it again. There is neither faltering nor loss of face. By 'it' I mean eighteenth-century airs, graces, grimaces and fal-lals; elegant if unprofound...

CINEMA War For The Boys

In Harm's Way. (Plaza, 'A' certificate). A ALTHouati by uncountable decibels the noisiest film of the week (I felt like the man in Dorothy Sayers's belfry killed by sheer...

By DAVIIA, REES F OR some years before the publication of By Love Possessed in 1957, James Gould Cozzens had enjoyed a respectable, if obscure, reputation. That novel soon...

JEAN GENET is, I suppose, a true creative writer, in a darkly turbulent way, inchoate, at his best in the theatre, where a producer can impose form. Maurice Sachs was not a...

High Noon of Empire. By Michael Edwardes. (Eyre and Spottiswoode, 35s.) ALMOST everything is true of a large and ancient country like India, and one feels that if Mr. Segal had...

All the Conspirators Mos . ' . historical novels have too much bogus colouring, too little humour, trivial human motives, and insufficient feeling for the am- biguities of...

ONE of the funniest scenes in fiction is that in Ilf and Petrov's Golden Calf (1931), set in a Soviet lunatic asylum. The inmates are all sane. But then 'a loony-bin,' as one of...

A FRIEND of Georges Bonnet is reported as saying that the latter 'suffers from a well-nigh physical incapacity to tell the truth to the end'—one of the kinder remarks made of...

Investment Notes T long last the gilt-edged market staged a recovery this week, but only on the hope that the Chancellor in the committee stage of thi Finance Bill will make a...

Nicholas Davenport is on holiday.

By MA RY HOLLAND Even with this week's latest increase bringing the price of letters up to fourpence a go, it is prob- able that most of us will still find the financial aspect...

Cool Customer By LESLIE ADRIAN SEVEN years with the right refrigerator may never be set to music, but it's a nice tribute to the Lec Inter- national and to Which?, whose...

I can understand how women came to con- fuse the offering of affection with the provision of nourishment. The monster ingratitude reveals Itself not so much in biting the hand,...