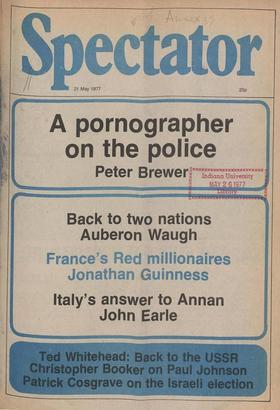 Judges are not without fault and it is right and proper that their judgments and sentences should be open to criticism. Politicians are as entitled as any other to criticise...

Perils of Jay-walking John Grigg The Prime Minister and the Foreign Secretary both have naval connections — Mr Callaghan as a former lieutenant RN, Dr Owen as MP for Plymouth...

Apart from a handful of political correspondents and those politicians who want a managed press, few people in Whitehall, Fleet Street and elsewhere will feel any great regret...

Back to two nations Auberon Waugh While not pretending to match Peter Jay's magnificent self-sacrifice in taking a fifty per cent cut in income to be ambassador in Washington,...

The end of the Alignment

Patrick Cosg rave Complicated, confused, frenetic and sometimes hysterical though they have always been, Israeli politics have nonetheless, until last Tuesday night, always...

Jonathan Guinness M. Jean-Baptiste Doumeng is vaguely known to the British public as the French Communist multimillionaire who arranges sales of European butter to the Russians...

From hard labour to hard rock

David Levy Moscow It was Christmas Eve, 1974, at the American Ambassador's residence on Spassopeskovskaya Square; the immense interior expanses of the baronial mansion seemed...

Police and the pornographers

Peter Brewer George Vinn, one of the witnesses in both police corruption trials, once said to me, `I know more coppers than the fucking Commissioner.' He was drunk at the time...

Richard West If Sir James Goldsmith wants to know how to run a cheap and efficient newspaper, he could hardly do better than take a look at his erstwhile antagonist Private...

Alan Watkins English is still ruled more by authority than by reason. We continue to write tinder the despotism of the Fowlers. Our mutual friend is a phrase in point. Many...

Further trials Jeffrey Bernard It was just after "Lucky Sovereign won the Mecca Dante Trial Stakes at York that we television punters, who for some reason or other couldn't...

Market cheers Nicholas Davenport There are many good reasons why the equity share market should continue t° behave in a more bullish and confiden t manner political reasons,...

Sir: I read Sir Oswald Mosley's letter in your issue of 14 May with a certain degree of surprise. At no time did anyone (certainly not Churchill) canvass the policy that we...

Sir: It is curious of your reviewer, Robert Skidelsky, to have written (23 April) nearly three columns on A. • L. Rowse's Homosexuals in History, without once remarking that...

Sir: Neither Mr Gorden (14 May) nor Mr Forbes (30 April) seems content that Mosley's . pre-war policies were different from those of the Germans. Their lengthy diatribes amount...

Sir: In his Notebook (14 May), Richard West mentioned some ways in which Orwell's vision of 1984 has already been surpassed in 1977. A further pertinent example concerns the...

Sir: From the columns of a weekly newspaper, circa 1962: 'There Will be no Lib-Lab election pact because "politics are a matter of principle and not a cynical exercise in...

Sir: Well done, Mr Cosgrave, on your encouraging lock at 'the fourth R' (7 May), and for your reminder of, and defence of, our schools' responsibility under the 1944 Act. Long...

Sir: The contempt for your readers that you demonstrate by continuing to emploY Richard Ingrams as your TV critic is tr. 111 Y d breathtaking. Hiring unquali fie ,...

Christopher Booker Enemies of Society Paul Johnson (Weidenfeld and Nicolson £5.95) This book is bound to arouse considerable expectation in many, people's minds. The question...

martin short T he Great Game: Memoirs of a Master Sal, 95) Leopold Trepper (Michael Joseph £6. T he most extraordinary thing about The o reat Game is that its author has...

Peter Ackroyd Trixie Trash: Star Ascending Tom Wakefield (Routledge and Kegan Paul £3.95) Having had my mind battered by any amount of schlock, and after reeling through so...

Benny Green A Parcel of Time Richard Kennedy (W hittington Press £4.50) Richard Kennedy will already have built a credit account with many readers with h is t memoir A Boy at...

John Foster LX: Memoirs of a Jugoslav Vane Ivanovio (Weidenfeld and Nicolson £10.00) Vane Ivanovic is one of the last Romantics diplomat, shipping tycoon and sportsman, he is...

Back in the USSR Ted Whitehead These notes are extracted from a diary I kept on a visit to the USSR as one o fa party of five British writers, the others being Brian Aldiss,...

Spaced out John McEwen Abstract art has tended to divide into the gestural and subjective and the geometric and objective. While the one does not necessarily cancel out the...

Muppet mania Richard Ingrams Wiii success spoil Fozzie Bear? The questio n must be asked in the wake of the award of the Montreux Golden Rose ° The Muppet Show, which beat no...