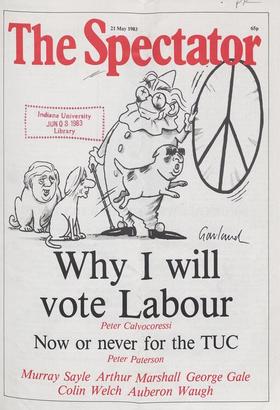 I t is possible that nothing will make most people strongly interested in the average general election campaign. It is enough for many just to go along to the polling station on...

A presidential election Colin Welch ShadoShado ws lengthening across the Oval, ws afternoon: 'They're just play- ing out time — I've got to go anyway: Shall we leave before...

T he Advertising Controller of the Independent Broadcasting Authority has pronounced: the Spectator is not allow- ed to advertise on television. This statement by Mr Harry...

Myth of the middle ground Auberon Waugh L o months ago, when the prospect of a une election was little more than a gleam in Saatchi and Saatchi's eye, the Daily Telegraph...

Murray Sayle Tokyo A s the third and greatest of the world As shambles into view, we can more or less make out the programme for Europe. Snow on their tracks, the endless...

Why I will vote Labour

Peter Calvocoressi T have voted Labour from 1950 and shall 1 do so this time with more conviction than ever before. I have two big reasons as well as a clutch of others. First:...

Now or never for the TUC

Peter Paterson T here always was only one person who could save the Labour Party from defeat at this election, and that was Mrs Thatcher. Labour's calculation, as specula- tion...

South Africa is still in unrest. The Basutos have broken out again, and are fighting each other, and President Brand has appealed to the Queen's Govern- ment to carry out the...

Richard West Plymouth I t has to be said that Dr David Owen, the former Labour Foreign Secretary now fighting his Plymouth, Devonport, seat as a candidate of the Social-...

Leanda Dormer "The vast majority of graduates who enter I the Foreign Office from university come from Oxford and Cambridge, and they have remained popular with MI6. At Oxford,...

The beauties of Belfast

Gavin Stamp T first visited Belfast, at the height 1 of the troubles in 1973. After a short journey from the ferry at Larne in a bat- tered train filled with frighteningly...

Napping a one-horse race Paul Johnson O h What a Lovely, Dirty War', pro- claimed the. Evening Standard last Tuesday, after the general election an- nouncement the day before;...

Ante-post betting Sir: Genial Jo Grimond's advice to 'not bother reading the opinion polls before 6 June' is like telling the punter at the track to close his eyes until the...

Sir: Mr James Hughes-Onslow did indeed visit me at the Monash University Centre for Human Bioethics, but there is not much else that is accurate about his report, 'Nine months...

Sir: The Spectator has had a high old time over the past three weeks at the expense of the Sunday Times. Indeed you have devoted almost as much space to Hitler's diaries as we...

Sir: 1. I am glad that Mr Wells agrees (Let- ters, 30 April) that Jonson's lines ... with three rusty swords, And help of some few foot-and- half-foot words, Fight over York and...

Wer hat so viel geld? George Gale Postwar: The Dawn of Today's Europe Richard Mayne (Thames and Hudson £10.50) I n the autumn of 1949 I found myself living chez Professor and...

Flappers at the flickers

Arthur Marshall Elstree Patricia Warren (Hamish Hamilton £9.95) Vew ups and downs in the entertainment world have been more pronounced and unexpected than those experienced by...

Jan Morris A Pictorial History of the Republic of China: Its Founding and Development Vols I and H (Modern China Press US $100) rlluttered as my brain is, after 30 years of...

Terence de Vere White Wi en I go back to Dublin, where I spent so much of my life, I don't have to remember; ghosts meet me on every street. Most of them I would not be paid...

ARTHUR MARSHALL is preparing an edition of letters and reminiscences

to portray the atmosphere of English girls' boarding schools and would welcome all contributions, to be copied and returned. Please send to Collins Publishers, do 25 Woodhayes...

James Hughes-Onslow The Crimes of the First Fleet Convicts John Cobley (Angus & Robertson £6.95). A register of petty offenders sent to New South Wales in 1787, including an...

Lasting qualities Giles Gordon The Trojan War Will Not Take Place (National: Lyttelton) rr he old that survive — classics, ancient 1 and modern — are likely, because of that...

Monsters Maureen Owen nyone who meets Yehudi Menuhin is immediately aware of his gentleness and charm. How undeserving, therefore, was the fate awaiting him when he appeared...

All passion spent Peter Ackroyd Passion ('15', Camden Plaza) T he characters in Godard's most recent film, Passion, keep on telling each other that they are not taking part...

Covered wagon Rodney Milnes Manon Lescaut (Covent Garden) T he Royal Opera's newish Manon Lescaut has been jumped upon from a great height by most of the heavy press, I...

Downcast Taki T always thought that when God created 1 dirt he meant it for earthworms, not peo- ple. As I grow older, however, and attend the kind of freak show I've just...

Death warrant Richard Ingrams I can never see Russell Harty now without thinking of the late jailbird Frank Norman and his generous offer once made to me to come out of...

Away from it all Jeffrey Bernard y comeback was unintentional and it's been a little disappointing so far. You could say it was forced on me. I called Into my ex-wife's...

Stalag Britain P. J. Kavanagh W hen town-dwellers fulfil a dream and go to live in the country (those who like it and can afford to stay — many can't stand it, and flee back...

No. 1270: Who and when? Set by Japistos: To offer you all a rest and some good entertainment I print below a remarkable poem I have discovered. A hef- ty reward will be given...

Cafe society David Spanier E very capital city should have one. And now London has again. I refer, of course, to a coffeehouse where the intake of refreshment, though of some...

A prize of ten pounds will be awarded for the first correct solution Opened on 6 June. Entries to: Crossword 608, The Spectator, 56 Doughty Street, London WC1N 2LL. 3 4 I5 I6...

I srael and Lebanon signed an agreement for the withdrawal of Israeli troops, to be implemented if and when Syria agrees also to remove its forces from Lebanon, President Assad...