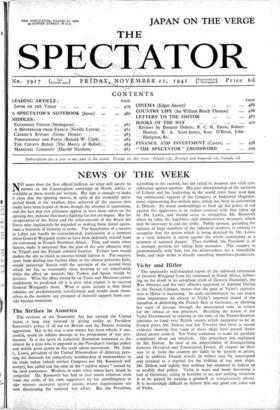 N O more than the first official bulletin on what will surely be known as the Cunningham campaign in North Africa is available as these words are written. But that is enough to...

The apparently well-founded report of the enforced retirement of General Weygand from his command in North Africa, follow- ing on the death in an aeroplane crash of General...

The Strikes in America

The revision of the Neutrality Act has carried the United States a long step forward in giving reality to President Roosevelt's policy of all aid for Britain and the Powers...

Religious Education in the Schools

The House of Commons has not many opportunities of dis- cussing educational questions, and still fewer of considering religious education. The debate which was opened by Mr. R....

Indians who were hoping for an announcement regarding the release of political prisoners at Delhi on Tuesday are not likely to consider the Secretary of State's speech at...

It appears that the apparently uncompromising Finnish reply to the American Note which described Finnish operations against Russia as " a direct threat to American security,"...

Shop Stewards versus Trade Unions In calling a half-hour's token

strike at certain shipyards and engineering shops in Clydeside last Tuesday, the shop stewards took action which can only tend to undermine the authority of their own trade...

In his speech at Middlesbrough last Sunday, appealing once again for more women to bridge the big gap in industry which must be filled, Mr. Bevin indicated new ways of...

The statement made by Nuri Pasha, the Prime Minister of Iraq, to Mr. Arthur Merton, the Special Correspondent of the Daily Telegraph at Baghdad, and published in Tuesday's issue...

JAPAN ON THE VERGE

A LL the indications suggest that war in the Pacific is con- siderably more likely than it was a week ago. There has been some tendency in this country to believe that Japan...

No doubt Lord Vansittart's new pamphlet, Roots of the Trouble

(Hutchinson, 3d.), will have a large sale, perhaps as large as its predecessor, Black Record. But I doubt whether it will be altogether effective. The average Englishman has no...

The University of Cambridge will make history on a minor

* * * * A letter in Wednesday's Daily Telegraph

on the predicament of an officer who sent his four children to America soon after his return from Dunkirk, contains statements so incredible that I withhold comment till an...

Mr. Birrell (I quote from memory), in referring to someone

who had quoted Thoughts in Prison, by the Rev. William Dodd, of Clare Hall, Cambridge, noted the omission of the information that the thinker in question was subsequently...

I have been sent a report of the second year's

work of the Friends' Ambulance Unit, composed practically, if not entirely, of men who have been granted exemption from military service on conscientious grounds, and have been...

A SPECTATOR'S NOTEBOOK I F it be accepted that the retirement

of Sir John Dill from military service on the day he reaches the age of 6o is for the benefit of the British Army, then the changes and promotions that follow consequentially no...

EXPANDING VISTAS By STRATEGICUS I N one of my earliest articles on the war I pointed out the overwhelming difficulty of foreseeing the course it might take because of our...

A MESSENGER FROM FRANCE

By NEVILLE LITTON [The Hon. Neville Lytton, a brother of the present Earl of Lytton, was a member of Earl Haig's staff in the last War.] S INCE I have landed in England, I have...

By GRANT DEXTER Ottawa, October. T HE war-effort of Canada is now entering the, phase of full production and by the spring of 1942 about 5o per cent. of our national income...

By RONALD W. CLARK T HERE has been an immense and dangerous increase in the production and sale of pornographic literature in this country during the last two years. It has...

By THE MASTER OF BALLIOL • T HE Headmaster of Bolton School, Mr. F. R. Poskitt, in his article in last week's Spectator, wrote that " in school hours the child as personality,...

By HAROLD NICOLSON I N the hall of the Café Royal the other day I met one of the younger and more gifted of our Labour politicians. He had come in from Regent Street and I was...

I do not regret, either, the passing of the social

habits which existed before 1914. I remember in the last war helping Monsieur Paul Cainbon into his brougham. He wore a grey top-hat, a grey frock-coat and yellow leather...

Thinking these not unpleasant thoughts I crept, with head lowered

against wind and rain, along the north side of Trafalgar Square The water poured in cascades from the roof of St. Martin's, and I splashed into puddles at the cross-streets....

Talleyrand, as we know, remarked that only those who lived

before the Revolution had any conception of how pleasant life could be. I have never experienced the slightest desire to live in. the eighteenth century. The formality of their...

Will such young men really be satisfied to become clerks

We assume today that the levelling process will continue with

increased momentum throughout the war, and that in the end we shall emerge as an almost classless State, resigned to a continuance of coupons and controls. I do not myself see...

utterly ruthless at this season with his Michaelmas daisies, even with the new and popular dwarfs. It is probably best to dig up and replant only one rooted stem. Reward comes...

Cats' Brains An authority on British place-names is a little perplexed by the intrusion, in several widely separated parts of the country, of the odd phrase, " cats' brains."...

What is a patriotic citizen to do when the birds come close to the house and demand largess? Feeding animals, whether dogs, cats or birds, is a difficult business in war-time....

More Green Thumbs An ancillary scheme for increasing gardeners and

through them the production of garden produce, has been successfully launched, and merits both publicity and support. A group officially named " The Women's Farm and Garden...

" The Common Touch " and " The Feminine Touch." At the Empire.—" Hatter's Castle." At the Plaza. IT is a somewhat ironic but a solemn fact that the film has always been close...

SIR,—Having spent a good deal of time in analysing the

real in- contistencies of the Soviet regime, I am glad to explain the apparent contradiction discovered by " Janus." The principle " from each according to his abilities, to...

A BRITISH BOY siR,—It is now thirteen years since the

scheme for sending British boys to spend a year in American schools was inaugurated by the English-speaking Union. It has always been the aim of the British and American...

" complains that the Sunday Times is not kind enough to some Germans aria Austrians who, in the guise of refugees from Nazi oppression; openly conduct Pan- German propaganda in...

SIR,—It seems singularly futile just now to contradict historical in- accuracies; but I am moved to protest against a phrase on page 469 of The Spectator, to the effect that the...

that Greek should have an assured place in the school curriculum, and showed how this could be achieved without ousting another subject, namely, by teaching Greek as the second...

DR. BENES AT ABERDEEN SIR,—I have a great admiration and

respect for The Spectator, and was much surprised to find a startling inaccuracy in your "News of the Week " of November 14th. You say that Dr. Benes outlined his peace plan for...

SIR,—May I be permitted to express my appreciation of the wise and imaginative approach to the problem of " The Unrecruited Women " as presented in the leading article in last...

SIR,—If you will permit me anther word, I would tike to re-emphasise that I have never questioned the necessity of basing planning, or any other action, on facts. My difference...

Sul,—The Daily Express has been making a big thing of Lord Beaverbrook's appeal to save every possible scrap of paper. When in London last August I was surprised to see frequent...

Sta,—Your correspondent, Mr. Woodhouse Smith, has voiced an opinion which

I have long held in saying that children should begin Greek first . and go on to learn Latin at a later stage. I think there is no question but that Greek is the easier language...

SIR,—In regard to the letter from St. Louis on " Milk for Children " in last week's Spectator, I cannot say definitely whether every ship that has been loaded from Canada or the...

Sus,—Few more touching episodes connected with the Navy have been recorded than the following. When the ' Ark Royal ' was tor- pedoed, and her doom certain, the crew was saved....

A LETTER BY MR. PICK

Stn,—The manner in which a letter to The Spectator sent by a dynamic person like the late Frank Pick may inspire useful action, is proved by the following facts: In your issue...

LIFE ON THE LAND

Sln,—The news that agricultural labourers are to have £3 in cash weekly draws attention to a skilled occupation open to all who desire to spend their lives happily in their...

Sin,—A few months ago the writer of your " Country Life " notes gave two suggestions for keeping tomatoes fresh, one being from a doctor-gardener who advocated packing the...

Strt,—It may not be much consolation to Miss Rose Macaulay, but we should like to assure her that there is no difficulty about replacing her Baedekers. We have ample stocks, and...

Sill,—The Spectator has always been friendly to China. Is not this the time to urge that the Allied Powers should try io give her some measure of war equipment, however small?...

The Political Milton Milton in the Puritan Revolution. By Don M. Wolfe. (Nelson. 25s.) Tins is a timely book, well worth wading through, since so much that agitated Milton's...

Lessons for the Future PROFESSOR BROGAN'S sub-title is " Some

Reflections on Foreign Affairs," and by way of a motto he quotes the Shorter Oxford English Dictionary's definition of innocence, beginning with " free- dom from sin " and...

Soviet Economy and the War. By Maurice Dobb. (Routledge. 3s.) MR COLE approaches his problem as one who is " not a Com- munist, but a West European liberal (with a small '1')...

Writes stir la France. By Louis Levy. (Edition Pingouin. 6d.) WHEN war broke out Rene Balbaud was bathing at Dieppe. His wife was in a nursing home overlooking the harbour...

A Lady's Child. By Enid Starkie. (Faber and Faber. Iss.) MISS STARKIE'S autobiography deserves praise for its powerful reconstruction of period, and its moving evocation of...

When We Build Again. A Bournville Village Trust Research Pub- lication. (Allen and Unwin. 8s. 6d.) WHAT a tantalising book! The result of three years' research into Birmingham...

THIS charmingly printed little book was first published in 1895

with an introduction by George Saintsbury, which is reproduced here. Saintsbury particularly commended its non-fortuitous con- junction of old and new. " I cannot imagine," he...

By CUSTOS NOTWITHSTANDING 100 per cent. E.P.T. and the war-time changes which have played havoc with the normal business and profit- earning capacity of so many companies the...

SOLUTION TO CROSSWORD No. 139 The winner of Crossword No.