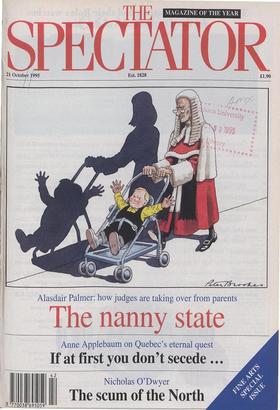 The permanent secretaries are preparing to demonstrate their permanence BORIS JOHNSON S o confident is Tony Blair of obtaining power in the next 18 months that he is already...

DAVID ENGLISH SNew York egregation or integration? For the first half of this century, America went with seg- regation, de facto in the North and de jure in the South. Then Mrs....

MOTHER, APPARENTLY, DOES NOT KNOW BEST

Alasdair Palmer reveals how the courts have now decided, in effect, that all British children belong to Her Majesty the Queen AS A RESPONSIBLE parent in a free society, you...

DRINK AND THE STATE Sir, — In his condemnation of both the national and private sale of alcoholic drinks to the public, Mr. Cecil Heath writes that the making of any profit out...

Will of the week Mrs Doris Ena WILKINSON, of Bal-

Anne Applebaum attempts to discover what Quebec nationalists really want Montreal `CANADA,' said the journalist slowly: 'We have lakes, we have mountains, we make cars, and we...

THE ENGLISH are a nation of shoplifters: a fact which, I suspect, explains their continued unswerving devotion to the National Health Service. They are moved not by abstract...

NOT JUST A YUPPIE FASCIST

I HAVE made a mistake. Such things can happen. It was when I was rabbiting on about the learned notes to the Everyman edition of Trollope's Can You Forgive Her? One note that...

THE SCUM OF WEST YORKSHIRE

Nicholas O'Dwyer investigates the basest of all criminals, those who prey on the old and infirm THEIR FACES glower down from the dingy office walls: broad noses, a lick of...

HOW TO BE BRITISH

Charles Moore diagnoses a national sense of inadequacy, and prescribes a traditional pick-me-up AT THE ROOT of most people's thought about politics in this country lies a...

It's not necessarily a sign of progress when chimneys disappear PAUL JOHNSON 0 ne institution which will not survive the new millennium is the chimney. I call it an...

Sir: I am grateful to Paul Ferris for his appreciative review of my Why Freud Was Wrong: Sin, Science and Psychoanalysis (Books, 14 October), but may I gently chide him for...

Sir: Piers Benn is right to praise the lucidity of Peter Singer's article (`Killing babies isn't always wrong', 16 September). Nevertheless, there are, it seems to me, two...

Sir: As an adoptive mother of two, I was appalled at the last sentence of Charlotte Roe's article on adoption. (`Adoption is never simple', 7 October). Speaking, I am sure, for...

Sir: Fascinating as it was to re-read Iain Macleod's seminal account CA question of loyalty', 14 October) of Lord Home's sur- prise 'inheritance' of the Conservative Party...

Sir: Gavin Stamp's delightful essay on the revival of the tram in urban transport (Not motoring, 7 October) very neatly captures the pleasure of riding on the stately vehi- cles...

Sir: I am a recent convert to your magazine. So complete has been my conversion that I obstruct railways to obtain a copy. Few outlets stock The Spectator in Not- tingham. The...

Sir: It is handsome of Mr Mortimer to write about Harrow, as he did in his review of Sir John Betjeman's letters (Books, 7 Octo- ber), being an old Harrovian himself, and it is...

Sir: In the same article (Portrait of the week, 14 October) you refer to Mrs Thomas Shep- hard and Mrs Peter Bottomley. Why do you persist in this out of date practice? You are...

The e-word that sends a shudder down the spine SIMON JENKINS Y ou can see it coming. James Naughtie or Sue MacGregor has some hapless defender of culture in their sights. The...

Rather a creepy saint

Rupert Christiansen RAYMOND WILLIAMS: THE LIFE by Fred Inglis Routledge, £19.99, pp. 324 here was something creepy about Raymond Williams, something marmoreal about his...

Michael Coren THE HISTORY OF MR WELLS by Michael Foot Doubleday, £20, pp. 317 T here is an anecdote concerning H. G. Wells that speaks volumes about the man and chapters about...

The biography and the memoir

The door. A man in camouflage fatigues, Bulldog Militia Insignia. He asks About Welsh families in our street and smiles, It's time for them to leave. Artillery Distorts the...

Only an overpriced yoghurt

Song of Innocence and Inexperience

Thus innocent and experienced, Those twins of self-regard Young Arrogance and Diffidence Died in their own back yard. While Diffidence thought Arrogance Inordinately proud,...

Giving simplicity unto the wise

Christopher Howse THE PLAIN ENGLISH GUIDE by Martin Cutts OUP, £10.99, pp. 162 A nother thing. Every sentence needn't have a verb in. And you don't have to con- stantly worry...

After the war was over

Kate Grimond CLEARED FOR TAKE OFF by Dirk Bogarde Viking £16, pp. 240 I t is unusual in any memoirs of an actor to find little mention of acting and only a modicum of...

Our revels now are ended?

John Spurling THE DANCER UPSTAIRS by Nicholas Shakespeare Harvill, £14.99, pp. 273 O f the many theories about William Shakespeare's true identity I have always liked best that...

The return of the monsters

Robert Cooper THE LOST WORLD by Michael Crichton Century Books, £15.99, pp. 393 H ere's yet another chunk of dino- mania to get our teeth into. The Lost World is the successor...

Art Drawing the line Bryan Robertson believes that drawing remains one of the most potent forms of art T here were marks on the walls of caves before there were words....

Dynasties: painting in Tudor and Jacobean England (Tate Gallery, till 7 January) Heads will turn Martin Gayford T he history of English sculpture in the sixteenth century is...

Gotterdammerung (Royal Opera House) Jenufa (Opera North) Perfect times ahead Rupert Christiansen I 'm not sure how much it's worth saying about the final instalment of...

Cut to the quick Robin Holloway B y a man's metaphors shall ye know him. The sheer vileness of Richard Little- john's images for Birtwistle's last-night-of- the proms Panic...

The Maitlands (Orange Tree, Richmond) Rat in the Skull (Duke of York's) The Master Builder (Haymarket) The agony of living apart Sheridan Morley An yone who cares, no matter...

Going global Ian Hislop T he only television I watched this week was while killing time in a hotel room. For a couple of hours during which I could eas- ily have read a book or...

A tragic tale Ti aki I first set eyes on Lady Sarah Curzon in Silverstone, during the British Grand Prix sometime in the late Sixties. she was the quintessential English rose,...

A certain triumph Gavin Stamp I n the park next to the Saratov (now Paveletsky) station in Moscow is a recon- dite little museum. Constructed in 1938, it houses the train that...

I can't compare you Jeffrey Bernard I was thumbing my way through one of my bedside books the other day — a rather odd collection ranging from Elizabeth David to Adrian Mole...

Killer looks Carole Morin M iddle-aged Englishwomen often look disappointed and dowdy. Rosemary West makes the skin crawl because of the crimes she has been accused of, but...

A question of loyalty Nigel Nicolson A politician who deserts his party and joins its opponents is regarded as a traitor by both sides. Although the whole aim of party...

Saving time Andrew Robson THERE IS an almost mystical excitement about a 'finesse', heightened by its name and the 50/50 gamble. Yet it is simply an attempt to make a trick...

Harry's Dolci THIS SPACE is just not big enough to give adequate attention to the subject of eating in Venice, not because there are so many places to recommend, rather more...

The long and the Short Raymond Keene KASPAROV HAS obliterated Anand in their New York world championship match. The score chart, given below, tells an interesting story and...

A first prize of £25 and a bottle of Graham's Late Bottled Vintage 1989 Port for the first correct solution opened on 6 November, with two runners-up prizes of £15 (or, for UK...

Nothing's impossible Simon Barnes IT WAS February, high on a hill where the wind bit and so did some of the horses, spooking at nothing and jumping and twist- ing to get out...

Dear Mary. . . Q. My parents were born on the same day and also married on their birthday. They have since divorced and are both happily remarried to other partners. One parent...