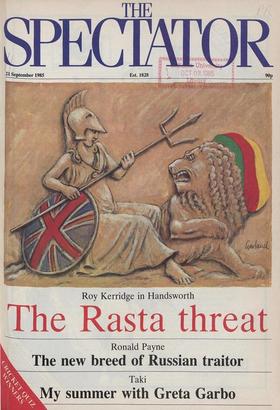 Spy Wars T he defection of Mr Oleg Gordievsky, KGB chief in London but for 19 years working secretly for the West, led to the expulsion of 25 Soviet spies from Britain. The...

PRESS reconstructions of Chinese political events often resemble the amazing feats of archaeologists who confidently deduce from one surviving piece of mosaic that the whole...

DEALING WITH THE KGB: .. „ W hat lessons should be learned from the two successive but contrasting espion- age affairs which have covered first West Germany and now this country...

Commando Ashdown dives for cover FERDINAND MOUNT Dundee o to all the conferences, do you?' said the man in the top bunk with the droopy moustache. 'Were you at Torquay for the...

U ndoubtedly the rummest twist to the Gordievsky affair has been the allegation by Mr Ron 'Afghan' Brown, MP for Leith, that Mrs Thatcher had been using the KGB's London boss to...

Time to ask what is happening to the English AUBERON WAUGH Not so much any damp-eyed, unrecipro- cated love for the brutal enslaved Rus- sians, slippery Poles, bouncing Czechs...

THE MEN BEHIND THE HANDSWORTH RIOT

Roy Kerridge on the division between Birmingham's blacks and Asians and the fear that they share Handsworth TWO days after the worst rioting Hands- worth had ever known, taxi...

Rowlinson Carter overhears verdicts of the public bar on blacks and Asians THE commission of inquiry into the Handsworth riot, as conducted in a Lon- don public house, boiled...

Ronald Payne on the seduction of Soviet agents by the values of the West ONLY when a big event takes place is it possible for outsiders to peer under the cloak of espionage...

Christopher Hitehens on the surprising silence of the United States over a celebrated Soviet prisoner Washington THE Russian embassy here is housed in a spanking mansion on...

HIS PICNICS HOLD THEIR HORRORS

Travellers: A profile of Eric Newby, brilliant survivor of mishaps IF, INSTEAD of finding ourselves in our usual seat on the Clapham omnibus, we armchair travellers were to...

Subscribe NOW and save up to 25% on the retail price (equivalent to 3 months FREE) Subscription rates are being held at the old price for a limited period only. Take advantage...

Your fellow Spectator readers are advertising on pages 42 & 43

LIGHT upon Lucas, which hoisted its share price by giving itself a holiday from contributing to its pension fund (City and Suburban, last week). Bob Chadwick of Duncan C....

When Plymouth Argyle plays Manchester United, don't let Buggins referee CHRISTOPHER FILDES I wish John Walker-Haworth all success, but we must be thankful that his name is not...

MY polymathic friend Michael Von Clemm has excelled himself. He is chair- man of Credit Suisse First Boston, leader of the international bond market. He has earned the robes of...

IT WAS obvious a year ago, or certainly to this column and its readers, that Thames Television ought to come to market. So, now, it will, next spring. That was what the...

Sir: I know there is a school of thought which maintains that great works of litera- ture are universal, but surely Katharine Whitehorn (Diary, 24 August) can be forgiven, even...

Sir: I do not understand why there is suddenly all the flagellation of poor Christ- opher Hitchens for his coverage of Amer- ican politics (Letters 10 & 24 August). Seen from...

Sir: In all the clamour about Aids, the virus responsible for this dreadful disease, may, suitably modified and attenuated, prove to be the most effective immunosuppressant know...

Sir: I knew Vanessa Ayer best when she was Vanessa Lawson and thought of her instinctively by that name. Peregrine Worsthorne doesn't think of me instinc- tively by the name...

Sir: It is refreshing to find total, blank ignorance posing as punditry, and your remark 'But understanding that Esperanto suffers from a dearth of original literature' is a...

Sir: The day I read the article by Vladimir Voinovich ('Soviet anti-Soviet propagan- da', 24 August), quoting the Soviet slogan 'You're on the right road, Comrade', I opened an...

Sir: Dhiren Bhagat's article 'Auschwitz for the Chickens' (31 August) dealt with the need for serious consideration of the moral issues arising from both vivisection and...

Animals, like men, have continuous destinies, and 'Jumbo', the great elephant, had his. It was his destiny to attract more attention than any other elephant which ever existed,...

T he diary which Samuel Pepys kept from January 1660 to May 1669, amount- ing to a million-and-a-quarter words, is one of our greatest historical records and, in its way, a...

Puffed up with conceits

Margaret FitzHerbert A MAGGOT by John Fowles Cape, f9.95 J ohn Fowles is a great story-teller and a master of the English language but he is cursed with a tedious and...

An entangled cow preferred to heroism

Patrick Marnham PEOPLE AND PLACES by Richard Cobb Oxford University Press, f12.50 I n the army of historians he is a scruffy lieutenant permanently on retreat from Moscow. He...

The brittleness of the bourgeoisie

Angus Wolfe Murray ONE IS A WANDERER: SELECTED STORIES by Francis King Hutchinson, f9.95 F rancis King performs like a master of the nauseous nudge. Molten nipples are...

Nichol Fleming PARADISE POSTPONED by John Mortimer Viking, f9.95 H ats off to John Mortimer. He's gone and done it again! His new novel is a hugely enjoyable saga set in the...

Inertia: prop your feet up and meditate instead of cleaning the sink out or trying to overthrow the state. Inertia: picture armies stretching and yawning and failing to get up...

David Ekserdjian ALESSANDRO ALGARDI by Jennifer Montagu (Yale, f65) I t is Algardi's tragedy to be regarded as the poor man's Bernini. Their names may not be as inextricably...

Echo and Narcissus Julie Kavanagh C an Michael Clark, tedeckt, ornate and gay' like Milton's Delila (clad at one point like a priapic, half-naked nanny) be taken seriously? And...

One confusion after another Ursula Buchan I do not know much about Harley Granville-Barker. If asked, all I can say is that he was an Edwardian actor, producer and playwright,...

La Vie Parisienne (Scottish Opera, Glasgow) Splendours and miseries Rodney Milnes I fail to understand the grudging, even condescending reaction of most of the critics to the...

Cocoon (PG', Odeon Leicester Square) The oldest tradition Peter Ackroyd I t sounds as if it ought to be a warm and comforting film, and in the event it does not disappoint...

Cruising with Greta Taki T his is Garbo week, so I may as well get my two bits in about a lady of whom one Paul Rosenfield writing in the Los Angeles Times said: 'What you see...

Head to come Alice Thomas Ellis T he maxim 'When all else fails read the instructions' is not necessarily as sensible as it seems at first sight. For instance, with some...

The learning process Jeffrey Bernard I have just been made more than usually aware of what a lousy education I had by the presence in my flat of two of my landlady's nieces...

Since the stone age P.J. Kavanagh H igh on the hills above Siena, the line is precise, begin the forests of spanish chestnuts; below them but still high up about 600 metres —...

A fter his fine start Gary Kasparov appears to have cracked up and is omi- nously losing the kind of game which cost him so many points during the disastrous first nine of the...

But for... Jaspistos I n Competition No. 1387 you were in- vited to provide an extract from a journal- ist's interview with an elderly Chatterton, Keats, Jane Austen, Rupert...

04 0MOPLiati IT'S acceptable from aunts of advanced years, not necessarily one's own, anyone's aunts, even aunts who are not really aunts. A good half of the aunts I know do it,...

Competitors are invited to expand and retell a nursery rhyme (please specify which) in their own poetic manner, supplying a surprise, untra- ditional ending. Maximum 16 lines....

Solution to Crossword 723: Evens out