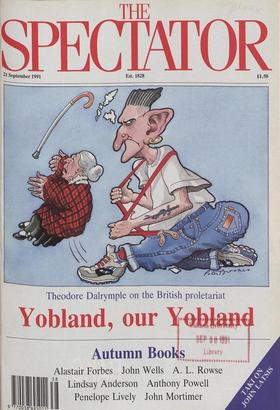 `OK, luv, we'll let you know.' O pinion polls favourable to the Tories increased the pressure on Mr Major to call a general election for November. Unem- ployment rose by 59,000...

The clever Tories who are far too clever to have any new ideas NOEL MALCOLM A t Conservative Central Office on Tuesday, ten whizz-kid Tory prospective candidates were...

S tress, one is told, is caused by the inability to say No. And I have unwittingly coincided working for The Spectator with our first family holiday since 1980. Forget- ting how...

We must choose between the fat archdeacon and the thin archbishop CHARLES MOORE U nlike the Psalmist, the Archbishop of York takes no pleasure in marrow and fatness. When his...

Theodore Dalrymple gives his medical report on the moral and cultural wasteland of modern England I LIVE in a wasteland. In the council estates, the glass of many of the...

Anne McElvoy believes Europe should face up to the necessity of taking sides in Yugoslavia Zagreb THE MEN in white are variously com- pared to ice-cream vendors, the crew of a...

Michael Lewis on a town which symbolises the richest and worst in American society Aspen ASPEN, Colorado, is one of those white, middle-class American towns where ignor- ance...

THE SAD DECLINE OF A STATELY PILE

Andrew Lycett on why the Government should admit its error and buy back Heveningham Hall FROM the front door of Huntingfield Hall, her solid 18th-century farmhouse in Suffolk,...

William Cash on-the renewed promiscuity of homosexuals unafraid of Aids YEATS's view that sex and death were the only subjects worthy of adult consideration appears not to be...

MORE THAN BRICKS AND MORTAR

Anatole Kaletsky debunks some received ideas about the property crisis A FUNNY thing happened to John Ma- jor's Britain on the way to the property- owning democracy. Property...

Lend me your moisturiser, old girl PAUL JOHNSON P erfume for men has arrived', states an ad in the current issue of Tatler. A poll taken by Faberge suggests that men are...

Poll-struck City gets a lick and a promise and my fiver gets the fever CHRISTOPHER FILDES E lection fever rages in the City, and making a market in polling dates is the...

IF YOU find yourself spending the night in your local jail, or trying to collect your ,council's tax, or riding shotgun in a squad ;car, then you will have been caught up by the...

SOMEONE looking remarkably like the man from the Pru has dumped 22 million shares in Royal Insurance. I now hope to see the Royal dump its shares in the Prudential. These...

THE TWO noble bidders at Hanson have excelled themselves. Bidding for Beazer, they pick up a company at its last gasp under the burden of debt, and priced accordingly. It is...

I AM delighted to learn that the City's senior banker has been honoured for his services. He is not, as you might think, some aging Baring or supernumerary Barc- lay. Kung Chao...

Sir: Noel Malcolm (Letters, 7 September) evidently feels so strongly about Yugoslavia that he is unable to respect facts or the ele- mentary courtesies of debate. For example,...

Sir: It is unfortunate that you choose to belittle the force of your arguments by reg- ularly inserting snide references to John Major. To suggest ('Fever Breaks Out', 7...

Sir: Sorry to disagree with Sir Raymond Carr on the subject of Spain (Books, 7 September), but it is not true that bullfight- ing is no longer popular among Spaniards. Nor is it...

Sir: I am collecting material for a memoir , of Arthur Hungerford Pollen the naval his- torian and inventor, who died in 1937, and would be grateful for any letters or recol-...

Sir: From the disadvantage point of the Irish Republic, one read with wry amuse- ment William Cash (Thermometers and what-not', 7 September) on your relatively small Roman...

Sir: Mr Barton's cartoon (31 August) is, to say the least, idealistic. Delving into the depths of my memory I can not remember having seen a single telephone directory, let...

Sir: It seems as though poor Mr Lewis just cannot win. On the one hand his earnings are threatened by the prospect of a rapa- cious Labour government (`Sixty per cent of...

Sir: One is naturally grateful when, at the age of 97, one is resuscitated, or nearly. This service you have rendered me in your article 'Snatch of the Baltic' (7 September). I...

Sir: Geoffrey Wheatcroft, in his fairminded review (Books, 7 September) of Tony Palmer's book Menuhin, A Family Portrait, refers to Zanina's and Jeremy's grumbles. In fact no...

Alastair Forbes WELL, I FORGET THE REST by Quentin Crewe Hutchinson, f17.99, pp. 278 I n 1952, six years after coming down from a distractingly hedonist Cambridge, knowing only...

Who's play is it anyway?

John Mortimer THE MOSCOW ART THEATRE LE'l'IERS edited by Jean Benedetti Methuen, £20, pp.377 T his is a chronicle of the enthusiastic cooperation, the arguments, the rivalry...

Laughter and the love of friends

Between insulin and the big- bosomed nurse

Poetry amid the battle

Penelope Lively UNDER EGYPT'S SPELL: THE INFLUENCE OF EGYPT ON WRITERS IN ENGLISH FROM THE 18TH CENTURY by Mursi Saad el Din and John Cromer Bellew Publishing, £18.95, pp. 254...

You and Whose Army?

They gave him his part in the school play at Christmas And smiled when they told him 'You won't need to practise And surely your Dad has a velveteen waistcoat And won't you be...

Lying down with the kid

With Jane Austen as patron saint

A.L. Rowse W hen James Joyce died in 1941 T.S. Eliot wrote a letter to the Times to protest against the inadequacy of its obituary notice. Courteous as always, he proposed `one...

Candid not only to camera

Lindsay Anderson ME: STORIES OF MY LIFE by Katharine Hepburn Viking•, £16.99, pp. 418 I f you were asked to describe in a single word the unique quality of Katharine Hep- burn,...

A cry, a crash, and a vengeful shout From the street below; and I have written: The mountains had to start somewhere, so why not Immediately rising out of flat fields Where the...

Chronicles of an imp, not the devil

Philip Glazebrook OF LOVE AND ASTHMA by Ferdinand Mount Heinemann, £13.99, pp. 320 T his successful and amusing novel recounts from the point of view of its sardonic narrator...

Exhibitions 1 Once was enough Giles Auty The Pop Art Show (Royal Academy, till 15 December) Objects for the Ideal Home: the Legacy of Pop Art (Serpentine Gallery, till 20...

It's Japanese, but is it art? Kate Berridge experiences the darker side of Japanese society 0 ur latest Japanese import is Japanese culture itself, packaged in the form of a...

Story of a symphony Robin Holloway T he two largest novelties in this year's Proms were a symphony and a piano con- certo. It is interesting to see how the con- cert hall's...

Three Birds Alighting on a Field (Royal Court) Lost in translation Christopher Edwards T he Almeida Theatre continues its ambitious season with this version of Euripides'...

Life Stinks (`12', Odeon Haymarket) Trust (`15', Cannon Chelsea) Uneasy laughter Harriet Waugh N ot every film can be a winner even when from a master of the comic art and...

Where charity begins Taki Mykonos w aswas not surprised to read that John Latsis has given £2 million to the Conserva- tive Party to help smooth its cash crisis. Here's a man...

Lonely hearts Martyn Harris A idrew Davies has been around for donkey's years. He was writing for televi- sion in the days when Dame Edna was still funny and Sir Robin Day...

Biter bit Jeffrey Bernard A friend of mine, a journalist and nov- elist, has taken it upon himself to write a biography of me. I am not quite sure how I feel about the...

Family trees Zenga Longmore T hanks to the gift of some charmless `My Little Pony' toys, Omalara has discov- ered the art of playing quietly by herself. Sitting on the floor,...

Latvian legend Raymond Keene L atvia occupies a position of great importance in the cultural history of chess, so this week 1 shall be celebrating that country ' s...

12 YEAR OLD SCOTCH WHISKY COMPETITION cluVAS REGA 4 Banjo dreams Jaspistos I n Competition No. 1694 you were in- vited to add three fantastic, boastful sestets to one of...

There are some journalists who, one sus- pects, were not present at the scenes they describe, whether covering a local war or playing a round over the latest chic golf course,...

Putting traumas Frank Keating WHATEVER the whispering sages say from the commentary boxes, and for all the back-page acres of newsprint which will be devoted to every...

Q. I am a 34-year-old bachelor. Because I am supposed to be eligible, I am always being asked by women I meet at dinner and drinks parties if I am married and if not why not. I...