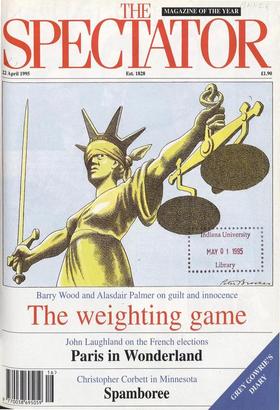 Sleepy Hollow M r Gerry Adams, the President of Sinn Fein, gave it as his opinion that the Irish Republican Army would not give up its arms, perhaps ever; but he accused the...

GREY GOWRIE S pring has been cold and dry where we live in the foothills of the Berwyn moun- tains. I cannot remember it more beautiful, like some exile's imagination of spring....

If Mr Major can persuade people to count their blessings, this Tory Government might be re-elected CHARLES MOORE G athered together in the country to celebrate the festival...

BALANCING THE SCALES OF JUSTICE

THE FEAR WHICH DARE NOT SPEAK ITS NAME

Christian Caryl exposes Germany's biggest political secret: no one wants monetary union Berlin IT IS a placid Saturday evening in April 1995, and the German television...

John Laughland points out that France's two right-wing presidential candidates are divided by their tastes in detective novels, not by policies Welcome to the looking-glass...

persist.. . I WAS listening to Radio Three on my way to work last week. It is the only radio station I ever listen to, not only because of the music, but because it is entirely...

AN IMAGE RETHINK COULD HELP

Martin Vander Weyer observes the passing of CND, a great British institution MARGARET THATCHER wrote of Michael Foot that 'if I did not think it would offend him, I would say...

I WAS pondering, over a morning cup of coffee, the quirks of history which led the Spastics Society to change its name to 'Scope, for People with Cerebral Palsy' at about the...

Keynes's arguments against the Versailles Treaty were inspired by the Germans themselves, says Niall Ferguson in an extract from his new book If we aim deliberately at the...

Don't bother about the party, just take me to your leader PAUL JOHNSON R ecently I wrote an article in the Evening Standard praising Tony Blair and contrasting his virtues...

Looking for a loser in the French Grand Prix we could all do with a breather CHRISTOPHER FILDES M y selfless researches in the Longchamps area over Easter show how far the...

Sir: The case for making Members of Par- liament carry identity cards is overwhelm- ing in view of their treacherous behaviour over the past 25 years. We need to know who they...

Sir: If the corporate barons are pillaging their fiefdoms and at the same time the Church is in dire financial straits, isn't it time for the Crown to curb these over- mighty...

Sir: I am very surprised that Simon Jenkins, that well-known exposer of phoney govern- ment statistics, should have fallen for the figures which the Treasury claims are need- ed...

Sir: Paul Johnson's case (Another thing, 1 April) for reclaiming the 'purloined' word gay is specious: for while the term for gays remains in flux, his real target, the...

Sir: I am fed up with the assumption that the Community Charge was an ill-advised tax, and reading comments to that effect in The Spectator (Books, 8 April). In Scotland the...

Sir: As a perfectly normal working-class, left-wing, agnostic homosexual, I enjoy your organ each week for the sense of re- assurance it gives me in reinforcing the ver- ity of...

Sir: There is no need to play games of `what

if' in order to determine the response of the British people to a Nazi occupation (What did you do in the occu- pation, Daddy?', 8 April); we need only examine what has happened...

Sir: The widespread, often vicious anti- Semitism in this country in the Thirties and Forties, exemplified, for example, by the popularity of 'Sapper's' novels, became...

Thoughts for the day

Sir: Mr A. N. Wilson claims, in his article `Origins of the empty tomb' (15 April), that St Paul introduced the idea of drinking the blood of Christ, but surely this was...

Out in the cold

Sir: Your leader (8 April) encourages pub- lic sector workers to take a pay freeze. As a GP I would be delighted to, as long as I also had a work freeze. In the meantime, I...

Sir: From the midst of the bromides and nebulous logic of Mr Tony Blair's article (The Spectator/Allied Dunbar lecture, 25 March) one idea shines through: 'Duty is the...

Sir: Why is the end of the world virtually an

unmentionable subject? Perhaps it is, in part, because so many, over several cen- turies, have got it wrong. Mather reason for the taboo is, without doubt, the popular view that...

Sir: Tabitha Troughton Match out, there's a granny about', 15 April) seeks to replace one set of tendentious nonsense with another. Simply because she knows half a dozen...

Strangest of geniuses A. N. Wilson PETRUSHKA AND THE DANCER: THE DIARIES OF JOHN COWPER POWYS, 1929-1939 selected and edited by Maureen Krissdottir Carcanet, £25, pp. 340 I t...

Kevin Myers REBEL HEARTS by Kevin Toolis Picador, £15.99, pp. 371 I t was, I suppose, inevitable that some- body sooner or later would do a Rian Malan on Northern Ireland, a...

A brute, a cheat, a traitor etc

Nigel Spivey TOM PAINE: A POLITICAL LIFE by John Keane Bloomsbury, £25, pp. 644 A brute to his wife, a cheat to his trust, a traitor to his country, reviler of his God and of...

Not troops but tourists

Dusty purlieus of the law

Gulls us with intelligence

Francis King HEART'S JOURNEY IN WINTER by James Buchan Harvill, £14.99, pp. 201 T he protagonist and narrator of this thriller, Richard Fischer, describes himself as 'a...

The Centre cannot hold our Michael

Paul Barker THE STORM IS PASSING OVER by Roy Kerridge Thames & Hudson, £12.95, pp. 175 A frica has come to London. Go down from the Elephant and Castle, along the Old Kent...

Helen Osborne IN THE FIFTIES by Peter Vansittart John Murray, £19.99, pp. 256 W are all too young to know if the Nineties were Naughty, but did the Twenties Roar or the Sixties...

The Root is Man

Young British Artists IV (Saatchi Gallery, till 25 June) Lost generation Giles Auty I i art today, much of what goes on has become beyond parody. A spoof Saatchi show with a...

Muriel's Wedding (`15', selected cinemas) A touching disaster Mark Steyn A Australia goes, so goes its cinema. Not so long ago, its motion pictures were raw and rugged and...

Dance Umbrella (16 March - 2 April) A little coup in Woking Jann Parry W oking's claims to fame are the size of its cemetery and shopping centre and the frequency of its...

Hit corn Ian Hislop I am not usually a fan of men with beards billed as 'cultural historians' but I will have to make an exception in the case of Professor Jeffrey Richards....

Down with cry babies Jeffrey Bernard T he Americanisation of this country and probably the rest of the world is becoming more and more sickening. The cult of phys- ical fitness...

Red hot tales Taki New York A bout ten years ago I wrote in this space that 'Armand Hammer is a billion- aire, an art collector, a friend of Prince Charles, an intimate of...

Hotel supreme Nigel Nicolson T he most expensive hotel I have ever stayed in was the Bel Air at Los Angeles, and the University was paying my bill. It was so grand that my...

Holiday with a gamble Holly Budd There were one or two sceptics and con- scientious objectors but I soon had 23 com- panions in hope and folly. The objector who most surprised...

I HAVE being going off Gary Rhodes. All that swaggering

cheeky chappism, that one- of-the-boys posturing is beginning to pall. In the beginning he appeared rather as the Nigel Kennedy of the kitchen, only more like- able. Now he...

Discreet rules Andrew Robson DO artificial conventions (bids that don't mean what they sound) really assist? The most widely played convention is 'Stay- man', where a bid of...

Open and shut Raymond Keene THERE IS A WIDESPREAD misconcep- tion that it is only the open games that can lead to slashing attacks. Many people believe, erroneously as it...

I SISGLE MAO SCOTCH &MP Periphrastic Jaspistos IN COMPETITION NO. 1877 you were invited to give an amusingly periphrastic account of a simple, straightforward action....

Malvedos 1979 Vintage Port for the first correct solution opened on 9 May, with two runners-up prizes of £15 (or, for UK solvers, the latest edition of The Chambers Dictionary –...

Culture shocks Frank Keating IN A matter of days, Rupert Murdoch's promise of millions has so detonated the game of rugby league that by the time you have arrived here the...