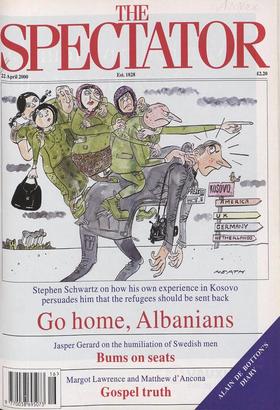 The Red Nile M r Vladimir Putin, the President of Russia, flew in for tea at Windsor with the Queen and talks with Mr Tony Blair, the Prime Minister. Mr Putin defended Russian...

I f you want to get a film made in Holly- wood, you have to be able to say what it's about in under ten seconds. 'It's Apocalypse Now meets Forrest Gump,' Hollywood agents will...

The government was right to discard its ethical foreign policy BRUCE ANDERSON T he press conference did not go according to the PM's plan. It was intend- ed to be a triumph...

THEIR COUNTRY NEEDS THEM

Stephen Schwartz on how a disturbing encounter with a ruthless Albanian family in Kosovo convinced him that most of the refugees should be sent home FIRST, some disclaimers: I...

KILLED FOR BEING WHITE

Now that white farmers in Zimbabwe are officially 'enemies of the people, Ben Brown fears a blood-bath Harare `AFRICA is a continent for black people.' The message was clear...

In last week's edition of The Spectator we published an article which implied wrongly that Jack Cunningham had received payment from the nuclear industry. We accept that such an...

IN an interesting and practical letter about pole-axes, a reader from Harrow, G.K. Connelly, asks in passing if I can recommend a good single-volume dic- tionary. That is...

Jasper Gerard on how Swedish feminists are plotting the final humiliation of the male sex organ MEN for whom sexual awareness came via Scandinavian exercise videos might...

THEY DID NOT GROW OLD

The fifth Earl of Longford died at Gallipoli 85 years ago. His great-grandson, Harry Mount, describes that terrible campaign EIGHTY-FIVE years ago, my great- grandfather, the...

HEAD IN THE CLOUDS

Margot Lawrence on how modem science corroborates the truth of the Ascension of Jesus into Heaven THE most important of all the Church's festivals, I was told as a child, is...

CALL ME A BOVINE CONSERVATIVE

Matthew d'Ancona on the howls he provoked from theologians by claiming that the gospels are a reliable historical source `ANCIENT writers sometimes meant what they said, and...

South Africa treats sport with a religious Hansie Cronje is regarded as a Judas HANSIE CRONJE's fall from grace is one of the most unpredictable sporting results in decades;...

Oh, to hold a children's egg-hunt on Easter Island! PAUL JOHNSON W hen Boswell went to see Dr John- son at breakfast on Good Friday 1783, he found him `in his usual manner...

We losers of Munich

From Mr Michael McAllen Sir: May I reassure Penelope Marland (Let- ters, 8 April). She need not worry that her late father, Richard Lamb, died without hav- ing the last word in...

From Mr Philip Warner Sir: Mr Clive Wright (Letters, 15 April) inquires by what criteria the Somme and Passchendaele were judged victories. The Somme removed the Germans from...

From Mr Robert Leader Sir: It is somewhat unfair of Mick Hume (Another voice, 8 April) to accuse left-wing liberals of reneging on their principles. His LM magazine has, after...

From Mr Patrick Oakley Sir: Kirsten Sellars identifies yet another honeypot for lawyers (`How to make a killing out of human rights', 8 April). While I was in transit through...

From Mr Glyn Ford, MEP Sir: Roger Scruton is his own worst enemy (Don't let Blair ruin it', 1 April). His defence of English patriotism threatens to decimate its own supporters....

From Mr Robert Jackson, MP Sir: I thought Stephen Glover was one of the grown-up school of journalism until I read his piece last week on Zimbabwe (Media studies, 15 April), the...

JON MOULTON of Alchemy plans to revive the dog formerly known as Rover by selling MG sports cars in America. He thinks there is an unsatisfied appetite for them. I refer him to...

The cost's in code

A SALVO from Greville Howard, the code warrior and boardroom resistance fighter. `The new code writing industry,' he tells his shareholders at Fortress Holdings, `has proved so...

THOSE heated swimming-pools in stock- brokers' gardens all along the North Downs are (so its historian, Margaret Reid, said) the most visible legacy of Big Bang. It just goes to...

INVESTMENTS from the old economy do not come any older than gold, which can fair- ly claim to be the oldest investment of all. It can also claim to be outperforming the new-...

THERE is (or there was) a dot.com mil- lionaire who takes his socks home to be washed. Not just out of meanness, either. He is paper-rich but cash-skint. In theory, his business...

Easy come, easy go if the trend is your friend you can go round the bend CHRISTOPHER FILDES B ertie Wooster's Aunt Dahlia knew how to get her way: 'Good old blackmail. You...

The several faces of socialism John Vincent W e have more centenaries on hand than we know what to do with. The cente- nary of Ruskin's death in January caused little stir,...

In blood stepp'd in so far

Samuel Brittan T here could hardly be a greater differ- ence in approach between Tim Judah's book on Kosovo and the one produced by the Cato Institute. Judah has covered the...

Nothing to lose but his chains

Paul Johnson THE NEW CENTURY by Eric Hobsbawm, with Antonio Polito Little, Brown, £16.99, pp. 176 T his is a curious little book of 176 pages, including index. It appears to be...

How not to do it

Transplants that failed to flourish

The Red Hand of Ulster

SPECTATOR BOOK OF THE WEEK

Peter Carrington DELIVER US FROM EVIL by William Shawcross Bloomsbury, £20, pp. 404 M ost of us will remember the mis- placed euphoria which followed the col- lapse of the...

Robbie Millen EASTER J ust as London Transport would grind to a halt if its black staff were to leave, if all the homosexual clergy were to sashay off to San Francisco, the...

Suffolk's feast of spirituality Andrew Lambirth goes on an art journey through the county uffolk is a county liberally gifted with churches. Now, to celebrate 2000 years of...

Triumph of team-work Michael Tanner T o judge from the notices of the first night of the LSO's two performances of Strauss's Ariadne auf Naxos, those of us who attended the...

Running on empty Mark Steyn A merican Psycho is being touted as an anti-adaptation: This is not your father's American Psycho. No, sir. Bret Easton Ellis's 1991 reviled...

Sacred planting Ursula Buchan W en listeners to Classic FM can request a piece of sacred choral music 'because it is so romantic' without exciting comment, you know that the...

Fact and fantasy Michael Vestey A re we an apathetic people on the whole? The way we allow ourselves, or our chosen rulers, to roll over and compromise. I'm not just thinking...

Fleeting happiness James Delingpole some time now, I have been feeling For messed up and disillusioned about pretty much everything. My new house is an utter toilet and I now...

Soaked through Robin Oakley A the bard has him do, Antipholus was lamenting in the RSC's Stratford pro- duction of A Comedy of Errors last Satur- day night, 'I to the world am...

Intellectual exercises Taki Boston This town got lucky back during the Fifties when the good old Irish boys who ran the city drove it to bankruptcy. Real- estate sharks stay...

Going, going, gone Toby Young T hree months ago, when I moved back from New York to live with my girlfriend on a 'trial basis', I deliberately didn't have a leaving party. It...

Hunting at Easter Leanda de Lisle 0 ur daffodils have been completely flattened by the dog. Every morning our labrador rushes straight through their proud stems, running from...

Hands off Andrew Robson THE RECENT Transnational Teams, held in January alongside the Bermuda Bowl, attracted many of the world's greatest stars. The biggest criticism of the...

THE last offer from Heyman, Barwell Jones of Ipswich was in April 1999. It was com- posed entirely of French wines and very popular indeed they proved to be. This time, however,...

EATING in London is such an extreme business. You can get good food, yes, but, goodness, how you have to pay for it. And I don't just mean the final bill. Actually, it's not...

100 years on Jaspistos In Competition No. 2132 you were invited to imagine that Oscar Wilde's Lady Bracknell walks down Oxford Street today and writes a letter describing the...

CHESS dbe4 www.ardbeg.com Level score Raymond Keene GARRY KASPAROV is exceptionally well known to the chess public, having been champion since 1985. On the other hand,...

CROSSWORD 1460: The Azed crossword by Doc

A first prize of £30 and a bottle of Graham's award-winning, Late- Bottled Vintage Port for the first correct solution opened on 8 May, with two runners-up prizes of £20 (or,...

`Come live with me, and be my love...' sang Marlowe's Passionate Shepherd. You are invited to supply, in the same metre, a present-day cynic's reply (maximum 16 lines). Entries...

Mutiny over the bounty Simon Barnes YOU hang mutineers from the yard-arm. The fate of captains mutinied against is more obscure, but equally devastating. They tend to get...

Dear Mary. . Q. Apropos the power of nutmeg as a mood-altering substance (Your problems solved, 15 April), if I.H. wishes to further enhance his image as an expert on these...