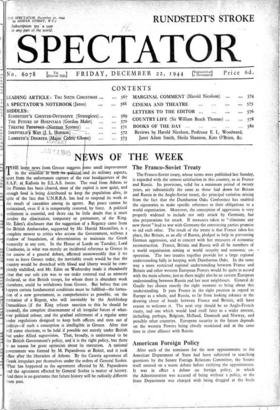 news from Greece suggests tome small improvement in the ;in.ilZilitirlsottr - its-palitical and its military aspects, apart from the unfortunate capture of the rear...

The Franco-Soviet treaty, whose terms were published last Sunday, is regarded with the utmost satisfaction in this country, as in France and Russia. Its provisions, valid for a...

After each of the nominees for the new appointments to the American Department of State had been subjected to searching questions by the Senate Foreign Relations Committee, the...

The debate on Foreign Office Reform initiated by Lord Perth in the House of Lords last week served a very useful purpose. As private secretary to more than one Foreign...

The process of evolution in the practice of democracy in British colonies is significantly illustrated in the example of Jamaica. The island's new constitution provides that...

The military operations in Burma, which get less than their share of attention in the Press and on the wireless, not only cover a vast area, but engage large numbers of troops,...

A pamphlet on Community Centres just issued to local authorities by the Ministry of Education opens with an essay on " the needs and uses of leisure." It might be supposed that...

There is going to be trouble about " spitchered." The

author of the recently published official booklet on Malta says the word is RA.F. slang, and denotes anything completely smashed up ; it is even added that it comes from the...

It is a strange coincidence that there should be such

a mortality among well-known writers—Philip Guedalla, Robert Nichols and Francis Yeats-Brown—within a week. Major Yeats-Brown was at one time assistant editor of this journal....

47o acres attached, to the National Trust, Dr. Ralph Vaughan-Williams has saved from desecra- tion one of the fairest slopes in Surrey. The estate is within easy reach of...

T is curious that on the day on which the death of Philip Guedalla was reported the Washington Post should have used (in connexion with American foreign policy) the phrase "...

I said last week that I should discontinue importunity regarding

the Malta Shrine of Remembrance Fund, but that is no reason for- not stating facts. And the facts are (i) that the number of sub- scribers to date is r,000, and the total...

Mr. Seymour Cocks has summed up a horrid picture of

mutilated M.P.s—one might say, indeed, of mutilated Members with mutilated members. Speaking in the debate on the Address, he declared, " I would rather this right hand of mine...

There is, I suppose, a common assumption that single women

have no dependents, and many of them are paid accordingly. The National Federation of Business and Professional Women's Clubs has been securing information on the subject from...

By ST RAT EG ICUS T is not easy to discover the full purpose of the surprise counter- ! offensive which was launched by Marshal Rundstedt last Satur- day morning. The security...

By GORDON MALET H AVING accepted the principle of a universal comprehensive health service, the Government has had to devise a policy to translate the aspiration into reality....

By NORMAN SCOTNEY T HE prospect opening up for the British theatre is encouraging. There are signs of a considerable shaking up in matters theatrical ; signs, also, of answers...

By J. L. HODSON S HEFFIELD folk, for all their kindliness, can be difficult to get to know. A man who is a leading citizen today, and who in his time has worked in the Far East...

No May night was ours Through the soft shades sighing, But storm, storm, storm, And a wild wind crying. No shadowed tryst was ours, No wood birds calling, But a broken world,...

By MAJOR CEDRIC GLOVER T HE new Archbishop of Canterbury will find that consecration has endued him not only with the spiritual and administrative functions associated with his...

In seeking to justify on purely legal grounds the common-sense

attitude adopted in such matters by the Government, Sir Donald Somervell employed arguments which were not unassailable, although from the moral and reasonable point of view his...

Mr. P. G. Wodehouse, which has received considerable publicity in the Press. There is a danger, as matters stand, that the public may either exaggerate or minimise Mr....

The second question is whether in these broadcasts he said

any- thing either in favour of our enemies or in dispraisal either of our- selves or our Allies. In his broadcast of July 9th, Mr. Wodehouse contrasted the conduct of the French...

The fourth question is whether the German authorities them- selves regard the Wodehouse series as being to their advantage. It is significant that Mr. E. D. Ward (the American...

1[ 4 AWYERS, especially elderly lawyers, are sensible people, and I am not among those who believe that the law is a fool. It is on the face of it unlikely that generations of...

Dreaming." At the Empire.--" Out of Chaos." No release arranged. I SPENT a very pleasant evening recently with the Film Appreciation Group of a Technical Institute in South...

" Hamlet." At the Bristol Grammar School.—" Peter Pan." At the Stoll Theatre. Tag annual dramatic performances by the boys at Baynes Park School were of such an unusually high...

From my domestic prison I may range As Fancy leads. I watch the curdling sea That rims a foreign shore, or pluck the strange Persimmon from its boughs of ebony. The moon that...

SIR,—Were I writing from the House of Lords instead of from the Western front, I should no doubt be able to view " Captain, B.L.A.'s " letter with the same calm contempt as Lord...

SIR,—On September 8th you were good enough to publish a

letter I sent you concerning the composition of the E.A.M. in Greece. May I ask your indulgencep publish this letter in reply to your article " Govern- ments and Disorders " in...

THE TROUBLE IN GREECE sm,—I wish to correct a considerable inaccuracy in the letter you were kind enough to publish from me last week. The E.L.A.S. Com- mander to whom I...

Ste,—I hope you will allow me a little space in

which to take up a few of the points made by my friend Mr. Utley. His statement of the doctrine of legitimacy and non-intervention is impeccable in so far as it relates to...

SIR,—May I encroach on your space to make one or

two observations on Lord Winster'S second letter? I cannot agree that I have misinter- preted his original one, or that I have linked him with " Captain, B.L.A.'s " analysis of...

of secondary schools, I feel that there are points in the proposed new salary scales for teachers, the effect of which, though very important, may not be appreciated by the...

SIR,—I think those of your readers who were disturbed by

" Capt. B. L. A.'s " letter should realise that Servicemen are bound to experience periods of mental depression, especially the men who have been away from home life for five...

for the immediate setting up of a Constituent Assembly in India with " the necessary assurances as to the destiny of its decisions " is both timely and wise. Equally wisely, he...

SIR,—The sudden death, after much sufferin g , of Francis Yeats Brown is a very real sorrow to those who worked with him on The Spectator staff from January, 1926, to March,...

WHAT may be called an arbitration award, ar g ued out in the most scientific manner, has been published (in the Estates Magazine) in the battle that has been proceedin g , most...

An Avicultural Jubilee A g ood many field naturalists feel a

certain hostility towards avicul- turists ; and it is, of course, true that the ca g in g of birds may be brutal, since birds are of the air, aerial. In Spain I have seen French...

particularly interested me because it was lar g ely concerned with a species that may become a re g ular English visitor. It is, I am told, increasin g very rapidly in its more...

" So far there is no evidence whatever that the patients as a whole, meaning the voters of the country, are in the least opposed to the National Health Insurance scheme." The...

In My Garden In plantin g new fruit trees—pears, plums and

cherries, not Iess than apples, it is necessary to follow such advice as is admirably boiled down in a little leaflet republished by the John banes Horticultural Institution...

SIR,—It is the accepted practice in medicine that a new treatment is never adopted on laboratory evidence alone ; it is first put to ri g orously controlled clinical tests on a...

Planning Diplomacy Diplomacy in Fetters. By Sir Victor Welles:ey. (Hutchinson. 16s.) SIR VICTOR WELLESLEY, who has had a life-long experience of diplomatic practice, has had...

A Chinaman in Oxford

Is. 6d. THIS is a remarkably interesting book by a Polish flying officer, who early in the war escaped from Poland through Rumania to France, and then after the collapse of...

No More Than Human. By Maura Laverty. (Longmans. Es. 6d.)

HITHERTO when Miss Kay Boyle has written about human love— the major and testing theme for every novelist—her approach to it has been through symbols, by the way of the poet,...

Windfalls. By R. C. Trevelyan. (Allen and Unwin. 8s. 6d.) ONLY 350 copies of this book have been published, and these have presumably been snapped up,some weeks since. Let...

THE SPECTATOR" CROSSWORD No. 302

[A Book Token for one guinea will be awarded to the sender of the first correct !.ilution of this week's crossword to be opened after noon on Tuesday week, ?armory 2nd....

By CUSTOS SIR MONTAGUE EDDY'S eagerly awaited account of his achievements on behalf of the Argentine railway companies provides grounds for cautious hope but not for any...

The Golden Carpet. By Somerset de Chair. (Faber and Faber.

15s.) THIS volume contains Captain de Chair's narrative of the British expedition to Baghdad in 1941, and the subsequent campaign in Syria, which appeared originally in two...

Press 3s.) THIS is volume three of a trilogy of books about Shelley, his two wives Harriet and Mary, and his friend, T. J. Hogg. It is edited by Mr. W. S. Scott, who married a...