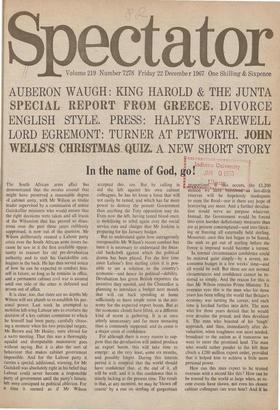 South African arms affair has demonstrated that the modus vivendi that might have preserved a reasonable degree of .cabinet unity, with Mr Wilson as titular leader supervised by...

How to take 'no' for an answer

So we have our vetoâand this time, at last, it is 'official.' The final outcome of Tuesday's meeting in Brussels was perhaps as satisfac- tory as we could have hoped for in...

Christmas shopping was in full swing, including a melodramatic exercise in shopping some of his recalcitrant Cabinet colleagues by Mr Harold Wilson. From this fierce...

King Harold and the junta

POLITICAL COMMENTARY AUBERON WAUGH During Friday's meeting of the full Cabinet on the South African arms embargo, a special pro- pos:al was made, and received general assent,...

CHRISTOPHER HOLLIS 'German youth is no longer interested in sex or drugs. It has dedicated itself to the cause of European unity and to German friendship with General de...

GREECE MICHAEL LLEWELLYN-SMITH AthensâLast Wednesday I came out of the library at one o'clock and went home for lunch. A friend rang up to say that tanks had been trundling...

AMERICA FERDINAND MOUNT New YorkâThe small bespectacled map in the Los Angeles waiting-room was explaining how most of America's problems could be solved by more accurate...

CENTENARY ' STRIX By comparing it to a plum pudding I mean no disrespect to Whitaker's Almanack: on the contrary. One does notâone cannotâcompare plum puddings with other...

THE LAW R. A. CLINE The embarrassing frequency with which divorce court judges in quite recent years have continued to quote Lord Penzance's dictum (1867) that marriage is...

THE PRESS DONALD McLACHLAN 'Our newspapers have nothing to fear from television if they will only stick to their own values and not be misled by visual ones.' To describe this...

J. W. M. THOMPSON Politically these past few days have been startling, and in a way difficult to account for in normal terms. Extraordinary explanations are required. In...

A winter's afternoon at Petworth

PERSONAL COLUMN LORD EGREMONT It is a dull winter's afternoon with dark clouds scudding before a whistling south-west wind. The wind at Petworth can make a strange noise as it...

CONSUMING INTEREST LESLIE ADRIAN Invention, Samuel Butler shrewdly observed, is the mother of necessity. Had we never heard of colour television we should have remained content...

Hello! (screams men's fashion editor of Now, the magazine for the thinking bachelor). After the phenomenal success of PANTIE MAGA- ZINE'S thrilling quiz last year to help you...

ANTHONY BURGESS The lady novelist is a comparatively recent phenomenon in the West and still, despite the high examples of the Misses Austen, Cross, Brophy and Cartland, not...

HENRY TUBE Not Yet the Dodo and Other Verses No Coward (Heinemann 25s) Noel Coward, that bright' young pen of the 'twenties, was an early exponent of a modern European trend...

GEORGE HUTCHINSON Myself, I am a great reader of wills. I hardly ever miss one in the newspapers, and I re- member feeling quite cross some years ago when a Conservative MP...

CLEMENT FREUD Celebrity Cooking edited by Renee Hellman (Paul Hamlyn 18s) People, I had always believed, purchased a cookery book because they had a high regard for the...

Goodbye to all tat

ARTS ROY STRONG Has it occurred to you that Christmas is a leaden weight dragging you slowly down- wards into an abyss of mythological pap as the years go by? We are slowly...

The most fantastic year MONEY

NICHOLAS DAVENPORT This has been the most fantastic year in the whole history of the Stock Exchange. It began with the professional investment world con-, vinced that equity...

PORTFOLIO JOHN BULL My final purchase of the year is Ernest Scragg of Macclesfield, manufacturer of advanced machinery for the textile industries of the world, working flat...

CHRISTOPHER FILDES This being the season of universal generosity and goodwill . . . yes, sir, what is your question? Well, you must realise that there are conven- tions to be...

Credit gets the blame

CUSTOS The markets, both equity and fixed-interest, are moved these days more by political considera- tions than by business projections. So the good rally that took the...

:Sir: Is it possible that critics of the Keith lectures

(vide Angus Maude. SPECTATOR. 15 December) underestimate the subtlety of Dr Leach? Is he not ,perhaps a satirist as savage as, but more sophis- ;ticated than, Swift himself,...

to the instant 'New Jerusalem.' Perhaps we might explore further the implications of Dr Leach's revelations on education. Emphasis on individual achievement leads to `fear' and...

Sir: Some aspects of the practice of medicine in Russia today were so unexpected to this observer, that on returning from a recent short visit to Moscow and Kiev I wrote a brief...

Sir: The spectacle of the well-known Roman Catholic apologist, Mr St John-Stevas, championing individual rights in the House of Commons must have come as a somewhat startling...

Sir: A quotation from Marc Ullmann's excellent article 'France becomes an island' (15 December): 'One British official said . . . that Britain fought in 1940 not because of the...

Sir: One is naturally delighted when the SPECTATOR prints one's letter, and pleased to see a reply the following week. Pleasure turns to dismay when one realises that the...

Sir: The article in your issue of 8 December criticises not only the publishers of the advertise- ment in The Times hut also the young men who tear up their draft cards. You say...

Compliments of the season

AFTERTHOUGHT R. P. C. HANSON R. P. C. Hanson is professor of theology at the University of Nottingham. In many cities nowadays when the civic Christmas tree is put up in the...

Sir: Though I hope to be able to read the article in the British Medical Journal referred to by Dr J. Rowan Wilson in `Ant ills' (1 December), I hope that, for the benefit of...

COMPETITION Competitors are invited to compose a six-line poem, or stanza of a poem, on any one of the subjects given below, using three of the follow- ing four pairs of words...

Competitors were asked to compose a sextet on one of the following subjects : Barbara Castle, drugs, Last Exit to Brooklyn, the love song of a lonely computer. Computers, it...