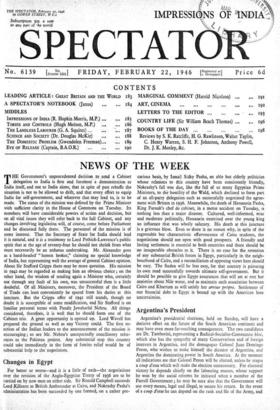 Argentina's presidential elections, held on Sunday, will have a decisive effect on the future of the South American continent and may have even more far-reaching consequences....

T HE Government's unprecedented decision to send a Cabinet delegation to India is first and foremost a demonstration to India itself, and not to India alone, that in spite of...

For better or worse—and it is a little of each—the negotiations over the revision of the Anglo-Egyptian Treaty of 1936 are to be carried on by new men on either side. Sir Ronald...

The Social Christian, or Catholic, Party made large and surprising gains in the Belgian elections held last Sunday. They increased their representation in the Chamber from the...

The suspicions and alarms created by the Canadian Government's revelation of the activities of foreign agents continue to grow and may have serious repercussions. Their most...

Mr. Shinwell's fight for the Coal Nationalisation Bill goes on in Standing Committee. Fight is the word. The recent remark that the Minister of Fuel cannot refrain from behaving...

The cheer which the Chancellor of the Exchequer received when he announced in the Commons the rise of exports in January to £57,000,000 must have caused certain misgivings in...

GREAT BRITAIN AND THE WORLD

I T was full time for another debate on foreign affairs in the House of Commons, though the preoccupations of the Foreign Secretary and the Minister of State at the U.N.O....

John Humphreys was one of the most effective propagandists of

his day. He was advocate for a cause—proportional repre- sentation—which had other able supporters, some weighty and distinguished in public life, but essentially he was the...

The facts concerning King Zog's wardrobe—if they matter a stiver

to anyone—are being straightened out. The Times, it will be remembered, stated unequivocally one day last week that this former sovereign, who had just left England, had ordered...

No one can feel quite happy at the news that

Sir Arthur Harris, " Bomber Harris," has left this country, apparently for ever, to settle in South Africa, without any public recognition of the immense work he organised so...

T HE new batch of diplomatic appointments, added to others I announced in the past month, marks a pretty extensive series of changes. The chief feature of them is the toughness...

The Opposition was disappointed in a hopeful little manoeuvre on

Wednesday night. Word had gone round that in spite of the important foreign affairs debate the Foreign Secretary was diverting himself at the ballet. The debate was to close at...

The question I raised last week about the position of

clergy and Free Church ministers under the new Insurance Bill has been answered in the House of Commons. Clergy and ministers, it seems, are not " under a contract of service,"...

The selection by the Secretary-General of the first members of

his new staff is in a sense a test case. It must be said at once that Mr. Lie comes out of the test well. The choice of a Russian member is of particular importance, and in M....

By HUGH MOLSON, M.P. I T is apparent from Mr. Eden's recent speech on the Goal Mines Bill that it is no part of the Conservative Party's policy to oppose nationalisation as...

By G. A. SQUIRES AM told that in Eire all farmer-landlords whose workers' houses I are tied to the farm and the job are legally bound to provide one acre of adequately fenced...

By DR. DOUGLAS McKIE T HE citizen of our modern state, while looking to his government for the ordering and regulation of local and national affairs and international relations,...

By GWENDOLEN FREEMAN T HE Government this month has announced its intention to establish a " National Institute of Houseworkers " whose most important aim will be to raise the...

By CAPTAIN, B.A.O.R. I AM drawing very close to the date of my release from the Army after six years' service, which has taken me to thirteen countries in M.E.F., C.M.F.,...

By HAROLD NICOLSON I WROTE last week about the mysticism of the Russians, attri- buting buting their ill-manners, not to any unkindness of heart, but to the moral arrogance...

Hear the challenge ring From March to Spring - " You dare not wake my closely-guarded bride Who by my side Sleeps in her frosted veil, Whose cheek is pale And cold as this...

Paintings by Eight British Artists. At the Lefivre Galleries.— Paintings by Jack B. Yeats. At Wildenstein's. THE exhibition at the Lefevre Galleries contains at least two...

14 Love Eternal." At the Curzon.—" The Diary of a Chamber- maid." At the London Pavilion.—" Excerpts from French Fil l s." Shown by the Royal Photographic Society. ALMOST a...

Sts,—Other readers of Professor Rappard's article in your issue of February 8th must surely have felt, as I did, a tinge of shame in the pride evoked by the kind things he wrote...

siR,—It is understood that, barring a sudden change in plans, India will have a clear indication of the British Government's intentions with regard to the Indian constitutional...

" OURSELVES AND RUSSIA " Sta,—Mr. Philips Price's article reads like a piece of blatant Soviet Communist propaganda. There is hardly a single statement which he makes that...

Snt,—In less anxious times the disclosure by the Secretary of State for the Colonies in the House on February 54th that the Sultan of Kedah considered his signature to the new...

SrR,—Until recently in Italy, may I be allowed to point out a few facts relating to South Tyrol which seem to have been overlooked in Sir George Frankenstein's article? (a) The...

SIR,—In his article on " Nationalised Industry," in your issue of February 8th, Geoffrey Cooper, M.P., says: " The Post Office leaves much to be desired in the standard of its...

starts with the following statement: " Will public ownership succeed where private enterprise has failed in the coal, iron and steel, road and rail and air transport, gas and...

SIR, —May I add a brief statement on the religious situation in Spain to the clear outline given by Don Salvador de Madariaga on Spanish affairs? General Franco recently, in an...

Sra,—I have but recently found time to study the National Insurance Bill, and I am appalled at what I find in it. So far I have counted 51 out of the 79 clauses which...

Sm,—May I, an old friend and admirer of Britain and the Empire, intrude a warning word in your pages upon the subject of Sarawak? For me and for many it is a test case. All...

RUSSIA AND THE LABOUR PARTY

Sta,Until fairly recently, any mention of Russia at a Socialist gathering was greeted with a storm of cheers. To the conventional Labour mind, that other great nation, the...

do not know by what authority " Janus " asserts that " Congre- gational and Baptist ministers are the servants of their individual con- gregations," but I can assure him that he...

Sm,—In the course of a statement in the House of Commons on January 24th, Mr. Ness Edwards gave this assurance: " So far as my Right Hon. Friend the Minister of Labour is...

The popularity of that rather queer vegetable, the potato-onion, seems to be on the increase. Its virtues are preached, for example, in "Home and County," the wise little...

Among light, some might say light-headed, articles in the same journal is a well-documented theory that roses and some other flowers are capable of jealousy! A yellow rose...

Winterers The general openness of the winter, which has saved

the Continent from disaster, has been a godsend to the birds. The most vulnerable and sensitive perhaps are the smallest, the long-tailed tits, or bottle-tits, so called most...

GREAT country houses which have proved too expensive for the successors of the so-called feudal lords are going begging in many parts. A new use has been found for one of them,...

Sta,—A friend in California has sent me a clipping from the Los Angeles Times. It is a letter from Hampton-on-Thames referring to alleged thefts in the British Post O ffi ce of...

one effect which may lessen fertility for several years. In hollows where the water stood every single worm has been drowned ; and these " earth- eels," so greatly detested on...

SIR,—On page 169 of your current issue you state that the term United Nations, representing a single organisation, is properly referred to in the singular and not in the plural....

Home to India. Santha Rama Rau. (Gollancz. 6s.) MISS SANTHA Rama Rau, daughter of a distinguished Indian official, was sent to school in England at the age of six, and returned...

A Tale of a Fish

The Development of the Soviet Economic System. By Alexander Baykov. (Cambridge University Press. 30s.) THE sheer mass of the literature on the SoViet economic system is perhaps...

Foothold in Europe. By Strategicus. (Faber and Faber. 10s. 6d.) THIS is the seventh volume of Strategicus's valuable review of the war, and another volume ought to complete his...

THE attractive Essex living of Thaxted fell to Conrad Noel in 191o. by favour of the quasi-Socialist Countess of Warwick, and as " the Red Vicar " of the headlines he held it...

What is Christian Witness ?

Wail this translation of Kierkegaard's last work, Dr. Lowrie reaches —perhaps—the end of the labours he has expended in bringing to the attention of English and American readers...

"THE SPECTATOR" CROSSWORD No. 363 IA Book Token for one

guinea will be awarded to the sender of the first correct o h i r i on of this week's crossword to be opened after noon on Tuesday week, March 5th. Envelopes must be received...

SOLUTION TO CROSSWORD No. 361

any signs of weakness, markets are decidedly less buoyant than at the beginning of the year. Just what has caused the change it is hard to say, but probably the main factors are...