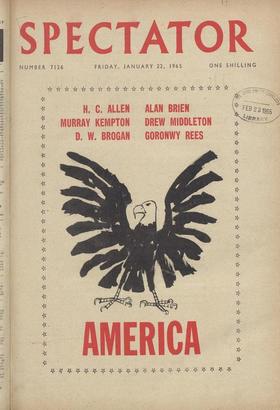 SIX WEEKS. AFTER HIS NINETIETH BIRTHDAY, Sir Winston Churchill's life drifted gently towards its close. Because of his illness, the celebrations of the 700th anniversary of...

C INCE the first news was given of his grave Oiliness, the attention of the world has been concentrated on a quiet house in Hyde Park Gate. Old men and children, friends and...

nts week's trade figures sent a sigh of relief I round Whitehall. If they had been bad again all the hoary old excuses about not attaching too much importance to one month's...

Looking Across the Atlantic E l VERY new President of the United States has to ask himself how he means to use the fearful gift of power which has been placed in his hands....

Israelis do not panic easily. But panic now seems the only appropriate response to the disastrous chain of events during the past few months, beginning in Cairo last October...

The Sound of Music

CHARLES REID writes: After half a year's suspension owing to the closure for structural improvement, the Royal Festival Hall's monthly throwaway—quite the deftest editorial job...

Talk and Table Talk By ALAN WATKINS A s far as I can discover, the phrase 'public ,,,,relations' was first used in this country by Mr. C. R. Attlee. The time was 1931, and the...

Briefed Chronicles By CHRISTOPHER BOOKER W HAT with the managing editor of the Sunday Times declaring on television last weekend 'I would like to smash the lobby system,' and...

I know little about how to play chess, but I read chess books. I find the technique, perhaps character is a better word, of the new world champion Tigran Petrosian a source of...

No Bonn In the event, Mr. Wilson cannot be unhappy

that he has had to postpone his visit to Bonn. It might give him time to think. Anything he might have had to say has been clearly pre-empted by General de Gaulle and the German...

Liss - r Friday, Christopher Booker started his first ar- ticle on 'The Press' with a piece on what he called 'the fastest-fading myth in Fleet Street'—the Daily Express. On...

I have no idea if William Hill (the bookmakers) employ a public relations officer, but if they do he does an excellent job. It has almost be- come a weekly routine now for there...

The handout is a (necessary) curse of modern political life. It shackles the speaker and bores his audience, but it delights tf.1 reporter who doesn't have to sit through a...

Tailpiece Next week Mr. Leo Baron will reply to the

High Commissioner for Rhodesia's letter in this issue. My money is on Mr. Baron. In the mean- time I offer one thought. Mr. Campbell wonders why Mr. Baron made no reference to...

Ghosts of the Row By NEVILE WALLIS S OME anonymous edifice has arisen on the SOME site which an historic publishing house occupied for generations in Paternoster Row on the...

At His Own Risk 1 sympathise fully with Sir David

Webster's difficulties over the allocation of tickets for Covent Garden. The excessive demand is partly a result of very high standards and partly of the virtual monopoly which...

LOOKING ACROSS THE ATLANTIC

The . Origins of a Relationship By H. C. ALLEN T HE week in which Lyndon B. Johnson has been inaugurated as President of the United States in his own right, having been...

How it Seems from There

By D: W. BROGAN T o return to England after five months in the United States is to change the mind as well as the sky, for one leaves a country that is in a high degree of...

From MURRAY KEMPTON NEW YORK A MERICA 1965? How odd Mr. Dickens would A. find it that most of the contributors to the Spectator's American issue are brothers from his own...

The Rules Ran Out

From DREW MIDDLETON T may be pure cussedness on the part of the I French. Or it may be that Americans are be having better abroad. But when General de Gaulle and his government...

The World of Susan Sontag

By ALAN BRIEN I N the literary supplement of the Sunday Herald Tribune for July 5, 1964. there ap- peared a two-page lead review entitled The Centrality of the Net.' The book...

IN NEXT WEEK'S 'SPECTATOR' •

By RICHARD GILBERT his film has been seized in two continents and four different countries in Europe. In Belgium the police seized the manager of the cinema. In Holland the...

year (including postage). For this rate, the paper will be delivered by surface mail to any address in the world. Air mail rates for overseas subscribers are : f4 12s. to...

SIR,—Owing to the vagaries of the Christmas postal services, and the fact that, though living in the legis- lative capital of South Africa, I am 6,000 miles from the majority of...

SIR,—1 am sure that Mr: Christopher Booker meant no harm last week when he dragged me into what appeared to be an attack on the Editor of the Daily Express. But he really has...

The 'Machin' and All That

SIR, —You have never been tempted to shelter be- hind that 'Sir,' but you have said more than once that you cannot be held responsible for the views of all your contributors....

SM.. -Your contributor, Terence Bendixson, is somewhat unfair in his article 'Objections to Oxford.' In condemning the city planning depart- ment for failing to indicate in the...

SIR,—As the Secretary of the National Greyhound Racing Society did me the honour of reading my article on dog racing (January 8) he might have read it a second time. I stated...

Correspondents are reminded that the briefer the letter, the better

its chance of publication. The Editor reserves the right to shorten letters for reasons of space.

Politics and the Community

SIR,—In a recent letter ('Politics and the Com- munity') Dom Robert Petitpierre asked fundamental questions about the nature of the community and suggested it should be possible...

a Reviewing .—The reviewer of Professor Grafta's Bohemia rsus Bourgeois

and Mr. Easton's Artist and Writers Paris, in your issue of November 27, claims to cal a modern malady of the book trade, but iself is a plain case of a more virulent diseaseln...

Great Society My Fair Lady. (Warner; 'U' certificate.) rrixis week my friends and relations are I mildly green. Most of the time, even if secretly they think filmgoing an idle...

Exit Left, Enter Right From ED B ROADWAY comedy this season has been blighted by Race and Goldwater. These were the big issues, the stuff of topical humour—or so the comedy...

Not So Primitives I N the opening season's press of familiar names, 'the London debuts of two unknown painters of personal vision and directness should not be missed. Douglas...

By GORONWY REES I N the history of our times the name of Whittaker Chambers will always be associated with Alger Hiss, as if the two were bound by some infernal compact that...

WITH the publication of these two volumes all of Henry James's short fiction is now available to us, complete—and all of us interested in James owe both editor and publishers a...

AMERICANS, as Professor Marx observes, have often explaiped their national experience as a collision of opposites: north and south, creditor and debtor, frontier and seaboard,...

SYDNEY SMITH did not read books before he re- viewed them. He said it prejudiced a man so. Some political biographers might think of not writing books before their man is ready...

James Baldwin reading from Giovanni's Room and Another Country. James Jones from From Here to Eternity. William Styron from Lie Down in Darkness. Bernard Malamud from The...

Power at the Pentagon. By Jack Raymond. (Heinemann, 50s.) BIG government, huge defence and Negro rights are preoccupations of the modern American. and these four books provide...

'EpocH IV is a computer that writes books and The Tin Men is its first novel. . . .' That is the final twist with which Mr. Frayn, in a chapter running to only two sentences,...

MAcAarriva's career is one of the most remark- able in the history of the Republic. As a child his first memories were of Geronim braves riding towards his father's fort, yet he...

By DAVID QUINN J ACOBEAN and Stuart England spawned a curious variety of colonies across the western ocean—Virginia, intended industrial frontier of the London merchant class,...

Interest Rates The Two-Tier System By NICHOLAS DAVENPORT T HE resounding success of the big LCC loans filled me with gloom. Is this the dawn of the social revolution or its...

Another Part of the Forest By STR1X H UMAN beings are not the only creatures in wItose affairs luck plays an important part. Take the case of Benyon's Progress, a four-year-...

Many a Slip By LESLIE ADRIAN n1TY the poor parents who have to buy school r uniforms. These embellishments are one of the hidden costs of secondary education. Not en- tirely...

By GILES PLAYFAIR I F, as some sour-minded critics have recently been suggesting, the BBC makes too profligate a use of amateur talent, that cannot be from miserly motives. The...

SOLUTION TO CROSSWORD No. 1153 ACROSS.-1 Mediterranean. 9 Cheap- side.