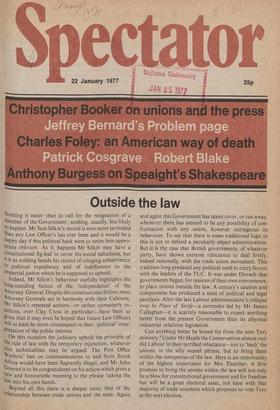 Nothing is easier than to call for the resignation of' a Member of the Government ; nothing, usually, less likely to happen. Mr Sam Silkin's record is now more tarnished than...

Two artistic men of violence came to violent ends. In Derbyshire an escaped prisoner, William Hughes, was shot dead by police marksmen, after a long chase during which he had...

Locusts and honey Frank Johnson My theme is 'the political wilderness': r esignation, back benches, warnings to a sleeping nation, storm clouds gathering over Europe/the...

Judgment is now due from the Court of Appeal in the most important case which has arisen in the struggle between Private Eye and Sir James Goldsmith. This is the distributors'...

An orphan's curse Auberon Waugh There was something unutterably sad about a recent article in the Sunday Times W here, under the heading 'The MiddleClass Defectors' Mr Hugo...

An American way of death

Charles Foley Los Angeles It was not a very edifying mode of revival for the death penalty. Gary Mark Gilmore, 36, who wanted to die 'with dignity and grace,' lived twitching...

Echeverria in the wings

Alex Finer I f Jimmy Carter suffers any post-inaugural blues on finally reaching the White House this week, he can cheer himself up by putting in a call to another newcomer to...

Death of a free press

Patrick Cockburn During the Lebanese civil war reporters faced a problem in describing the antagonists. Were we to call them 'Christians' and 'Muslims' or 'the right' and 'the...

The god that failed

John Grigg Anthony Eden was an almost godlike figure to the general British public from the early 1920s, when he first entered Parliament, until the mid-1950s, when his career...

Patrick Cosgrave Late in 1969 1 received an invitation from the Institute of Economic Affairs to a function called a Hobart lunch, to be held at 2 Lord North Street. I had not...

Christopher Booker This was not perhaps the most delicate of moments for David Astor to choose to rehearse in Index his familiar view that restrictive practices by both the...

Bullocking industrial revival Nicholas Davenport The Prime Minister was quick to contradict the silly press report that he was assuming an overlordship of the economic and...

Jeffrey Bernard There's nothing worse than an unshared heartache. No matter how difficult or how trivial our problems seem, all of them are made easier when they are shared. If...

Sir: Mr D. H. McNeill's letter (8 January) in defence of the SNP shows an ignorance of Scottish constitutional history typical of modern nationalists. He seeks to pretend that...

Asians in Africa Had an Englishman written as Mr 1 .,, N aiPaul

has written about Kenya and enyan Africans it is not difficult to imagine t i _oe abuse, scorn and contempt that would ; l ave come his way. As a popular writer of Indian origin...

Sir: I have no personal objection to Mr H. Justin Evans (15 January). Nor have I any doubt that Mr Alan Watkins can defend himself. He has done so in the past. He can do so...

Sir : Hans Keller's assertion that the British cultural elite is hostile to homosexuality and tends to denigrate the work of homosexual artists stands truth on its head. The...

comment that two topics typical of the bore's conversation are that 'the price of bread has fallen,' and that 'there seem to be too many foreigners in town': Geoffrey Wheatcroft...

Up the monument Anthony Burgess Shakespeare: The Man and His Achievement Robert Speaight (Dent £6.50) A certain British actor, clarifying for the laity the process of becoming...

Robert Skidelsky The Poverty of Power: Energy and the Economic Crisis Barry Commoner ( Jonathan Cape £5.50) The idea of a closed or closing circle has always fascinated the...

Charles Davis On Being a Christian Hans Ming. Translated by Edward Quinn (Collins E7.95) What does being a Christian really mean ? I am not sure this question, which Hans...

Benny Green Two Monsoons Theon Wilkinson (Duckworth £5.95) There is an old saying that the least uglY daughter is always the family beauty; it is a truism which the reviewer...

The claims of the Court Ted Whitehead Sizwe Bansi is Dead (Royal Court) The Point (Mermaid) In 1970 1 submitted my first play, which had collected the usual pile of rejection...

Standards Robert Cushman England is better at appreciating popular singers and popular songwriters than at breeding them. It is not perhaps to be wondered at ; the great...

Low grade Richard Ingrams According to a report in the Daily Telegraph last week scientists working for the Ministry of Defence are appealing for guinea pigs to take part in a...