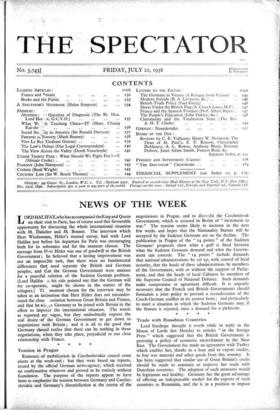 Tension in Prague Rumours :of mobilisation in _ Czechoslovakia caused

some alarm at the week-end ; but they were based. on reports, issued by the official German news-agency, which received no confirmation whatever and proved to be entirely...

and Queen on their visit to Paris, has of course used this favourable opportunity for discussing the whole international situation with M. Daladier and M. Bonnet. The interview...

Trade with Danubian Countries Lord Stanhope thought it worth while

to reply in the House of Lords last Monday to articles " in the foreign Press " which suggested that the British Government is pursuing a policy of economic encirclement in the...

Houses for Rural Workers The third stage in the Government's

long housing programme will soon, it is hoped, get under way. The first was that associated with slum clearance ; the second, overcrowding; and there now remains the urgent task...

The Advance on Sagunto In a broadcast speech to the

nation from Barcelona on Monday, the President of the Spanish Republic, Senor Azaiia, gave a definition of the Spanish conflict admirable in its clarity and simplicity. It is,...

Strikes " Out of Date " " Today the strike

weapon is out of date," said Mr. Joseph Jones in his Presidential address to the Mineworkers' Federation, only qualifying his statement with the words " unless faced with...

To many persons it must have been rather disturbing to

learn that so great a manufacturing country as Britain should have to place large orders abroad for aeroplanes and aeroplane engines. But this .is part of the price we have to...

War and Trade in Japan Japan , has made little

progress this week in her advance on Hankow. The city itself; and the Canton-Hankow railway have been severely bombed, and the Yangtze forts below Kiukiang heavily bombarded ;...

Economic Future of the Empire In his speech to the

Manchester Chamber of Commerce Mr. Malcolm MacDonald expressed a statesmanlike view of the future of the Dominions. We must not think of them, he suggested, as expanding simply...

On the Government Benches Mr. Churchill was listened to with

manifest impatience. Not unnaturally he is regarded as a partisan in the dispute upon which the Select Committee is now adjudicating. Moreover, the subject is one upon which a...

The New Director-General This week the British public learned with

some relief that the Governors of the B.B.C. had brought their deliber- ations to an end and chosen a successor as Director-General to Sir John Reith ; and it is gratifying that...

In debating the report of the Unemployment Assistance Board members

had remarkably little to say about the actual administration of the Means Test. In view of the frequent and furious altercations that used to take place on this topic, there...

The Doctor and the Law Some of the legal and

medical aspects of the trial and acquittal of Dr. Bourne this week are examined by Lord Horder in an article in this issue ; it is fair to say that the case aroused public...

The Week in Parliament Our Parliamentary correspondent writes : The

renewed debate on privilege was an unprecedented occasion. Never before has the House of Commons been compelled to admit that it may have censured the wrong people. The Liberal...

Examination Reform Far-reaching changes in the School Certificate examination are

foreshadowed in a circular which was issued on Monday by the Board of Education. At present the syllabus for the examination is divided into four groups which include,...

W E can have no doubt that the welcome which the Government and people of France have given to the King and Queen on their state visit to Paris was as sincere and heart-felt as...

m HE holidays have arrived, or nearly arrived ; and J for some of the thousands now preparing to go to the country or seaside one of the questions to be answered, after...

T HE Conference of the British Medical Association at Plymouth opened with the announcement that a Committee of members had been chosen to advise the Home Secretary concerning...

ABORTION : A QUESTION OF DIAGNOSIS

By LORD BORDER THERE will be very few people who are surprised at the result of the Bourne case and fewer still, it may be hoped, who think that the present safeguards against...

WHAT WAR. IS TEACHING CHINA IV

Hy MADAME CHIANG KAI-SHEK [This is the fourth of a series of five articles on China today by the wife of the Chinese Commander-in-Chief. Mme. Chiang Kai-shek is a graduate of...

By SIR RONALD DAVISON P RESIDENT ROOSEVELT is a great man and a great Liberal. A recent visit to Washington and the Middle West has served to strengthen my personal opinion...

By MARK BENNEY T HE army of the homeless marches on its feet : and if that seems to you an unnecessary truism, go to a free night- shelter at the moment when a hundred...

By OUR LEGAL CORRESPONDENT T WO and a half years ago the Royal Commission on the Despatch of Business at Common LAw reported that " in the absence of a substantial increase in...

THE VIEW ACROSS THE VALLEY

By DEREK VERSCHOYLE The house was placed on a hill. In front of it a series of narrow terraces reached down to the end of the garden, bounded by a wall of dark Jacobean brick....

WHAT SHOULD WE FIGHT FOR ? y. Under Thirty Page

By ALISTAIR COOKE [The writer, who is well known as a broadcaster and dramatic critic, is aged 29] T HERE is an awkward pathos common to all European men and women of our age....

THOSE who resent the intrusion of political propaganda into the realm of cinema need have no hesitation about seeing The Thirteen, for, although it is a direct product of the...

PAGEANT " England's Pleasant Land." By E. M. Forster. At Milton Court THE Dorking and Leith Hill District Preservation Society, and indeed every one who had a finger in it,...

The Year's Recovery Evidence of the power of recovery in things has delighted the eyes in all directions this July. Harvest fields grow white and golden with level and healthy...

THE GERMANS IN VIENNA

[To the Editor of THE SPECTATOR] SIR, —Your correspondence on suicide,

while containing a criticism of the existing law that would be perfectly valid if the letter of the law were logically applied, does not seem to allow for what actually happens....

Sta,—In his letter appearing in your last week's issue, Mr.

Olivier Long laid rather undue stress upon the difficulties of expanding British trade with South-Eastern Europe. Admit- tedly the problem is by no means easy to solve. When it...

[To the Editor of THE SPECTATOR] your interesting and informative article on this subject you refer to a letter I wrote to The Times in which I urged that the law should be...

• SLAVES UNDER THE BRITISH FLAG

[To the Editor of THE SPECTATOR] Snt, — I would like to add a postscript to the article by Sir John Harris on Slavery in Bechuanaland and to thank you and him for -again...

[To the Editor of THE SPECTATOR] SIR,—Sir Maurice Amos in his letter raises a very large and most complex issue. I am sure he will agree that one can hardly do justice to it in...

[To the Editor of THE SPECTATOR] SIR, — In reply to Mr. Moon, may I say that I did not and do not accuse the Prime Minister of intentional " self-seeking at the expense of his...

[To the Editor of THE SPECTATOR] SIR, — It was not without some surprise that the French read certain statements, which, according to the British Press, Mr. Chamberlain made in...

THE EAST ADMONISHES THE WEST

[To the Editor of THE SPECTATOR] Snt,—I am interested to observe that Mr. C. E. M. Joad's encyclopaedic knowledge now extends to China and the Far East, and that he is ready,...

Sta,—Mr. Charles*Madge surely errs when, in his interesting analysis of

current news values, he concludes that' if a news- paper does not give its readers the right type of news-story, its circulation falls. I believe I am right in suggesting that...

[To the Editor of THE SPECTATOR] Sta,—Let us accept, for the sake of argument, Mrs. Ellison's contention that a foreign employer settling in England will employ the greatest...

[To the Editor of THE SPECTATOR] SIR, —While agreeing entirely with your article on " The People's Education " in your issue of July 15th, I want to add some things of...

CHRISTIANITY AND THE TOTALITARIAN STATE

[To the Editor of THE SPECTATOR] SIR,—The Bishop of Durham in your issue for July isth contributes a discussion on " the Christian Church and the German State." According to...

Snt,—Having read your article, " The People's Education," with great interest, though I cannot say I found it very helpful, I wonder if I might be permitted to make one or two...

DR. JOHNSON AND A. E. HOUSMAN [To the Editor of

THE - SPECTATOR] Sul,—The very obvious similarity between some verses in A Shropshire Lad and those by Dr. Johnson which are referrecl.to by Professor W. L. Phelps, must have...

BOOKS OF THE DAY By C. E. YuLLIANIY IN these jarring days, full of uncouth noise and of ugly preparations for a state of general insanity, many of us discover a melancholy joy...

THIS latest volume of " The Shakespeare Head Bronte," a model for dignity of page and printing, contains the final instalment of " the miscellaneous and unpublished writings of...

Dpetrines of the Creed. By Oliver C. Quick. (Nisbet. los. 6d.) SYSTEMATIC theology has perhaps in the ears of the layman a forbidding sound, but Canon Quick's book can be...

THE QUALITY OF JUSTICE

Justice in England. By a Barrister. (Gollancz. 7s. 6d.) SOME while ago, an anonymous " Solicitor " published two books in which he drew a highly disquieting picture of the...

ABSALOM SCOTT ALL the trappings of romance hang about James,

surnamed Scott, the charming, impetuous youth, his father's spoilt darling, the white hope of the Protestants, the heroic tragedian of Sedgemoor, the lover who refused to repent...

There are plenty of books that teach one to identify

wild flowers. There was room for one dealing with botanising as a pleasure rather than a science, and Mr. Robert Gathorne- Hardy was the man to write it. He has produced a very...

Mr. White's painstaking attempt to set in order Coleridge's political views, with due account of the development from his revolutionary youth to the liberal conservatism of his...

Professor Keith's books on the constitutional structure of the British Empire are, as everybody knows, indispensable works of reference. But which books ? Poor students and...

Fraulein Boveri pilots us round the Mediterranean with the skill

that might be expected of one who combines long experience on the staff of the Berliner Tageblatt with intimate knowledge of southern Europe and northern. Africa. Her history is...

By CUSTOS WHATEVER one way think of the origins of the Wall Street rise, the movement is certainly showing some staying power. Anyone with the least gift for figures can...

THE SUGAR AGREEMENT THE sugar-exporting- countries of the world have succeeded, not without difficulty, in making the cuts in exports estimated to be . necessary in- , the year...

THE SPECTATOR " CROSSWORD No. 304 By Zinqo [A prize

of a Book Token for one guinea will be given to the sender of the first correct solution of this week's crossword puzzle to be opened, Envelopes should be marked " Crossword...

SOLUTION TO CROSSWORD No. 303 SOLUTION NEXT WEEK

The winner of Crossword No. 303 is Mrs. Frederick Robinson, 16 Bradmore Road, Oxford.