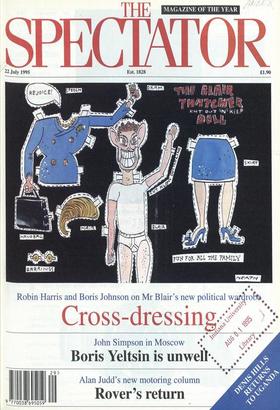 T he Greenbury committee on board- room pay recommended that: listed com- panies should follow a new code of best practice and announce each year if they had done so; they...

When will the Labour Left rise up against Mr Tony Blair? After the next election, that's when BORIS JOHNSON T he Omerta in the Labour Party is becoming quite oppressive. No...

ANDREW MARR W e now enter the interminable politi- cal summer, running from mid-July to the end of October, when British democracy is suspended and the Commons becomes a...

The fate of the Bosnians is, if anything, of rather less interest than poor Peter Zizzi AUBERON WAUGH A week spent in the idleness and luxury of a Suffolk health farm disposes...

The Labour leader proclaims himself heir to the radical tradition of Thatcherism. Robin Harris, an adviser to Margaret Thatchet; explains why the Lady herself finds this...

persist. . . 'IF I CAN'T have her, nobody else is going to.' More sinister words do not exist in the English language, for they serve as a pre- lude if not always to murder,...

Twenty years after he was sentenced to death by Idi Amin, Denis Hills returns to Uganda, and experiences mixed emotions Kampala 'WELCOME home to Uganda,' said the passport...

John Simpson discovers that reports of the Russian leader's imminent death are greatly exaggerated Moscow SO BORIS is still with us. They had to get a camera into his hospital...

'GENERAL FRANCO has for several months past steered Spain more and more definitely towards a restoration of the monarchy. His speech at the Falange Council last Tuesday was the...

IN CHAPTER law of Raymond Chandler's The Lady in the Lake Philip Marlowe finds himself in Bryson Tower on Sunset Place, where there is 'a night clerk with one of those...

AN AUDIENCE WITH PRINCE GIORGIO I

Vitali Vitaliev meets the head of the sovereign state of Seborga, and • becomes his 351st subject Seborga 'I AM now going to make an important declaration and tell you...

ARMS AND THE MANOR

Ross Clark attends an auction of feudal titles, and finds that the market in acquired respectability is not what it was IF YOU talk to an estate agent he will tell you that we...

Mr Humphry BERKELEY, of 3 Pages Yard, Church Street, London W4, who was Conservative MP for Lancaster 1959-66 and later stood several times for both Labour and the SDP, died on...

Larrikins, hobbledehoys and the North London Cocktail Circuit PAUL JOHNSON T he Bishop of Oxford was a happy man at the annual British Library party. 'Ho, ho!' he boomed at...

The crew come ashore with their gold, but the owners go down with the ship CHRISTOPHER FILDES I t has been a bad week for owners. Bar- ings' shareholders, who were wiped out,...

Sir: The 'great quantity of ignorance' about executive pay, against which you fulminate in your leading article of 15 July ('Green- bury rules') seems to be shared in full mea-...

Sir: I was saddened though not surprised by the tone of General Horsford's account of his wartime experiences fighting against the Japanese invaders in Burma ('We were walking...

Sir: Sir Paul Condon has not been very popular since he commented on some of the muggings taking place in London being attributed to a certain section of the popu- lation....

Sir: If I have to read another of your columnists

prattling on about Sir Thomas More, I may cancel my subscription. Jen- nifer Paterson is the latest example (Food, 24 June): 'We have had three good British saints this week. St...

Sir: I am happy to learn that locusts are becoming fashionable food at long last (Food, 24 June) and that Jennifer Paterson would rather like to taste them. She may care to try,...

Sir: In each of his three most recent columns (City and suburban), Christopher Fildes has suggested affinity between cur- rent Conservative Euroturmoil and protec- tionist...

Tristan Garel-Maastricht-Jones Now says he wants no Euro-clones. As acting, this is quite a meaty Slice of ham by Jones the Treaty. Irfon Roberts Priory Wall House, 3...

Sir: J.D.N. Stobart's response (Letters, 17 June) to his horror at Alasdair Palmer's article (Prejudices on parade', 10 June) that he would not renew his subscription to The...

Sir: Re the inadvertent transposition of two pages of Carole Morin's column (1 July): may I suggest that you try this more often? The column made no less sense than usual...

Death of a joke

Sir: My thanks to Peter Lewis (Letters, 8 July) for his explanation of the acronym Qantas. I had always thought it meant Quite A Nice Trip, All Survived. Ceadmon Featherston...

Sir: R.V. Jones (Letters, 24 June) says he cannot find any reference to Alexander the Great's homosexuality in Plutarch's life of him and asks for the evidence of it. In Chapter...

Sir: I have been very moved by the number of kind letters I have received from readers of The Spectator. I fear I cannot answer them all but, in reply to a number of specif- ic...

Whitehall has finally succeeded in destroying the measure of the English class system SIMON JENKINS other rope tethering Britain to its past has frayed and snapped. According...

Ah, Josephine, petite perle fine! Alastair Forbes NAPOLEON AND JOSEPHINE: AN IMPROBABLE MARRIAGE by Evangeline Bruce Weidenfeld & Nicolson, £25, pp. 555 I t must have been an...

Half the apparent truth of the world is mad (whether the optimists' good' or the pessimists' bad') and most of us failed the exams in it, after all, bored stiff by the so-called...

Tony Gould OF LOVE AND OTHER DEMONS by Gabriel Garcia Marquez Cape, f13.99, pp. 147 novel by Marquez is generally a rich confection, and this one is no exception. The...

Remembering the twins from a safe distance

Confessions of an amateur cracksman

Robert Cooper THE BLUE SUIT by Richard Rayner Picador, £9.99, pp. 215 I t's easy to steal. The hardest part is surely finding the nerve to carry it off. Richard Rayner had no...

Young man in a hurry

The Makropoulos Case (Glyndebourne) Ineffable pleasure Rupert Christiansen I am flattered to hear that the English National Opera has finally taken my advice and is now...

Finding true love Alan Judd I was asked recently why I've owned 54 cars (none new, I always add, as if in excul- pation). That does not intlude my child- hood pedal-car nor...

Bob, you're still a hero Nigella Lawson I didn't actually see the real Live Aid. I was writing a book review at the time. What the book was I can't remember, though I have a...

Dreaming of the Queen Jeffrey Bernard M y Superman costume hangs lifeless and moth-eaten in the wardrobe and I fear that I am condemned to spend the rest of my life as Clark...

A real behind Taki I t is not only the worst of times, it's also the summer of despair, the season of dark- ness, and the epoch of incredulity. A holo- caust is taking place,...

Play straight Andrew Robson THE KEY to successful defence is co- operation. As much information as possi- ble should be conveyed to a partner who may be faced with difficult...

Gambling away another fiver Nigel Nicolson I may have told this story before, but it bears repetition if only to provoke comment on my craven behaviour and sug- gestions how I...

A 1994 miracle for everybody Auberon Waugh N one of the classic wine regions is rep- resented in this offer for summer drinking, which covers some new wine areas in France, as...

GREY SKIES overhead, such a relief from that heatwave — they always reduce me to a non-functioning robot. It rained at last a week ago this Saturday, on St Swithin's Day, so the...

The game of politics Raymond Keene THERE HAVE BEEN a number of heroic chess exploits by parliamentarians, includ- ing a near draw by Jeremy Hanley in a simultaneous display...

A likely story Jaspistos IN COMPETITION NO. 1890 you were invited to provide an anecdote in which a clothes-horse, a piece of toasted cheese, a black-beetle and a harp each...

A first prize of £25 and a bottle of Graham's Late Bottled Vintage 1988 Port for the first correct solution opened on 7 August, with two runners-up prizes of £15 (or, for UK...

Saint Senna Simon Barnes NOSTALGIA IS an ineluctable part of sport, just as memory of youth is of age. Youth: when all sporting heroes were 12 feet tall, Giant the...

Dear Mary. . . Q. A regular tennis partner is driving me nuts with her constant moanings about this or that ache or pain — even during a match. I have already tried what I...