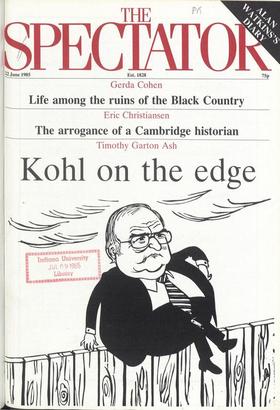 A TWA jet on a flight between Athens and Rome was hijacked by two Shi'ites who demanded the release of the 766 Shi'ite internees transferred into Israel from southern Lebanon...

DO NOT PAY DANEGELD T here must be a great temptation for President Reagan to concede to the Beirut hijackers' demands. He knows that Israel was anyway preparing to release its...

SOME time during the Attlee terror, Professor Michael Oakeshott irreverently described Ernest Bevin as the worst for- eign secretary since Sir Anthony Eden, his immediate...

THE recent signs from Poland have been almost all bad. Three outstanding Solidar- ity activists were last week convicted in Gdansk, in a trial which can only be described as...

Charles Moore is on holiday.

`This pig doesn't weigh as much as I thought it did' BRUCE ANDERSON F or at least a year now, the next general election has seemed closer than the last one. When that happens...

THE IMPORTANCE OF BEING GERMAN

Timothy Garton Ash in Hanover sees Chancellor Kohl step through a Silesian minefield with the delicacy of an elephant How comforting it is, once or twice a year, To get...

THE position on Friday afternoon was this. Lord Salisbury has accepted office, and after a short and sharp struggle with Lord Randolph Churchill, has secured his co-operation by...

Christopher Hitchens assesses the chances of America invading Nicaragua Managua/Washington DC 'OF THE people who were cheering you today,' I inquired of a Sandinista friend on...

The dangers of allowing an American to get drunk, by Rowlinson Carter A CALIFORNIAN motorist on his way home after a night on the town last year stopped at a bar for a nightcap...

Richard West finds the candidates avoiding the real concerns of the voters LAST week's Observer had a cartoon of gnomic obscurity, showing a man with a bag marked 'Paul...

Andrew Brown meets the Bradford headmaster suspended for 'racism' ANYONE who reads the right-wing pap- ers will be aware of the outlines of the 'Honeyford case': Ray Honeyford...

LIFE AMONG THE RUINS

Gerda Cohen on the relics of the Black Country's traditional trades UNDER a scudding sky, the Black Coun- try turned out beige, and quite clean. This was somewhere between...

The press: Paul Johnson's golden rule of caption-writing LAST month I was struck by a remarkable picture published on the back page of the Times. It was a photograph, taken...

Enter Chancellor surrounded by heffalump traps JOCK BRUCE-GARDYNE 0 ne of the odder memories of my brief and inglorious incarceration in the Treasury was an occasion when I...

THE City's great new gilt-edged market has emerged with 29 players and £600 or £700 million of capital. All it needs now is some orders. A skilful whittling process has narrowed...

A match for Marks

THE Great bid bubble floats on, and what do we find this week but a curiosity — a merger which seems to serve a commercial purpose. All around us, companies are happily moving...

Nearing high noon in Fenchurch Street, deep in the heart of Texas CHRISTOPHER FILDES L . Texas is not a geographical express- ion, though some British shareholders may have...

Sir: What a wonderful vignette of the British Establishment is given on your letters page today (15 June)! If Andrew Gimson is not consoled by Stewart Steven's letter, he might...

Sir: Richard West's piece in the Spectator of 8 June (Prom great port to piggery') can only be described as a hymn of hate. It was vitriolic and nasty, the sort of piece one...

Sir: Your editorial of 8 June entitled 'Nicaraguan aid' was inaccurate and mis- leading. To set the record straight: in March this year the Disaster Unit of the Overseas...

SUBSCRIBE TODAY! 1 would like to take out a subscription to The Spectator. I enclose my cheque for £ (Equivalent!, US& Eurocheques accepted) RATES: 12 Months 6 Months...

Colin Welch will resume his column next week.

Friend of empires and ragamuffins John Keegan NEVER TO BE TAKEN ALIVE: A BIOGRAPHY OF GENERAL GORDON by Roy MacGregor-Hastie Sidgwick & Jackson, f13.95 THE GORDON HERITAGE...

Unfortunate spinsters down under

Margaret FitzHerbert THE GOVERNESSES by Patricia Clarke Hutchinson, £12.95 F or those who sometimes lie awake in the small hours of the night, feeling a little at odds with...

Apples, a dead baby and orphans

David Profumo THE CIDER HOUSE RULES by John Irving Cape, f8.95 F or a writer like Irving, whose sen- timentalism and graphic violence are equally celebrated, the choice of an...

Ambrose Evans-Pritchard WEAKNESS AND DECEIT by Raymond Bonner Hamish Hamilton, f13.95 T hey were priests and their catechists, teachers and their students, carpenters and...

The patron saint of historians

Eric Christiansen F. W. MAITLAND by G. R. Elton Weidenfeld & Nicolson, £12.95 I t is strange that two of the most arro- gant men in England are Tudor historians. You would...

Epstein and the constable

Tractors wobble like siege-towers over the slit trenches of the furrows; uncomprehending birds founder through invisible obstacles of shot, and the elms are led away like...

One that got away

This little old lady I meet Has nothing to do with poetry Coming home late from work I pass her Say once a week, maybe it's a Thursday. She is entirely dressed in red Not...

End of term Peter Phillips W ith little provocation anybody who admires English things may speak with feeling about our choral tradition, now unique in the world. Similarly,...

Birdy (`15', Odeon, Haymarket) Strictly for the birds Peter Ackroyd H ey you, bird boy!' are the first audible words in this film; they are suc- ceeded by the image of a...

Phone-ins on the brain Noel Malcolm L istening to last Sunday's first creak- ing instalment of Kidnapped (Radio 4, 9 p.m.), I was reminded of the only time I have ever written...

Figaro (Ambassadors) Golden Girls (The Pit, Barbican) Placebo effect Kathy O'Shaughnessy D ue to Amadeus Mozart is nearly a pop-star (as the Requiem pulsates out of...

Sports coverage Peter Levi T urning aside from worthier program- mes, I have viewed sport. At Christ Church in the good old days there used to be a vast and gloomy television...

Beyond a choke Taki T he small cast I've been wearing on my right hand (compliments of a strong kick by an ambitious brown belt) came off last week, but my plans to spend the...

An uninvited guest Alice Thomas Ellis S he walked idly under the overhanging branches of the weigela, pushed open the gate with a nonchalant hand and, humming a light air,...

Small mercies Jeffrey Bernard A few minutes ago I asked She who would drown in my eyes to scramble some eggs and she claimed that I treat her like a geisha girl. Then, when I...

Meanwhile, on the pitch . . . P. J. Kavanagh W hat marvellous news it is, that English football clubs have been banned from Europe indefinitely. It will save me from having...

On your marks David Spanier I n most sporting contests when the two finalists come together, the chances are about equal. I am thinking particularly of boxing, where the...

Jaspistos reports: Competitors were asked for an acrostic poem, the first and last letters of each line, read vertically, spelling out The Spectator and New Statesman. A chorus...

No. 1377: Terrible twins Set by Jaspistos: According to the Times, London and Managua, the capital of Nicar- agua, are soon to be `twinned' cities. An exchange of letters,...

IT IS a pity day outings are associated with charabancs, brown ale and serial mass urination, dignified, I am told, by the term `comfort stops'. There is a different outing, a...

UNTIL last week, I hadn't gone to Wimb- ledon since

I went on a school journey to see Evonne Goolagong play in 1972. I can remember hardly a thing about it neither who she was playing nor whether she won — but I do know I haven't...

There is now a charge of £1 per insertion (max. 2 books). Cheques made pay- able to The Spectator. Please send details to Books Wanted, The Spectator, 56 Doughty, Street, London...