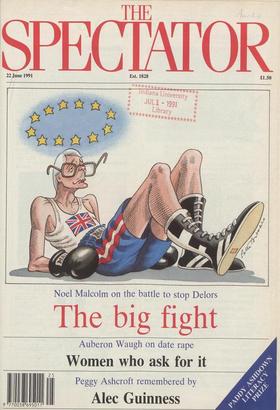 JOHN MORTIMER W hat can explain the huge increase in telephone tapping in an allegedly free soci- ety? It seems unnecessary when, thanks to British Telecom, you only have to...

The problem of women who say 'yes' when they really mean 'no' AUBERON WAUGH S ome weeks ago the Observer carried an excellent article by its Washington corre- spondent, Andrew...

Euro-sceptics are not the real splitters in the Conservative Party IN THE fable, the little boy who cried `wolf ended up being eaten by one. Fables are simple things, with...

Ian Buruma explains the strange affinity between Red China and Hong Kong businessmen Hong Kong IT WAS a perfect, cloudless day in Hong Kong. We were sitting under a marquee on...

William Dalrymple attains the goal of his journey on foot — Compostela Santiago THE monks were in their fields, planting cabbages with the air of old Edwardian gentlemen...

Janine Di Giovanni took treatment to slow down the aging process and found she had fewer colds A FEW months ago, I received a letter in the post from Clinique La Prairie in...

READERS are invited to indicate the grammatical errors in the following letter from the leader of the Liberal Demo- crats. A copy of Fowler's Modern En- glish Usage or a year's...

THE Omnibus Strike in London ended on Saturday, and on Monday the men returned to work. They have secured the shorter hours, and the right of a day's holiday in the fortnight...

persist . . . AS EVERYONE remarks who is about to generalise wildly, one must not gener- alise, especially about nationality. In- deed, one must not; but the plain fact,...

LET THY WORDS BE FEWER

The press: Paul Johnson on the way in which photographs are taking over quality newspapers ARE Britain's quality daily newspapers going downmarket? The question is worth...

MANCHESTER, as you may know, is the Osaka of the Occident. Watching the Murdoch press excoriate the banks — we name the guilty men, write to your chair- man now — I thought of...

A MONTH into the phoney war, and Imperial Chemical Industries has the early advantage. ICI has assumed, ever since Hanson turned up on its share register, that this war is real....

Rupert, Mary and I have a winning wheeze family silver for Number 10 RISTOPHER FILDES CH S ilvery tinkles bring me cheering news — my Downing Street wheeze is working! It...

OH DEAR — the Securities and Invest- ments Board, which moved into its garish new office at the end of last year, is still stuck with its old one. Any takers for a...

ALAN WHITTOME, knighted in the Honours List, booked his place in history in sterling's worst crisis, 15 years ago, when Britain had to make terms with the Inter- national...

8 June) is fully justified in saying that 'you would be hard put to find one [professional theologian in the Western world] who believed that the historical Jesus claimed to be...

Sir: Ian Buruma (`Hopeless in Baza', 4 May) alleges that

Sir: I welcome your article on the case of the four unjustly convicted Armagh UDR men (Penalising Protestants', 15 June). As Sandra Barwick says, theirs has been an uphill...

Israel's shout Sir: Painting the squalor and despair in the Gaza shanty towns with an artist's brush, Ian Buruma (`Hopeless in Gaza', 4 May) would not dream of pointing a...

Sir: Once again Antony Lambton (Books, 8 June) has gone to press on the subject of Lord Louis Mountbatten. The last time was on 13 May 1990, when the Times published a...

says (`The Kitty Kelley of Galilee', 8 June) `that nowhere in the New Testament is it stated that Jesus claimed to be God'. Jesus' reported words include 'he that hath seen me...

Sir: I often admire articles written by Christopher Fildes and his recent commen- tary in The Spectator contained his cus- tomary balance (City and Suburban, 1 June). However,...

Sir: Without wishing to become embroiled in any debate about 'government support for the police', may I make one or two points about Simon Heifer's article (`The Force is not...

Sir: 'It is certainly a quotation all right', Colin Welch says in condemning the phrase 'the necessary killing' which he attributes to a `blood-chilling poem' by Auden (Books, 8...

Sir: Hilary Corke exposes much of Heaney's verse as pretentious nonsense, and tells us that it is not poetry but `gestures towards poetry' (Books, 8 June). But poor judges in...

Sir: I think Colin Welch was looking at the wrong

menu when he was tucking into Auden (Books, 8 June). He wasn't a fishcake in the snow, he was a wedding cake that had been left out in the rain all night. Much more elaborate....

Sir: David Parsons (Letters, 18 May) has either fallen into the etymological fallacy or failed to notice that English words often have more than one sense. Certainly, following...

Sir: I refer to your editorial 'The limits of Prudence' (18 May). The Americans have attempted an imaginative solution to the paradox of declining wages and benefits for workers...

Sir: There is a special hell reserved for those who thank God that they are not as other men are through the use of `(sic]'. Occasionally, however, Nemesis catches up with them...

Sir: It is a pity that your comment on the John Drummond v. Nigel Kennedy bout should begin with two errors of fact (Lead- ing article, 15 June). John Drummond did not...

Sir: Rory Knight Bruce, wearing his hat as editor of the Evening Standard's London- er's Diary, writes of his distaste for Hew Kennedy's escapades with his siege engine...

Fear no more the frown o' the great

John Zametica OPEN LETTERS: SELECTED PROSE by Viclay Havel Faber, £17.50, pp. 415 T here is a famous story about a meeting between Stalin and Bela Kun, the Hungari- an...

She put it up her nose and blew it

Bright with names that men remember

Peter Quennell PORTRAITS FROM LIFE by Edmund Gosse Scolar Press, £25, pp.200 I n his later years, Sir Edmund Gosse, once Librarian to the House of Lords, was evidently well...

Parviz Radji MAJESTIC FAILURE: THE FALL OF THE SHAH by Marvin Zonis University of Chicago Press, 129.95, pp.350 O t the mass of books that have appeared since the Iranian...

The making of an Englishman

Nicholas Coleridge SLIDE by James Buchan Heinemann, £12.99, pp.135 J ames Buchan has written a very slim book, described on the cover as a novel, but actually a collection of...

A dance on the precipice

You come back late and listen to a CNN reporter, mike extended through a window, wafting the sounds of war into the shelter of your living room — alliterative bombs or 'Triple...

The passionate intensity of a classicist

Hugh Brigstocke A nthony Blunt's view of Nicolas Poussin as pictor philosophus was originally conceived as a direct riposte to Roger Fry, who had brushed aside the French...

Genius loci Robin Holloway O ne advantage of the Aldeburgh Festi- val (others being the continuing adventur- ousness of the programmes and the flair with which they are...

Catch the running gag Gabriele Annan J ames Dearden's A Kiss Before Dying is a smooth, efficient thriller with a firm moral stance and no heart. Not that thrillers need...

A lass unparallel'd Alec Guinness remembers 50 years of friendship with Peggy Ashcroft I am pretty sure that Peggy Ashcroft con- sidered the high point of her career to have...

Seeing blue Martyn Harris T he men from Cable London arrived this week to drill a hole in our garden wall: our magic doorway from the sleepy hamlet of BBC and ITV out into the...

Under pressure Jeffrey Bernard A couple of months ago I had the opportunity to move into a good flat in Swiss Cottage. I turned it down in favour of another in Soho. It was...

Blood, sweat and oil Taki I find it splendidly ironic that the Naval and Military Club, once the home of Lord Palmerston at 94 Piccadilly, may be forced to vacate the premises...

Mal de mere Zenga Longmore T he French food is great, like. You get this amazing lamb chop thing with sauce. Wish I could recall the name something French, if I remember...

`I MEAN, OK, I understood there was a recession on,' I overheard one man say to another in the Groucho Club the other night, 'but I didn't believe it had got this bad: do you...

The game of the name Raymond Keene I have a modest proposal, namely that in order to accelerate the process towards official recognition, started by the citizens of St...

Hats and squiggles Jaspistos 1 12 YEAR OLD SCOTCH WHISKY I n Competition No. 1681, in view of the fact that the circumflex and the tilde, officially, and the apostrophe,...

Belloc's poem against the 'remote and ineffectual Don/ That dared attack my Chesterton' was, in his words, 'a Rhymed Octosyllabic Curse'. You are invited to write one of up to...

Just getting down to it Frank Keating THE belated CBE for Cyril Washbrook in the birthday honours list was doubtless dreamed up one drizzly day at Old Traf- ford by John Major...