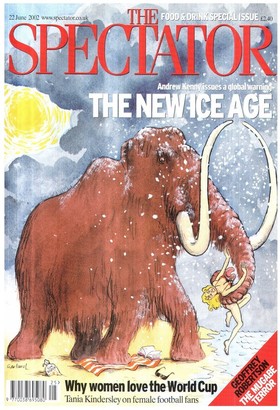 a medical charity for Palestinians, with the Queen of Jordan, said, with reference to suicide bombers: As long as young people feel they have got no hope but to blow themselves...

N othing except a battle lost can be half so melancholy as a battle won. Thus the Duke of Wellington after Waterloo: and it is in a similar mood that this magazine surveys the...

H owever you look at it, and from whatever angle. Tokyo

is a calorific blend of the fabulous, the mildly baffling and the completely alien. It is a city which plays with the future while always taking care to acknowledge the past....

PETER OBORNE F WI summer in all its glory arrived in London last week. But there was a tetchy feel at Westminster. The government is drifting to the end of one of its thinner...

If you want to see Labour getting a soft ride, look no further than the news pages of the Times

STEPHEN GLOVER T o hear some people talk you would think the whole of the press was lined up against the government, and gunning for Alastair Campbell. It is not like that at...

PREPARE FOR THE BIG CHILL

A new ice age is due now, says Andrew Kenny, but you won't hear it from the Greens, who like to play on Western guilt about consumerism to make us believe in global warming...

THERE IS NO ALTERNATIVE

Mary Wakefield talks to the Republican hawk Peggy Noonan, and finds her single-minded and certain in her pursuit of evil New York PEGGY NOONAN, one of America's most revered...

`LOOKING for a job?' asked my husband when he found me putting rings round items in the Guardian 'Society' job vacancies. There were 134 pages of them last week, from local...

AS everyone knows, multiculturalism means universal tolerance and goodwill: though — in the words of St Augustine in connection with his wish that God should make him perfectly...

THE KING OF BOSNIA

Paddy Ashdown must feel that power is finally his, says David Chandler. Why else would he sack Bosnia's deputy prime minister? A FORTNIGHT after taking over as Bosnia's...

Tania Kindersley says that women are whooping for the World Cup because they like real men and romance SOMETHING curious is going on in this World Cup. Not just Les Bleus...

THE mathematician Stephen Hawking wants engraved on his tombstone not an epitaph but a formula relating to his work on black holes. He is not the first to have thought in this...

Dear Sir, in response to your request, here's a poke in the eye from Sharp Stick

CHRISTOPHER FILDES T he affair of Her Majesty's gas bill continues to reverberate, with attention focused on Major Alaric Cheesecutter-Hatt, who holds the historic office of...

From Mr Guy Walters Sir: The following sent a chill down my spine: 'He failed .. . because he cared only for the facade. This was a government of the media. by the media, and...

From Mr Dennis L. Bird Sir: Peter Obome (Where is Black Rod's killer memorandum?', 15 June) writes that 'the Independent newspaper revealed how civil servants have been told to...

From Mr David Vance Sir: Andrew Gimson's article (The end of Protestant Belfast', 15 June) draws together many of the correct facts but arrives at the wrong conclusion. The...

Pizza in our time

From Mr David Page Sir: Our pizzas (`The great Pizza Express scandal', 15 June) have been the same size since 1965. For 20 years a whispering campaign has maintained that they...

From Mr Phil Batten Sir: What's all this about Pizza

Express not playing deafeningly loud music? We sailed to Guernsey and took our crew to the newly opened Pizza Express. They had run out of the house red wine, the pizzas were...

From Mr Richard Bunting Sir: Neil Clark ('Judge not', 8 June) accuses Amnesty International of pushing a 'politicised agenda' and 'all but destroying' the movement's tradition...

From Mr Steve Crawshaw Sir: Blimey. And there was me

thinking that Human Rights Watch, which I joined recently as London director, could be proud of its record in speaking out against regimes behaving badly all over the world,...

From Mr Halvor Rosholt Sir: I am doubtful whether Michael Henderson's considered but selective piece (Sport, 8 June) on the tragic death of Hansie Cronje advances the debate...

From Mr Adam Zamoyski Sir: Paul Johnson ('And another thing', 15 June) might also have mentioned that gazza. the Italian for magpie, is the word from which the first...

From Mr C.D.C. Armstrong Sir: Andrew Gimson (`Germany isn't working', 8 June) seems dismayed that Germany has 'no rock music whatever'. Is this not one reason for admiring, not...

Without weapons of mass destruction, the subcontinent would be a lot less stable

MATTHEW PARR IS T wo cheers for weapons of mass destruction. If India and Pakistan were not nuclear powers, there is a good chance they would now be at war. I can think of no...

Hands off the bishops' palaces, you contumacious Roundheads!

PAUL JOHNSON T he latest manifestation of the Clerical Cringe, that self-abasement before Political Correctness which is destroying the Anglican Church, is a proposal to expel...

Buy the barrel, for peat's sake

Robert Gore-Langton fears running out of his favourite malt IT's easy enough to buy an expensive malt whisky. But why have a single bottle of the good stuff at the back of the...

Sam Leith New York I ALWAYS envied my friend John, Now a senior manager with Price WaterhouseCoopers, his rapid promotion within that company was as nothing to the success he...

Grubs treat Vanessa Tyrell-Kenyon THE petrol-pump attendant fixed me with an intense yet somehow vacant stare, and shuffled across the deserted forecourt. .Aha! You must be...

Widow's might Jonathan Ray THE tediously regular invitations in my email inbox to double the size of my wedding tackle, halve the size of my overdraft, and see pictures of...

Micro economics Joe Drury IT's official. The British Beer Belly is a myth. The average British male may carry a bit of padding round his waist, but new research says beer is...

Spotting the insiders and outsiders

Politically, if not poetically, correct

Refusing to give the salute

A hell of a story

Mark Steyn on the composer Richard Rodgers on the centenary of his birth R ichard Rodgers had his first song in a Broadway show when he was still at high school. He wrote his...

Lucian Freud (Tate Britain, till 22 September) Looking hard Martin Gayford H alf the point in painting a picture, Lucian Freud has remarked, is that you don't know how it is...

Venus jigsaw Susan Moore W hen the 29-year-old William Weddell acquired a marble statue of Venus in Rome in 1764, he paid the dealer Thomas Jenkins an astronomical but...

Folk fortunes Charles Spencer Y ou are to imagine me this week with straw sticking out of my hair and a pint of regrettably alcohol-free Scruttocks Old Dirigible at my elbow....

Hypnotic attraction Simon Hoggart N ow and again, when a special effects film is coming out, the tabloids run a feature about the stars' make-up. 'It takes four hours to turn...

Fitting in Michael Vestey T he new series of Radio Four's On the Ropes, featuring people who've been up against it, began in lively fashion this week (Tuesday) when John...

Morals and economics Robin Oakley T he BBC made such a hoo-ha in advance about the Kenyon Confronts examination of racing that I was expecting something altogether original....

Trouble in Soho Taki W here was I? It's been a rough week. Following Robert Miller's and King Constantine's bash at Annabel's — more about that later — I found myself...

Sleeping rough Jeremy Clarke N ormally I have my boy and his halfbrother to stay at weekends, but my boy's mother doesn't allow him to stay with me while I'm staying at...

Who needs friends? Petronella Wyatt I was in a rather chirpy mood the other day, when somebody said to me, 'I was defending you at dinner last night.' Immediately my mood...

I WAS going to beguile you with a Proustian evocation of dinner at Les Pres d'Eugdnie. Michel Guerard's triple-rosetted palace of gastronomy in the Landes. 'The foie gras en...

Buffoonery on the box

Michael Henderson HERE'S a tricky one. Who do you think is the bigger buffoon: Jeremy Vine or Charlie (gizza job) Whelan? Both men have distinguished themselves during this...

Q. At this time of the year I find myself

invited to three or four drinks parties a night. Bearing in mind the travelling time between the parties, what is the drill about which one you should go to first? (Literary...

Q. My father was very old when he sired me

and my sister, and as a consequence there are whole tranches of people we have never met. When someone is chatting to me at a dinner party and pauses before starting an anecdote...

make the little darlings sick. I find few of today's children know the rules of pub cricket (invented before the advent of motorways). The car divides into two teams, one of...