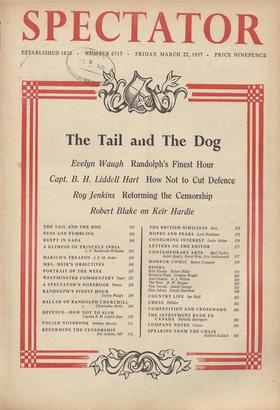 THE TAIL AND THE DOG

W ITH the shipbuilding strike firmly begun, guerrilla strikes pending in the engineering industry, and the railway workers pressing to join in, there are all the symptoms of...

H AVING got itself into an impossible position over Cyprus, the Government may be ex- cused some anxious efforts to keep face; but it is hard to excuse the fumbling over the...

T HE various diplomatic manoeuvres which have been going on over the Gaza strip illustrate strikingly the advantages to be gained by a man who knows his own mind when dealing...

A Glimpse of Princely India

By L. F. RUSHBROOK WILLIAMS Bombay circle : one belongs—or one does not. Wide differences of outlook, traditions and birth mark off the aristocracy from the middle classes into...

By J. E. M. ARDEN rr HE Harich case in some ways gives the clearest view we have yet had of the disintegration that has set in in the Communist world. It is not that he himself...

Conclusion number two is that if President Eisenhower should slice his second at the sixteenth and let Mr. Macmillan have the full force of a number two iron in the seat of the...

THE backcloth of inter- national affairs has been rapidly changed from Capitol Hill to the Ocean Club, Ber- muda, where President Eisen- hower, Mr. Dulles, Mr. Macmillan and Mr....

ALL-PARTY COMMITTEES at the House of Commons tend to be

rather dreadful things, oozing bon- homie at every pore. 'This thing,' they say, 'is above party politics' (what do they expect it to be—below?). But one must make an exception...

AT LUNCH the other day I heard Sir David Robertson

giving his reasons for his North of Scotland Development Bill, which was talked out in the Commons last Friday : a few hours later I was listening to some of the crofters of...

▪ LESS THAN A WEEK after Mr. Butler's • impressive speech on prisons, the Government's Homicide Bill com- pleted its journey through Parlia- ment. Not even the Lord Chancel-...

AS SIR LINTON ANDREWS points out in a letter to

the Editor this week Mr. Randolph Churchill has not yet reported to the Press Council the refusal of the Yorkshire Post to accept an advertisement for his book. All he has so...

THIS KIND OF TALK infuriates the crofters, and such of

their spokesmen as Sir Compton Macken- zie—who denounced the project in the Spectator a couple of years ago. It got by then, they claim, because the RAF assured them that the...

LONG BEFORE Miss Nancy Mitford was heard of, the English

system of titles has been a stumbling- block to foreigners. In their early book, The Holy Family, Marx and Engels were able to jeer at some length at a German philosophical...

I can't imagine why they print the stuff. I never dream of reading it, do you? The fellow's little better than a tough. I don't believe a word of it is true. That tale about...

By EVELYN WAUGH N o one who knows Mr. Randolph Churchill and wishes to express distaste for him should ever be at a loss for words which would be both opprobrious and apt. When,...

Defence How Not to Slim

By CAPTAIN B. H. LIDDELL HART U NT M a year and a half ago the British Army j of the Rhine comprised three armoured divi- sions and one infantry division. That ratio was...

By ANTHONY HARTLEY n ERHAPS it is a little naive to be surprised at r the extent to which Warsaw is rebuilt. After all, it is ten years since the war. But cities with 85 per...

By ROY JENKINS, MP O N Friday, March 29, the Obscene Literature Bill, introduced by Lord Lambton, MP, comes up for the second reading in the House of Commons. It is the first...

Is the fragile bark that's me, Tossing on the stormy sea At length to harbour drawn? Does the walker in the night. Groping in the uncertain light Glimpse at length the dawn?...

By STRIX T HE other day I put through a transatlantic telephone call to my home in England from a place in New Brunswick. `I'll call you back,' said the friendly, courteous...

-By LESLIE ADRIAN 7 SHALL look at Mr. Raymond Postgate, when I next meet him, with a new respect. I have occasionally made use of his Good Food Guides in the past; but this...

SIR,—Mr. Nigel Nicolson, with that good humour which has characterised his behaviour throughout the Bournemouth-Suez controversy, styles himself a 'constitutional oddity.' Maybe...

SIR, —In your leading article of February 22, you had stated that the Cyprus brand of terrorism 'arises when a nationalist movement which wins general support from the community...

ANIMAL TELEPATHY Niall finds it inexplicable that starlings have a

wonderful capacity to act in unison. Gumbril Senior in Huxley's Antic Hay suggests telepathy as the explanation. I think telepathic com- munication between animals and man, or...

THE OTHER EUROPE SIR,—In your editorial of March 8 you

talk of the desirability of negotiating with Moscow, as Professor Seton-Watson has already suggested, in order to create a neutralised, re-unified Germany and, in return, as a...

SIR,—Angus Maude is in the wrong field and even suggests that Labour might lose the next election through Gaitskell's 'tactical ineptitude.' But tactics are unimportant just...

SIR,—I am collecting material for a new study of Kenneth Grahame, the author of The Wind in the Willows, and would be glad to hear from any of your readers who possess...

SIR,—Have you seen the latest advertisement extolling the pleasures of

travelling by British Railways? It depicts a lady accompanied by her little girl occupying a lavatory in one of the corridor trains. It would be nice to know on what routes such...

SIR, —Last Saturday I was sitting on our tiny village station.

It was a lovely day and the platform was bathed in glorious sunshine. But the golden light fell upon a sad, oh! such a sad landscape. The drab green and yellow paint was peeling...

FAIR DEAL FOR THE CLERGY

SIR,—As an incumbent of fifteen years' experience and as a country parson, I dotiot think that the breaking-up of the parochial system will help the Church at all spiritually....

SIR,—Amid all the troubles that afflict the nation it is most kind of Pharos to spare me a word of sympathy in my supposed embarrassment from the complaints of Mr. Randolph...

The James Brothers. (Rialto.) The Wings of Eagles. (Empire.) FROM Robin Hood to Giuliano, bandits—those mixed-up kids of the greenwood—have a peren- nial appeal; and the James...

What is English Art ? THE Stubbs exhibition at the Whitechapel Gallery has excited an exceptional re- sponse. It is worrying to find a painter in whose work the outside...

MARCH 24, 1832 The street-keepers are about to be extinguished in their last stronghold—the City. They are to be superseded by a new police, which is to patrol the streets by...

The Iron Duchess. By William Douglas Home. (Cambridge Theatre.)—A Hatful of Rain. By Michael V. Gazzo. (Princes.)—The Wit to Woo. By Mervyn Peake. (Arts.) ONE has the feeling...

ALL these months, it seems, the BBC has been trying out com- mercials of its own. The very first of these was published in this week's Radio Times. 'How does the impression get...

Our bottoms are not purple. But imagine a mandrill Come like John Mandeville To report on this people. He finds despisal of fur, 'Respect for the false, Hate of fleas And love...

Keir Hardie By ROBERT BLAKE TN the one room of the tumbledown thatched 'cottage with the mud floor, which was little more than a shelter from the cold and the rain, the...

THE political storm over the British and French action at Port Said has tended to overshadow the Israeli Army's campai g n in the Sinai Penin- sula. This is a pity, for Robert...

THE latest addition to the admirable Reynard Library is a Newman volume. In some ways it is a disappointin g one. But it is always hard to know in reviewin g a book of...

There is a Happy Land. By Keith Waterhouse. (Michael Joseph, 12s. 6d.) WITH good reason, though not perhaps with perfect propriety, it might be said of some novels that they are...

Those Were the Days

IT would be difficult—indeed, it would be almost impossible—to recognise in Maurice Wiggin the author of In Spite of the Price of Hay (Phoenix House, 16s.), a meandering,...

THE raison d'etre of a grand couturier is, I take it, to clothe his clients suitably and to enhance their beauty in doing so. After reading this remarkable book, however, I find...

The Force of Law

HERE again, with Much in Evidence (Michael Joseph, 12s. 6d.), and an eye cocked skilfully on such potential future patrons as the Boulting Brothers, comes Mr. Henry Cecil with a...

I r is not so many years ago since the practice of pri- vate confession in the. Church of Englund would have been regarded as the mark of an extreme Anglo- Catholic, not to say...

Even before the lawn will bear a mower, and grass is growing fast at this moment, good work can be done by pricking out weeds such as plantain, dandelion and daisy and...

By IAN NIALL A PEW days of mild weather certainly make a great difference. Before lamb-like March came in there was no hint that the garden was quite so ready to bloom, but now...

When an acquaintance who has not been living in the locality for long asked me where he could cut himself some brushwood to protect his newly sprouted peas I passed on the...

'1 wonder if you can help solve a conundrum for us in our garden?' asks a Hampshire reader. 'On one special gravel path a number of little heaps of gravel have appeared and the...

SPECTATOR COMPETITION No. 368 Report by Blossom Competitors were invited to provide three continuous ckrihews that might have been used between one of the following pairs:...

I used to love my garden

But now my love is dead, • For I found a bachelor's button In Black-Eyed Susan's bed. The usual prize of six guineas is offered for a four-line epigram of disillusionment with...

THE INVESTMENT RUSH TO CANADA

By NICHOLAS DAVENPORT A CITY invitation to see a colour film on the laying of the gas trunk Z e i ;, pipeline in British Columbia re- minds me that a comment on the in-...

By CUSTOS ANOTHER 'black Monday'! Because the stock markets refused to take the trouble in the shipyards seriously last week the slump in prices was all the more severe. The...