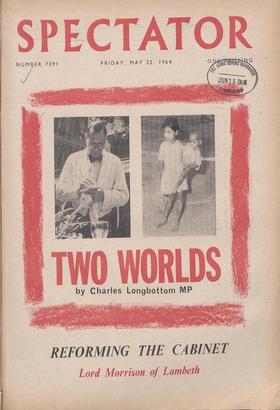 INCREASED MEANS and increased leisure are the two civilisers of man, according to Disraeli. But once again the teenage gangs saved the newspapers' lives by providing column- fi...

Divorce and the Law

HE commission of inquiry on divorce I appointed by the Archbishop of Canter- bury, with the debates and the pronounce- ments on birth control, are warning signals that the...

DISMOND S FEW ART writes front Cairo: As if to balance the ponderous statistics of the High Dam, the speeches in Aswan have been long. Nearly always starting late, they have...

Notes on a Five-Day Visa

By J. W. NI. THOMPSON I T is not possible, unhappily, to promise every visitor to Moscow that his journey will be re- warded on touchdown with the sight of a large, red-faced...

Morale Philosophy By DAVID WATT P oirriciANs really are (apart from actresses and conceivably women's fashion writers) the most volatile creatures in the world. A month, even...

But Not Without a Plan

N OTHING in Poland is simple, either in every- day life which is a ceaseless teeth-grinding struggle with a complicated, often stupid and sometimes meaningless bureaucracy, or...

Gloria and the Governor

F rom MURRAY KEMPTON CAMBRIDGE, MARYLAND T HE Governor of Alabama's invasion of the Northern presidential primaries was as cruel an illumination of white resentment of the...

The Two Worlds By CHARLES LONGBOTTOM, MP frj N June 27, 1962, the Duke of Edinburgh launched the Freedom From Hunger Campaign. This ceremony was the culmination of months of...

What is a Social Event? The question has hovered in my mind this week because of what 1 read in the Sunday Telegraph. This newspaper has a special column entitled 'Social...

L ost Luggage At any given inoment, so Time tells me,

some 2,50 0 pieces of US luggage are somewhere they sh ouldn't be. In America they have a computer to sort things out. All 1 had when I found myself with someone else's suitcase...

In the first 'Spectator's Notebook' that I con- tributed I drew attention to the claims of Santa Claus, the Irish-trained son of Chamossaire, as a winter favourite for the Derby...

'We will fight on the beaches . . . we will fight in the streets. ' Twenty-four years on, the louts at the seaside and the hogs on the roads have written a sar- donic footnote...

Morley Callaghan, who writes this week in our book pages on Hemingway's posthumous, long- awaited volume on Paris in the 1920s, A Moveable Feast, is a survivor of those...

One of the arguments used by .Mr. Harold Wilson against the Prime Minister's decision to hold the election in October was that the last few months of a Government induced a...

By LORD MORRISON OF LAMBETH N o - r for the first time, a foreigner has written an able book on British Cabinet government or British local government. This is.Cobinet Reform...

The Monarchy of Ben

An Excuse for Rage

By HENRY FAIRLIE rr HE thing which interests me most about the I incidents at Margate and Brighton during the Whitsun holiday is the savagery of so many adult reactions. By...

By MALCOLM RUTHERFORD But if it was possible to read a slight journal- istic disappointment into the reports that nothing Was happening, it does not seem to me that this was...

SIR. 1 take issue with Quoodle. In your last issue,

With reference to Caroline,. he said 'Naturally the Labour Party want to stop people listening to what they choose to. but it .passes comprehension how Mr. Bevins thought he...

'OUTRAGE' AT ST. PAUL'S SIR,—May we add to the many

protests already made concerning the projected buildings round St. Paul's Cathedral. It is difficult to believe that any respon- sible and competent public body could have...

BY THE HANDICAPPED SIR,--Your readers may be interested to know

that I have been asked by a firm of publishers, Geoffrey Chapman Ltd. of London, to prepare a book of essays by physically handicapped people. We want contributions of about...

SIR, As a reporter of the provincial press of many

years' service but of no distinction, I have, in my later years, sometimes been disturbed by the duties which reporters are called on to perform to meet the demands of public...

SIR,—An Anglican theologian in the current issue of the Irish Catholic periodical Doctrine and Life states, 'Episcopal pronouncements and letters to the press seem to be couched...

MR. WYNNE AND THE PRESS

SIR,--I wrote to the Spectator, as one of the jour- nalists concerned, to protest at Mr. Randolph Churchill's attack on the press treatment of Mr. Greville Wynne. 'If there had...

Snt,—I am perhaps the last person who should seek to defend the good name of Mr. Alastair Hethering- ton, the Editor of the Manchester Guardian. His paper is the acknowledged...

Especially hard to convey with the right artistic detachment is the 'heartfelt' love affair, the one in which artist and audience are closely in- volved (though who with whom,...

A Flow of Houses

By TERENCE BENDIXSON Ford's genius lay in his recognition of the indivisibility of production and market. Although building houses and flats is not the same as making cars,...

FRANZ KLINE 'seems to epitomise the very essence of that New York paint- ing which flung abstract expressionism on to the world map. Paris found her century-old leadership I...

Back from the Lighthouse

By IAN CAMERON AMONG all the new waves at Cannes this year, the only one to acquit itself decently, apart from the French, was the Swedish. Both Raven's End (in festival) and...

The Birds. (Aldwych.)— I Love You, Mrs. Pat- terson. (St. Martin's.) ANYONE who has sat through the Oresteia in a Greek amphitheatre, , numb on the plastic hassocks provided for...

The Way It Was By MORLEY CALLAGHAN rrHE book" opens with the young Hemingway I sitting at a café on the Place St. Michel, and straightway the old familiar and terribly deter-...

The Search for Enlightenment

A Message in Code : The Diary of Richard Rumbold 1932-61. Edited by William Plomer. (Weidenfeld and Nicolson, 36s.) MUTUAL friends tell me that Richard Rumbold had charm, but...

The SOcialist Register 1964: A Survey of Move- ments and Ideas. Edited by Ralph Miliband and John Saville. (Merlin Press, 30s.) THE British left has traditionally been less in-...

Members of the House

By .1. H PLUMB A LREADY there has been considerable public and private criticism of these volumes,* some of it unjust, a great deal of it ill-informed and most of it...

Death of a Marriage

Right from the start the taste of love was less Than wholly sweet, smirched with a bitterness That sometimes made him shudder like a man Who sees the sudden jaws of menace open...

By LOTHBURY F ROM last ■1/4 eek's issue (page 673) it will be seen that United Sua Betong Rubber has done well. In spite of a reduction of almost 2d. a lb. in the price of...

Not long ago I called attention to the growth possibilities of PILLAR HOLDINGS which moved up to 16s. 6d. and is now back to 13s. 6d. to yield 3 per cent on dividends and 6.3...

The industrial holding company is not popular with investors except the unique THOMAS TILLING, but I was impressed by the report of FIRTH CLEVELAND which showed a 50 per cent...

It is reported that the glass container is staging a c omeback. Becchams have taken their liquid s hampoos out of plastic and put them into glass. And the milk trade, led by...

By CUSTOS T itE Tory comeback in the by-elections brought a sharp recovery in the equity markets. The steady unit trust buying prevented the recent reaction, as I thought, from...

An Anti-Guide to Europe's Non-Attractions B y PETER MICHAELS Etntom has many holiday resorts which made their reputation between forty and eighty years ago, since when they...

By ALAN BRIEN I HAD hoped to smuggle this column into print this week without including the words 'Mods' and 'Rockers' anywhere in the text. I regret that this wilt not now be...