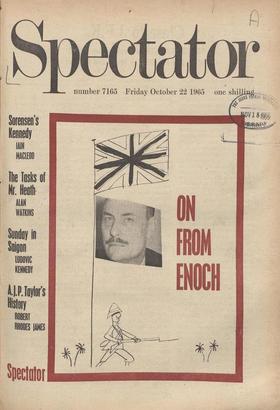 Portrait of the Week— IN HIS LATEST last-minute step before

a UDI Mr. Ian Smith wrote to Mr. Wilson asking for independence on the 1961 constitution and offer- ing a solemn guarantee that the constitution would be respected. It seemed...

M R. ENOCH POWELL has offered the Government a great opportunity, which one hopes it will have the courage to take. After his speech at the Conservative party conference last...

NATO How Fresh a Mind? DON COOK writes from Paris: If the latest diplomatic flutter between Britain and the United States over the NATO nuclear question has had any result at...

Transport Continuum OLIVER STEWART writes: Once again the season of motor shows is here. On the whole we shall probably be able to agree that real progress has been made in...

Simplicissimus CHRISTOPHER BOOKER writes: The present time is not a good one for newspaper columns. Not even the most devoted fans of, say, Messrs. Frayn or Cassandra —both of...

The Tasks Before Mr. Heath By ALAN WATKINS T ins period between the party conference and the next' session of Parliament is a- slightly melancholy one, rather like the week...

I who have rung a thousand years, Getting no answer, stand alone, Immune 4o all the hopes and fears Of Triumphgram and Triumphone. I care not how your lift behaves Or why the...

By LAIN MACLEOD CI OM ETHING will have to be done about the sheer 1,3size of American biographies. This one (Kennedy, by Theodore C. Sorensen*) is hard to hold. When I had...

KENNEDY A a journalist one never learns. From a distance every city at war seems beleaguered. alert, tense, its shops empty, its way of life austere. Yet often when you get...

Perhaps some of the London jails really will be sold up to make way for housing—the.suggestion put forward by George Hutchinson in the Spec- tator three weeks ago. The proposal...

T HAT admirable and infuriating paper the Daily Express knows very well that I neither . write nor direct the political column of the Spectator, but when it suits its grave...

Jonathan Aitken Resisting the temptation to comment on the speeches

in favour of the Salisbury addendum to the Rhodesia motion debated last Friday at Brighton, I concentrate on the speech by Jonathan Aitken against it. Few speeches made from the...

Garfield Todd Whatever else happens this week in Rhodesia, whether

Mr. Smith declares for a UDI this year, next year, some time or never, no one in this country will have any other words than those of contemptuous condemnation for Mr. Smith's...

Trial in Teheran A number of puzzling and disturbing circum-

stances surround the trial now going on before a military court in Teheran of fourteen young Persians. The prosecution has asked for the death penalty for four of them accused...

Dream Cricket Ideal conference bedtime reading is something as far

away from politics as possible. I took with me to Brighton •John Arlott's admirable Rothman's Jubilee History of Cricket 1890-1965 (Arthur Barker, 21s.), so that I thought about...

Another book I have read this week is a volume of memoirs by Sir Colin Coote (Editorial, just published by Eyre and Spottiswoode). Sir Colin was of course the managing editor of...

From MURRAY KEMPTON NEW YORK C ONGRESSMAN JOHN V. LINDSAY'S attempt to become the first Republican elected Mayor of New York in a generation was, first of all,.a re- flection...

Roll on the Corporate State!

By JOHN BRUNNER A NDREW SHONFIELD has written a very con- siderable (in every sense of the word) book.* It has a fine sweep to it, ranging over many countries and several...

The Troubles of Mr. Heath

SIR, —Alan Watkins says that Mr. Edward Heath's poor first speech as Tory Leader in the Commons, his premature dismissal of the National Plan ,and• his tete-a-tete with...

SIR,---Mr, Kyle seems to have missed the point about Aden. Surely the reason is quite plain. in one word--oil. J. JERVOIS

LETTERS TO THE EDITOR From : . Cecil Gould, Henry Tube, Tony

SIR,-- Far he it from me to take sides in

the 'battle' between the gentleman from Suffolk and Lilian Knapp and Claire Rayner, but is it not a fact that this same gentleman himself refuses to be tagged, styled or...

SIR,--I'm afraid Mr. Val Gielgud was too provoked by my opening sentence to read much beyond the first paragraph of my article. I said hopefully that 'drama is no doubt a sore...

SIR,—Your competitive-minded readers might like to know that we are running a competition based on Simon Raven's novel Friends in Low Places, which was reviewed in the Spectator...

Sta,—Your correspondent Mr. K. P. Humphries is inquiring only about computer errors in telephone accounts, and far more fantastic errors have been made in gas and electricity...

SIR,—My thanks to D. W. Brogan for page 294 in the Spectator of September 3. In what the USA calls 'the boondocks,' we love your magazine. LEE MCMURTREY 1029 Melrose, Walla...

SIR,—Publishers are not 'incredibly dilatory' in producing books (Spectator's Notebook,' October 8). For instance, as long ago as 1957 we published Paul Johnson's The Suez War....

SIR,—Apropos of 'The Miller's Tale' (Spectator, October 8), 1 think Henry Miller's description of the Greek character in The Colossus of Maroussi can equally Well be applied to...

SIR, —It would be difficult to argue with Hilary Spurling's assessment of Surrey's suburban middle- class. But its existence must not be denied: it turned out in force to see...

As a reader you may ,have the Spectator sent for a year to your friends, in any part of the world, as your Christmas or New Year Gift for almost half the normal subscription...

Orpheus rr HOSE genuflecting notices after the Orfeo I opening at Sadler's Wells, not to men- tion a glossy encomium of the work which had been printed by the • theatre itself...

Slipping Beauty T HERE is a terrible fascination about the latest Russian ballet film, The Sleeping Beauty, currently on view at the Odeon, Hay- market; it is fascinating...

For Whom the Bell Tolls ', BBC know what horse-lovers feel when the ',BBC leaves Wembley during the last round of jumps. My instinct last Friday, when BBC-2 broke off its...

By ROBERT RHODES JAMES M Y generation has tended to dismiss the period of English history between the wars with curt contempt as the years that the locusts had devoured. It...

AROUND Mrs. Gaskell there still hangs the halo of the Perfect Wife, an unfortunate burden for our time not helped by the 'Mrs.' that clings to her name nor by the portraits that...

Shakespeare's Southampton : Patron of Vir- ginia. By A. L. Rowse. (Macmillan, 45s.) A I:1:w years ago Dr. Rowse had a reputation as a knowledgeable historian of the Elizabethan...

Systems, Strategies, Options On Escalation : Metaphors and Scenarios. By

The. Fifties. By John Montgomery. (Allen and Unwin, 45s.) To fumigate the Communist plague the Ameri- cans are dropping some sanitary bombs,close to the Chinese border. British...

By CUSTOS HE bear squeeze inequity shares caused by I the reinvestment of money brought home from America by some Scottish investment trusts seems to have ended. The dollar...

Planning Under Fire By NICHOLAS DAVENPORT 'HE idea,' writes Professor lewkes, of Oxford. 'that governments possess the knowledge and power positively to determine the rate of...

Ranks of Tuscany By LESLIE ADRIAN The French turned their attention to this many Years ago and have devised a system which works quite well—in France. The Germans followed suit...

SOLUTION OF CROSSWORD No. 1192