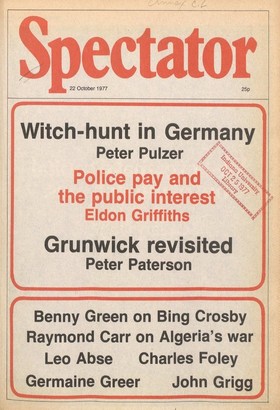 The West German government deserve the praise that has followed the action of their commandos at Mogadishu. In the past, their record of resistance to terrorism has been patchy....

The old country Ferdinand Mount Ideas whose time has come and gone don't usually receive decent burial. They are left to rust in the sand where they ran aground. The bones of...

Between news bulletins of the Lufthansa hijack, the BBC on Saturday showed Beethoven's opera Fidelio about a girl who d.-esses up as a man and takes a job as a jailer in order...

Open letter to Melvyn Bragg Auberon Waugh Dear Melye, First, may I congratulate you on your appointment to the Arts Council as chairman of the Literature Panel in succession...

Peter Pulzer Berlin It might be best to begin with the rescue of Colonel Kappler last spring. It was not quite a straightforward case. He was old and ill, though perhaps not...

Di lip Niro The attempt last Saturday to draft Mrs Indira Gandhi as the president of her Congress party never got off the ground. There was scant support for her among the 600...

Charles Foley Los Angeles Of the many ghosts haunting the American Dream, that of Charles Manson is surely the most persistent. Californians would like to expunge his memory...

Peter Paterson The mass pickets were outside Grunwick again on Monday, and the organisers promise that they will be there every Monday until the company gives in, or is forced...

Eldon Griffiths There is no longer any excuse for the Government to go on denying the police a fair pay settlement. The police need it, they have earned it and if it continues...

Leo Abse 'My Christian ideals are that I'm proud to be British and white,' Thus last week came the challenge from a chaplain at Brixton prison to his Bishop who had insisted...

The age of Mother

Christopher Booker Reading the plethora of comment on the two books chronicling the rise and fall of Jim Slater, I was struck by the implicit assumption in so many of the...

The City observed Nicholas Davenport Let us face it. Clever Jim Slater and the whiz-kids who imitated his unethical takeover and share dealing techniques were the greatest...

Sir: While normally I enjoy Richard West's contributions on South Africa, which portray a certain humorous sympathy with our various foibles, I feel that his article, The...

Sir: Some drama critics, like certain politicians, are skilful at making rash judgments. How 'else explain Ted Whitehead's curt dismissal (1 October) of one of O'Casey's finest...

Sir: In your edition of 8 October your contributor Marshall Mainwaring asserts that I accepted loans or directorships from the Commercial Bank of Wales. In fact I have not...

Enoch and the EEC

Sir: Mr Enoch Powell in Office before honour (15 October) is impatient of turncoats. In that case surely Mr Powell owes us a comprehensive statement on why he was at one time so...

Sir; If I might refer rather belatedly to Robert Skidelsky's would-be definitive estimate of the vocal and operatic talents of the late Maria Callas (1 Oct.), in his article he...

Sir: The British Pregnancy Advisory Service, which, oddly enough, seems to advise against pregnancy, proclaims in its advertisement 'Abortion! let the people decide'. The nub of...

No resting-place Raymond Carr A Savage War of Peace — Algeria 19541962 Alistair Home (Macmillan 28.95) Occasionally an epic subject encounters a fine historian. This the the...

Eugen Weber France, 1948-1945. Volume Two: Intellect, Taste and Anxiety Theodore Zeldin (OUP E15.00) Of making many books there is no end; and much study is a weariness of the...

Richard Farg her Chateaubriand: A Biography. Vol I (1768-93), The Longed-for Tempests George D. Painter (Chatto and Windus £7.95) In his friend Joubert's opinion, Chateaubriand...

Germaine Greer In the Lion's Mouth Kathleen Raine (Hamish Hamilton £4.95) Once sitting with her husband on a heather moor, Kathleen Raine's mother realised, as any LSD user...

Giving up in America

Benny Green Conan Doyle Hesketh Pearson (Macdonald and Jane's £4.95) The current campaign to make available once more the biographies of Hesketh Pearson is of course justified...

That kind of crooning Benny Green That Bing Crosby was one of the most widely emulated figures of the twentieth century seems beyond dispute; apart from Mickey Mouse, who...

Peasantry Clancy Sigal Padre Padrone (Camden Plaza) Silence is the star of Padre Padrone (X certificate). It rings like the bells of death over the bleak Sardinian hills where...

Jealous love Ted Whitehead The Fire That Consumes (Mermaid) Pillion (Bush) The Dragon Variation (Duke of York's) Touched (Old Vic) tell my mother everything about our...

Late Cezanne John McEvven Cezanne: The Late Work, which is at the Museum of Modern Art, New York, till the New Year and comes to Paris, though not alas London, next summer,...

Morons Richard Ingrams The new head of the BBC has so far failed to do anything to overrule the Corporation's rule that anything 'Not for Morons' cannot go until after 10.30....

Jeffrey Bernard I have in front of me an amazing article by William Rees-Mogg which appeared in the .October edition of Vogue; and is called 'My Day'. In it, Mr Rees-Mogg...