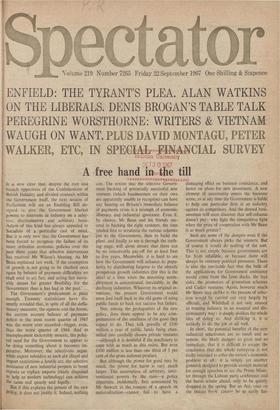 It is now clear that, despite the root and branch

opposition of the Confederation of British Industry and divided counsels within the Government itself, the next session of Parliament will see an Enabling Bill de- signed to...

It is important to be quite clear what the En- field schools affair is about It is not, as educationalists on both sides would like to make it, about the desirability or...

Failure by the Americans to fulfil their undertaking to buy British arms to set against the dollar cost of the F111 could, Mr Healey was quoted as saying last weekend, `under-...

A poor week for Anglo-Soviet relations. Embarrass- ment and accusations abounded in the strange affair of the 'mentally ill' scientist Vladimir Tkachenko, who had been rescued...

CHRISTOPHER HOLLIS Far-called, our freight trains start away Without a second man to drive And Sidney Greene declines to say If they are likely to arrive, While British...

POLITICAL. COMMENTARY ALAN WATKINS Some years ago, in America, I would be asked perfunctorily about the operation of the British political system at local level. My...

AMERICA MURRAY KEMPTON New York—At the Waldorf-Astoria last wet • there was a businessmen's conference on world hunger in the Grand Ballroom (style of Fragonard), while the...

THE LAW R. A. CLINE The role of Cassandra, not a cheerful one, affords still less satisfaction and still greater melancholy when the facts turn out even worse than predicted....

A choice of evils

EDUCATION JOHN VAIZEY Much of the argument about education is fundamentally about money. It is, for example, the lack of money to spend on adequate school buildings and...

DENIS BROGAN It has been a week of generally depressing news: tedious squabbles over Test matches, over possible visits of the honest men of Yorkshire to Rhodesia. It has also...

THE PRESS DONALD McLACHLAN Has it ever occurred to you how bad the TV Times is, how difficult it is to find things quickly in it, how its feature articles read like handouts?...

Peace at a price

MEDICINE JOHN ROWAN WILSON The names of most groups of drugs are either couched in an intimidating scientific jargon or they have a negative, defensive sound to them. Words...

J. W. M. THOMPSON I can't remember a time when the political parties have simultaneously run into such trouble with their public relations. It's no novelty for one or other of...

PERSONAL COLUMN AUBERON WAUGH Nobody who watches television or reads a newspaper can be unaware that there are pockets of dire poverty in this country. In- quiries, exposures,...

Disraeli does the country squire better and better every year . . . and has now attained (in all but visual expression) to the admirable local flavour of a true Buckinghamshire...

ANTHONY BURGESS My first copy of Gerard Manley Hopkins's poems was the second edition of 1930— a slim blue volume about the same size as the newly published selection (chosen...

TIBOR SZAMUELY On Trial: The Case of Sinyaysky (Tertz) and Daniel (Arzhak) Documents edited by Leopold Labedz and Max Hayward (Collins/Harvill 42s) The official definition of...

ALAN CLARK The Institute for Strategic Studies has, over the last ten years, sponsored the publication of a series of works of unusual merit on defence subjects. It should be...

PEREGRINE WORSTHORNE Thirty years ago writers and intellectuals took sides over the Spanish civil war with absolute certainty of their own rectitude. A compilation of their...

The Englishness of English art ARTS

HILARY SPURLING It was a happy thought to persuade Karolos Koun, familiar from the spectacular visits of his Greek Art Theatre, to direct Romeo and Juliet for the Royal...

CINEMA Kids' stuff PENELOPE HOUSTON At the press conference after Our Mother's House, someone asked whether Jack Clayton had ever before made a film about children. One was...

ART PAUL GRINKE The Anthony d'Offay gallery, with laudable enterprise and scrupulous attention to detail, has mounted the first show of Hokusai draw- , ings to be seen this...

RADIO HENRY TUBE ' In spite of all appearances to the contrary, it is just possible that the reincarnation of the Light Programme as a two-headed monster—Radio 1 and 2, or Pop...

Banking: a question of confidence

FINANCE '67 A SPECIAL SURVEY DAVID MONTAGU The years from 1964 to 1967 will be remem- bered as particularly trying by the banking community of the City of London. It is not...

LIFE ASSURANCE NICHOLAS DAVENPORT Taking round figures it may be said that savings in what is known statistically as 'the personal sector' of the .economy are running at about...

From suspicion to success

UNIT TRUSTS PETER WALKER, MP It was a little over ten years ago when, walking to lunch in the City, I met a personal friend, the then new Member for Taunton, Edward du Cann. I...

BUILDING SOCIETIES CHRISTOPHER FILDES Like being hanged in a fortnight, having Mr Aubrey Jones investigate you concentrates the mind wonderfully. Bankers, brewers, building...

CUSTOS The market quickly shrugged off its fit of de- pression caused by the bad trade returns, the labour troubles, the postponement of the BP interim dividend and the...

quite right. I was being ironic. Incidentally, thanks to my odd typing, I appear in the same paragraph to have invented a hitherto unknown French divine, L'Abbe (or le Pere)...

Sir: It is amusing to discover from Sir Denis Brogan that the Reverend Ian Paisley with all his Protestant zeal yet wears a Roman collar; but even he deserves his full title. He...

Sir : Professor Brogan, turning from scholarship to journalism, has

mislaid accuracy. I never asserted that if I had to leave Britain I would rather live in the Soviet Union than in the United States. I have left Britain and I am living in...

Public ends and private means Sir: In his letter t15

September) Mr John Ashe invokes the name of the Monday Club to in- validate the suggestions made in your recent editorial as a basis for Tory social policy. As Chairman of the...

Vietnam: How to end the war

Watts uses his closing rhetorical ques- tion to impress on us that he wants 'a society in which everyone can live within reasonable access of the open countryside.' Not many of...

Sir: One of the disturbing features of the present debate on overpopulation problems is the specious arguments against family planning which are pro- duced in the press by those...

Sir: I have been asked by Lady Appleton to write A S,he life of Sir Edward Appleton, and would be most grateful to hear from any of your readers who have letters or other...

Sir: I think that Ned Sherrin slightly misquoted a song in his interesting review of a book about Cole Porter (15 September). The first two lines in his quote from `Down in the...

Sir: In his article on Aden (15 September) Mr D. C. Watt makes a somewhat unhappy and in- accurate reference to the Ruler of Bahrain, HH Shaikh Isa. He is in fact a young ruler,...