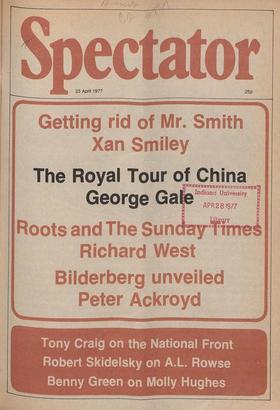 End of the industrial age

It may well be that President Carter's address on the en ergy question will be seen in years to come to be a tu rning point in post-war history. The formal acknowle ugement by...

Kirk's legacy John Grigg Peter Kirk was the youngest MP when, in 1955, he was first elected to Parliament (rather luckily, through a split Labour vote at Gravesend). He was...

Or David Owen bears an uncanny resemblance to those nice, polite young men who used to stand around in striped trousers in Posh shops like Fortnums . and Harrods, advising...

Off the back of a lorry Auberon Waugh The reason that Balzac has survived so well as a novelist, it seems to me, is that he was never frightened of piling on detail which must...

George Gale Hong Kong Mrs Thatcher's Chinese trip, which I supPose ended in its way at her press conference here in Hong Kong on Monday evening before she and MPs Douglas Hurd...

It all depends on Smith

Xan Smiley Salisbury An aura of unreality and disbelief is now beginning to encroach on the plastic bourgeois charm of orderly, sunny Salisbury. Policemen still dawdle in the...

Peter Paterson Washington While Mr Andrew Young was pursuing his ego trip as US Ambassador to the United Nations—indeed, just as he was denouncing the British as the inventors...

John Horgan Dublin A day or two before the 1965 general election to the Northern Ireland Parliament at Stormont I happened to be talking to Cardinal Conway in the ugly but...

Richard West BY - elections tend to take place in Labourheld constituencies, because Labour MPs are more likely than others to die of old age, to get highly-paid jobs in the...

Tony Craig There is an alley in North Kensington where in January the Greater London Council erected signs stating: 'Several robberies—some violent—have taken place here and...

Colin Bell Edinburgh All kinds of institutions testify to Scotland's persistent difference from England: some real, like the church and the law, somebogus, like the Royal...

Mary Kenny What will the lady of fashion be wearing this spring and summer? The prevailing mood, for day wear, is social realism. The most recent inspiration comes straight...

Peter Ackroyd The Bilderberg Group is to hold its twenty-fifth meeting on Thursday, at the Imperial Hotel in Torquay. The Group, which will this year i nclude Margaret...

Blinkered Jeffrey Bernard I wish I could see something other than The Minstrel winning the 2000 Guineas. I was very keen on Tachypous before he got beaten at Newbury—a lazy...

Market collective wisdom Nicholas Davenport A correspondent was apparently intrigued by the chart I gave last week of the FT index of industrial equity shares covering the...

Sir: This is not to review a reviewer whom I have not seen for many years, but to correct one mis-statement of fact. Mr Alastair Forbes wrote on 16 April that I have 'still...

Sir: Your critic, Brian Inglis, in his review of Andrew Boyle's The Riddle of Erskine Childers (9 April) seems, in common with many other people, to be unable to explain the...

Sir: There is one significant omission from ' Tony Craig's article on the NUJ London Freelance branch (2 April) which helps to explain its many errors of fact and...

Sir: Do you pay Alastair Forbes (16 April) to be

bitchy as well as inaccurate? Could anyone else who knows the Mosleys, or has merely watched them recently on the gogglebox, endorse the portrait of Oswald doddering into dotage...

By hand of messenger

Sir: Sure, the letter I wrote to you a couple of weeks ago was delivered by hand. But by a Post Office messenger using the new door to door express service. I was trying to...

Sir: Stephen Gardiner (9 April) might have good cause for calling down Christopher Booker's attack on the rationalism of Le Corbusier but he is hardly helping it by insisting...

Sir: Eirwyn Thomas, defending the revival of the Welsh language (Letters, 26 Marc 11) ' appears to be quite unaware of the hideou s deprivation which his Council for the Wel sh...

One last correction to Mr Craig's article. Since he wrote

it, the 'new branch standing orders' he mentions—which, incidentally, permitted him to write the article—have been ruled out of order by the branch chairman following certain...

'Roots' and the Sunday Time Richard West Roots Alex Haley (Hutchinson £5.95) As long ago as the mid-eighteenth century, a Negro slave from North America who had been given...

Robert Skidelsky Homosexuals in History: A Study of Ambivalence in Society, Literature and the Arts A. L. Rowse (Weidenfeld and Nicolson £7.95). Many exceptional people have...

The poet as boor

Benny Green A London Child of the 18709 Molly V. Hughes (Oxford Paperbacks 95p) T he casual wanderer through the muddle of streets between Highbury and the Angel, Islington,...

Andrew Crozier Slinger Edward Dorn (Wingbow Press) Most American poets worth their salt seem to feel challenged at some stage in their careers by the idea of the long poem, and...

More night music 8 rYan Robertson If I had several millions, which I've been e xpecting with mounting impatience for several years now, I'd give one of them to Robin Howard,...

Museums in the future

Eugene Victor Thaw Since the first report in these pages on the proposed Annenberg Center for Communications to be located in New York ' s Metropolitan Museum and headed by...

The truth Clancy Sigal Above Us the Earth (The Other Cinema) Good film documentaries can be invaluable muckraking, sometimes almost in the literal sense. Karl Francis ' s...

Steering clear Ted Whitehead Blisters (Bush Theatre) Out of Our Heads (Royal Court) If you steer clear of the West End there's a lot of interesting theatre around, much of it...

Innocent eye Richard Ingrams A few weeks ago I watched part of a rather d boring programme on BBC 2 which showe down Arthur's Round Table' being taken 'own from the wall in...