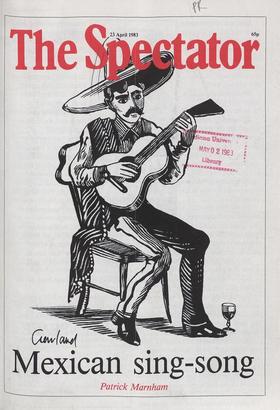 D espite all her protestations about the wickedness of 'throwing money at pro- blems', Mrs Thatcher and her government still instinctively react in this way when an embarassing...

Donna Quixote Colin Welch A recent letter in the Guardian attacked alleged Government plans to muzzle, pollute or take over the media in the event of a major international...

A London Airport there is what seems like an interminable wait for our lug- gage to come through on the conveyor belt. When I first enter the gloomy baggage hall it is already...

Oversensitive Auberon Waugh N obody in that select band who read his early novels can doubt that David Pryce-Jones was once a very sensitive young man. His heroes were always...

Patrick Marnham W e are sitting in a booth in Tenampa, a ar in the Plaza Garibaldi. A man is singing to us. He has a face like a rubber monkey and the most mischievous eyes in...

Nicholas von Hoffman P resident Reagan arrived for a visit in the western Pennsylvania area the other day where the unemployment rate is runn- ing around 17 per cent. This is a...

Now it can be told

Bohdan Nahaylo T ast week the Soviet-backed Karmal Laregime in Kabul disclosed unusually frank and sombre details of the military stalemate in Afghanistan. According to the...

Christopher Hitchens I n the course of last summer, I wrote an article for a New York paper which described one of the President's speeches as foolish, commonplace and...

Richard West Rouen T he feelings of many Frenchmen were well expressed in an editorial of the Rouen Liberte Dimanche: 'Fallen again in- to poverty, France will once more find...

Peter Villiers It was recently suggested in the Times lEducational Supplement that there should be an '0' level examination on nuclear weapons. Since many people find the...

The full operation of the remission of the passenger-duty effected by Mr Childers is not yet perceived. It will not only enable the Companies to improve third-class travelling,...

David Butler O ne of the fascinations of psephology is that the study of constituencies is the study of Britain. For the last thirty years, travelling about the country, I have...

Peter Paterson O ur trainload of orphans had arrived in 1944 in Port Talbot, fugitives from the German V-2 rockets, our minders hav- ing been promised that we should all be...

Ancestral voices Paul Johnson T he eclipse of Christopher Ward as editor of the Daily Express is a sad but instructive tale. A serious young man from the Daily Mirror, he has...

New English Sir: Geoffrey Wheatcroft, in yet another of those snide attacks on the use of modern English in Christian worship which keep ap- pearing in your journal, sums up...

Sir: Lord Zuckerman's excellent article 'Nuclear storm warnings' (9 April) seems to me to contain one error. 'The Russians,' he writes, 'believe that NATO forces may one day...

Sir: I greatly enjoyed Mr Kendall's ad- mirable article on Trotsky and the Trot- skyists (16 April). I would however query one of his facts. He says that Trotsky served as a war...

Sir: I can explain why I am not in Who's Who. Many years ago I did indeed follow Richard Ingrams' advice (2 April) or rather anticipated it, and embarked on Who Real- ly Is Who....

Sir: I wonder what point Alexander Chancellor's article on Hebron was intend- ed to make (26 March)? The Israel/Palestine problem is nearly a century old. What is needed now is...

Sir: In your issue of 26 March under the heading 'A vintage viscount' you printed a delightful piece by Alan Rusbridger about my noble neighbour here in Kent, Viscount...

NEXT WEEK Jo Grimond reviews a new biography of Churchill;

Graham Greene through the Looking-Glass Malcolm Muggeridge The Other Man — Conversations with Graham Greene Marie-Francoise Allain (Bodley Head £6.95) I n her long dialogue...

The anachronistic approach to Shakespeare

Eric Christiansen Jean-Jacques: The early life and work of Jean-Jacques Rousseau Maurice Cranston (Allen Lane £14.95) It was a bad day for the world when J-J Rousseau decided...

Nigel Nicolson The Oxford Book of Death Chosen and edited by D.J. Enright (Oxford University Press £9.50) I was reading this book seated at a bar. The barmaid, stealing a...

James Hughes-Onslow A Reed Shaken by the Wind: A Journey through the unexplored marshlands of Iraq Gavin Maxwell (Penguin £2.95) Travels among the marsh Arabs with Wilfred...

Francis King In Search of Love and Beauty Ruth Prawer Jhabvala (Murray £8.50) I n some degree, every novelist is an agent in a hostile country. By appearing to be like all its...

Long overdue John McEwen R ichard Long's partial retrospective in his home town of Bristol and unveiling of new works at Anthony d'Offay off No v . Bond Street are the 79th...

The long goodbye Peter Ackroyd The Sisters of Wilko (PG', Camden Plaza) T he first word of the film is 'Death': there is nothing like an arresting open- ing. A young man...

Uphill Maureen Owen T he problems of one-parent families 1 and life on the dole seem an unlikely recipe for comedy', say the BBC publicity notes, whose guidance I turned to in...

Crooked Taki New York T shall not g loat because it doesn't suit I me, but I hope every British subject who has the bad luck to own property in Greece g ives me my due. After...

Relentless Richard Ingrams T he BBC's missin g God Slot has finally reappeared now that Omnibus has gone off the air. It is called Heart of the Matter and is introduced by...

Massingham, P. J. Kavanagh W hen I 'studied' Eng.Lit. in the Fifties we were given the impression — or gave it to ourselves — that such studies began, seriously and...

No. 1266: Riddle-me-ree Set by Jaspistos: 'Why is a raven like a writing-desk?' asked the Mad Hatter, a rid- dle to which Lewis Carroll confessed there was no ready answer. You...

Jaspistos reports: Competitors were asked, in the spirit of Chesterton's The Club of Queer Trades, to describe an entirely new and odd method of earning a living. I asked for a...

What's in a name? by Mass A prize of ten pounds will be awarded for the first correct solution opened on 9 May. Entries to: Crossword 604, The Spectator, 56 Doughty Street,...

Dollar rush David Goodman ith its record $100,000 prize fund, the 1983 New York Open was a significant step forward in the promotion of chess in the USA. The tournament (from...

Spectator Wine Club Auberon Waugh T hree cheap whites for the summer months — all from the Grave del Friuli region of north-eastern Italy, near the Yugoslav border; all are...

A least 39 people were killed, and another 140 injured, when a pick-up truck loaded with explosives was blown up in the courtyard of the United States em- bassy in Beirut. A...